My Daze of Brain Injury

The Dance of Destiny 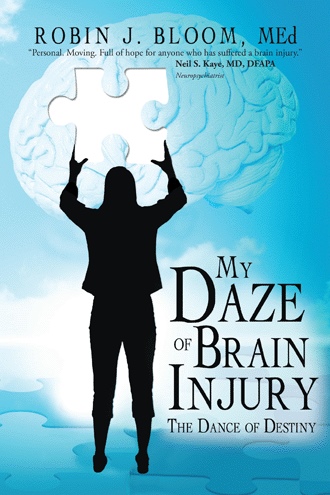 In the gray mist, a man’s face suddenly appeared. His light blue eyes drew me like a magnet to a comforting light; at that precise moment, I sensed he was there to protect me from further harm. Even though I was unaware of what was going on or what had occurred moments before, I felt safe. He spoke gently, asking questions about my children, speaking of his own family, all the while offering words of comfort. Softly, he told me his name was Scott. He was not part of the fire or ambulance crews and I didn’t know where he came from. I later wondered how he happened upon the accident and why he stopped. In that moment, the stranger was the keeper of my heart; love and comfort, which I so desperately needed at that time, were given freely. As I look back, words cannot express the deep love and gratitude I sensed during those brief moments with this stranger. It is the power of human touch that keeps people connected during trauma, even if they are unconscious. Since the time of the accident, several intuitive friends, unaware of the circumstances of the stranger, described the healing presence of an angel at the scene of my near-death experience.

Although I do not entirely recall ambulance workers lifting me from my vehicle and placing me in the ambulance, I do recall an excruciating head pain. I needed the pain to end. (It continued nonstop for months, silenced only by narcotics.) The emergency room experience was sterile and cold. The medical staff members asked many questions and gave so many directions that I struggled to respond. I wondered, What do they really want me to do? The examination and X-rays lasted for several hours. The medical team found that I had chemical burns, abrasions, bruising, muscle spasms, and chest contusions. I was diagnosed with a motor vehicle accident (MVA) lumbar sprain. I received a shot for overall pain along with a note to excuse my absence from teaching for two days, and I was advised to follow up with a family physician.

Someone at the hospital telephoned my brother, Stephen, my emergency contact, to take me home. Stephen and I were always very close and as he was driving me home and trying to comfort me, he exclaimed, “Rob, you’re really lucky!” Instead, I felt confused and lost. The effects of the pain medicine, the accident, and the paradox of my brother’s perplexing words remained with me for a long time.

In the weeks and months following the accident, I remained in an utter state of confusion with vanishing thoughts and constant distractions. I felt alone and unsettled and fought to keep my independence. Numerous times, I lost my way home from shopping. My life consisted of making lists and finding ways to help myself cope with everyday activities. Shopping at the grocery store was a monumental task: understanding which aisle to begin shopping; dodging people and carts; finding the items on my list and the money to pay for my purchases; searching for my car keys and car in the parking lot—all normal requirements to accomplish a mundane but essential task. Memory was fleeting; I thought I was losing my mind after a demanding day of shopping. Amidst these difficulties, I slowly began to perceive the tragic effect and subsequent loss of healthy brain function, a vital activity often taken for granted. These days were the beginning of some of my darkest moments.

Additionally, at this time, my bank account and bill payments were at odds. My body required sleep, sleep, and more sleep. The chest contusions took weeks to heal, as evidenced by how difficult it was for me to feed myself or open doors. The strength to rotate a knob was nonexistent, and its absence was quite humbling, especially for a formerly efficient and independent woman who managed to juggle kids, household, education, and career. Behind the scenes, the “super mom” image was fast crumbling. Friends and family dropped by with cards and flowers, but the occasions were not always pleasant and, many times, were actually depressing. I knew who the visitors were, but I was confused. Why are they here? Nothing is wrong with me. I am not sick or dying. I will be back to work in no time!

“Robin inspires as she shares her stories of brain and spinal injuries. Robin’s horrors of the unknown and recovery are challenges that all survivors face, especially those who encounter a brain injury. Her journey can be summed up by saying, ‘Tragedy … opened doors to happiness I never suspected.’ A mustread for brain injury survivors and their families to better understand this long and tiresome recovery process.”

“Robin Bloom offers a very personal glimpse into the journey that she has faced following major trauma. This work provides a raw and gripping account of her experience and the inner events that helped her survive and rebuild herself. This account will expand your understanding of the human response to a major life changing event and offers triumph from the ashes of a personal disaster.”

Robin’s life changes within a split-second of a tragic accident. The ER finds no visible injuries or broken bones. Yet, confusion and memory loss begin to surface. She emerges from the trauma and finds the life she remembers no longer exists. In a role reversal, this special-needs teacher finds herself a student of her own skills. How Robin discovers and accepts her limitations, and reconciles these life-changing losses, is a story of love, courage and inspiration.
ROBIN J. BLOOM, a first-time author, is a graduate with a BS in Special Education, Elementary Education, and a MEd in Counseling. As a survivor of multiple brain injuries, she is an inspirational writer. Robin resides in Phoenix, Arizona. Visit her website at http://www.robinjbloom.com.

ROBIN J. BLOOM, a first-time author, is a graduate with a BS in Special Education, Elementary Education, and a MEd in Counseling. As a survivor of multiple brain injuries, she is an inspirational writer. Robin resides in Phoenix, Arizona. Visit her website at www.robinjbloom.com.