I Love You Father Bear 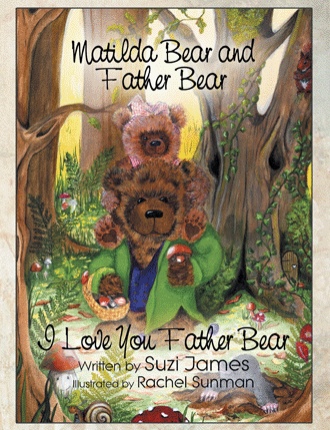 It was Matilda Bear's sixth birthday. She woke up and sleepily drew back her curtains so she could lie in bed and watch the birds through her window like she did every morning. She always enjoyed listening as they chirped, happily eating the grains that Mother Bear had put out for their breakfast. She looked at the sky, and watched the moon as it very slowly disappeared behind the trees surrounding the little log cabin that she and Mother Bear lived in. She waved sleepily, "Bye Bye Grandmother Moon," she said softly, "see you again tonight. Today's my birthday, so when I see you later I can tell you all about my day."

She got out of bed and put a snuggly blanket around her shoulders to keep her warm on the way to the kitchen. She knew that she should be excited that it was her birthday, and any other year she had been, but this birthday was the first one that she had to spend without Father Bear, and she really wished he could be with her. He had made all her birthdays so special, always cooking her a surprise breakfast which he brought to her before she had even managed to get out of bed.

She remembered last year, and the smell of pancakes cooking as she awoke, and then Father Bear bursting through her bedroom door with a pile of them balanced on a plate, dripping with honey, and five lit candles stuck in the top pancake. He had handed her the plate, then gone back into the kitchen to pour her a glass of orange juice, carrying that back into her room in one hand, and her presents in his other hand, whilst singing “Happy Birthday to you, Happy Birthday to you, Happy Birthday our beautiful little Matilda, Happy Birthday to you!” at the top of his voice. Awoken by all the commotion, Mother Bear followed him, looking very sleepy whilst asking him why he had gotten up so early. The truth was, Father Bear was even more excited than Matilda about all the presents she was just about to open, and it was his excitement that prevented him from sleeping, so he got up really early and started cooking the birthday breakfast.

Matilda remembered the first present she had opened that day, and looked round at her pillows where it lay now… A beautiful little rag doll that Mother Bear had made for her. Matilda had named her Elizabeth, and she cuddled up to sleep with her every night since Father Bear hadn't been there to cuddle Matilda himself. When she felt sad she held Elizabeth close to her, and told her what she was worried about, and when she couldn't get to sleep she shared with her doll all that was going through her mind.

Sometimes during the day she and Elizabeth would go into the garden and put a blanket down on the ground, and Mother Bear would bring out a selection of food which usually consisted of home baked bread, sticks of celery and carrots, and humous to dip them in, together with apple slices and grapes, and they would all have a picnic together.

That's what they had done last year for Matilda's birthday tea, and as the day drew to an end and it had begun to get dark, Father Bear lit tea lights and placed them in lanterns all around the outside of the blanket they were sat on. The warmth from the tea lights gave them such a cosy feeling, all three of them happy to be together, enjoying the early evening as it drew in. They had sat quietly listening to Barney the owl “who-whooing” in the distance, and Tokala the fox calling her cubs, and everything had felt so magical.

Father Bear had brought all the balloons outside and tied them to the wooden railings on the steps into their garden, and a little later in the evening one of them came untied and gradually rose up into the air. Father Bear had started chasing it, slowly running to start with, and then realising the speed at which the balloon was moving, his run soon turned into a sprint, jumping up and down trying to catch the balloon as it rose up into the sky. Mother Bear and Matilda had sat watching his erratic shadow disappear into the night, and sat there laughing as they could hear him in the distance cursing the balloon, whilst his feet made thudding noises each time they reconnected with the ground. He never did catch it, but came back to the picnic blanket with bits of leaves and twigs sticking out of his fur… He had been so focused on the balloon that he had forgotten about the surrounding trees and bushes and had collided with them as he ran!

Remembering that last birthday with her Father made her feel sad, and she pulled her snuggly blanket even closer around her for comfort as she walked into the kitchen. Mother Bear was stood at the aga stirring something in a saucepan, and turned and smiled at her daughter as she heard her little bear paws approach. “I was going to surprise you with breakfast in bed like Father Bear always did for you, but you've beaten me to it! Do you want to get back into bed and I'll bring it to you?”

Matilda Bear looked at her mother, smiling a 'thank you' smile, but replied that she'd rather sit in front of the warmth of the aga. “I'm feeling really sad that Father Bear can't be with us today, and would rather just sit here awhile and watch you finish cooking my surprise breakfast.” Mother Bear stopped stirring, and picked her little daughter up in her arms, hugging her closely. She carried her over to the rocking chair by the hearth where she sat her on her lap, and held her little furry face in her hands.
“Your daddy loved you very, very much,” she started to say, “and he wouldn't want you to be sad on your birthday. If he could be here today he'd have candles, and party poppers, and silly hats for you… You know what he was like! And we should still do that, because that is what he would have wanted.” She hugged Matilda closer to her, “He wouldn't want you to be sad… He'd want you to continue to have a happy life, and hold all your memories of him in your heart wherever you go. So let's make a cup of tea, and make Father Bear one too in his mug, and we can sit around the table, and talk to him, just as if he were still here. You never know, he may be able to hear us.”

Matilda smiled, and knew that Father Bear would like that, so got his mug out of the cupboard whilst Mother Bear filled the kettle. She then brought a big bowl of porridge and honey over to Matilda, and when the kettle whistled that the water was boiling, she poured the hot water into the teapot and placed it on the table too.

“Your father had been making something for you little bear,” she said, “but sadly he didn't get the chance to finish it before he went to live with the angels.” She brought a box out from the huge pine dresser that was in the kitchen storing all their colourful crockery, and put it on the table in front of her daughter. Matilda Bear suddenly felt a really warm feeling around her, just like she always used to feel when Father Bear was with her. The feeling was so strong that she looked around to see if he had come into the kitchen, even though she knew that he couldn't possibly have done so. And as she had thought, he was nowhere to be seen, so she brushed the feeling aside, and began opening the box, feeling sad that he wasn't with her. She started to pull out pieces of brightly coloured tissue paper, and amongst it all found a beautiful wooden crib. “Father Bear made that for you from fallen wood that he had collected from the forest floor,” explained her mother.

With tears in her eyes, Matilda smiled up at her. “He's shaped the most amazing carvings,” she whispered, running her paw gently over the carving marks on the side of the crib that was poking out of the box. It was just the right size for her doll Elizabeth that Mother Bear had made the previous year.

Matilda Bear wakes early on the morning of her sixth birthday and gazes out of the window. She misses Father Bear more than ever and remembers the wonderful times she used to spend with him, wishing she could share today with him too. But she feels as if her father is with her still, which confuses the little bear, as she knows that he is now living with the angels. Embarking on a magical adventure through the forest with her best friend, Lucy Rabbit, Matilda seeks to understand why Father Bear feels so close to her.
Joined by their two friends, Digger the mole and Nutty the squirrel, their search leads them to a world of enchantment. Along the way, Matilda learns the true meaning of friendship, the importance of following her heart, and discovers that magic is all around us, as long as we trust and believe. And she learns that our loved ones never really leave us …
Matilda Bear and Father Bear is a story for children and adults alike, which explores the spiritual journey that occurs when a loved one passes over, blending the myths and traditions of the Druid and Native American people.

Suzi James is an experienced spiritual counsellor and healer who works closely with her main spirit guide, whom she affectionately calls Bear. He has guided her throughout the creation of this book. Suzi is passionate about animals and nature and creates collector’s bears inspired by the forest around her.
Illustrator Rachel Sunman was born in England, where her love of nature led her to follow her heart and seek out hidden worlds among the forest undergrowth and find comfort in tree spirits. She lives in Limousin, France with her husband and two daughters.