The Secrets of Magic and Metaphysics

Book One of the Chronicles of El Miron 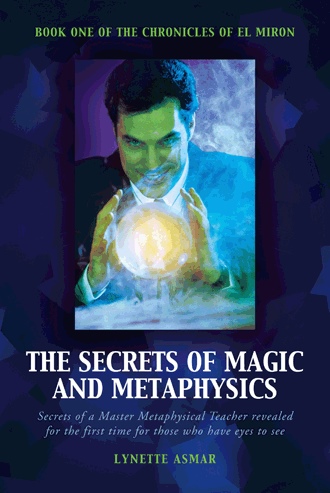 I raced up the stairs of Mitchener’s house and entered. I knew he’d be in the lab with his assistant, John Korner. I found him bent over a globe of swirling colours, muttering some sort of incantation. “Dr. Mitchener! Sorry I’m …”

He didn’t look at me. His eyes were glued to that globe as if it would disappear if he took his eyes off it, even for a second. His concentration was so intense that I could see thin strands of light emanating from the chakra between his eyebrows.

“Thank you for coming, Stanley,” he muttered half to himself after what seemed like quite a while. “I want you to be witness to a very unusual event.”

“I hope it’s as good as the last one,” I said. “That experiment was something else! But what about …”

I was cut off midsentence by the arrival of Susan Radcliff. She must have overheard my comment, as she just smiled to herself as she put some folders on the table.

“Um,” Mitchener said absently, “oh, don’t you worry about that, Stanley. This will be every bit as interesting. More so, in fact, because I have discovered an ancient code that has been staring me right in the face for a long time. I just couldn’t see it until now.”

He was still busy moving his hands just above the opening in the globe. There seemed to be something that looked like an electrical current projecting from his hands, causing the colours in the globe to swirl and grow very bright. For a moment, I thought (unless it was a trick of my imagination) I saw a figure in the globe. I shut my eyes and shook my head. When I looked again, all I could see was pulsating light. Mitchener finally seemed satisfied with what was going on in the globe and uttered a sigh of contentment.

He turned and looked at me, his blue eyes almost sparking with energy and a half-smile playing about his lips. Then he turned back quickly and placed his hand on the side of the globe. Swirls of colour immediately began to furiously dance inside.
“Ahhh! Perfect,” he whispered. “Just perfect!” He looked at John for a moment and then at me before he said, “I’ve got some work to do in the adjoining lab for about ten minutes. Whatever you do while I’m away, don’t touch that globe!” Almost as an afterthought he added, “Then I will tell you about the code.”

Striding out toward the other lab, he absently said, “Come, Susan, I need you to take some notes.”

I could feel the heightened energy in the room. It produced a strong feeling of excitement in me. It was almost tangible, like something I had never felt before in the lab. I walked over to where John Korner was standing and peered over his shoulder. There were open notebooks on the bench, with strange looking symbols resembling hieroglyphics on the pages. Perhaps this was the code Mitchener was talking about. I asked John what was going on, but he didn’t seem to know much more than I did. We stood looking at the globe, and then I moved over to get a better look.

I leaned closer, fascinated by the slow, pulsating light. As John peered closer as well, he must have somehow touched it, because the colours immediately started to dance and swirl.

“You must have; the thing doesn’t go by itself!” I said.

“I wonder if I can get the same effects Mitchener does,” John mused almost to himself. “Perhaps I’ve got some strange power, too,” he said, grinning wickedly at me.

“Be careful, John,” I said. “It’s dangerous to play around with powers you know nothing about, especially those Mitchener works with. You know we’ve got into trouble before, accidentally of course, because we weren’t paying enough attention.”

John didn’t appear to be listening; he had a strange look on his face, almost as if he were mesmerised. He gingerly touched the globe with the tip of one finger, and immediately, the colours appeared, forming into images that gradually faded into nothingness. He placed another finger on the globe. There was a frenzy of colour at first, which gradually settled into an opaque whiteness.
“See, Stanley, look at this! A touch just makes the colours swirl. A touch accompanied by a thought produces images. Wow, this is amazing! I wonder …”

All at once an eerie glow filled the room, but our eyes were drawn once more to the globe. Strange visions seemed to be fighting for dominance, and a vapour started to rise from the top of the globe.

The energies began to disorient me, and I yelled at John to take his hand off it.

He ignored me. “Look, Stanley, look! There’s a woman in there, and she’s trying to tell me something.”

I tried to pull his hand away, but he shoved me aside, and I tripped and fell. I managed to get myself up on one elbow, but I was horrified to see that the whole room was filling with a white, vaporous haze. My blood froze as I watched it form into impalpable bodiless apparitions.

Strange faces moved forward, looking at me intensely, before fading back into the mist. A vortex of some sort was forming out of the mist, rotating counterclockwise, growing bigger by the second as I watched. A soft humming vibration started to pulsate, and I could feel my whole body being affected.

He looked over to where I was on the floor, his face flushed with excitement. “You think I don’t know what I’m doing, Stanley?” he asked. “I could stop this any time I want to, just by removing my hand, see?”

But his hand was held fast by some invisible force, and the vibrations in the room increased in intensity to the point where I could discern a throbbing hum. The rotating vortex moved around him, and I heard him calling to me as if from a long way away.

“Stanley, help me, help me! Get Mitchener, quickly!”

Stanley always knew that his spiritual aspirations would cause a problem in his relationship with Catherine, but being an apprentice to a powerful metaphysician was the most important thing in his life, and he was totally committed to it. Stanley’s, fellow apprentice, John Korner, gets sucked through a magic globe that is really a portal to the fourth dimension. In spite of all the frantic efforts to rescue John, he remains imprisoned in the dreaded lowlands of the fourth dimension by an evil sorcerer who is under the control of demonic forces. Stanley meets an earth zone intelligence, Amouki who decides to assist him in rescuing his friend. She helps him as he travels through dark and dangerous realms on his perilous journey and allows him to experience practically the things about which he has only basic theoretical knowledge. Even though he meets many beings of the light force along the way, this journey is taken at tremendous personal cost as he is forced to take spiritual initiation before his time so he can activate his newly awakened abilities at the crucial moment of confrontation with the dark forces. He will be forced to make a decision that will totally change his life and the lives of those he loves most dearly. Will he ultimately lose the woman he loves, and will all the hardships connected with reaching a new level of consciousness be worth the tremendous effort required to learn the secrets of magic and metaphysics?

Lyn Asmar has been teaching a profound spiritual Path of Return to the Source for the past 35 years under the guidance of a group of beings known as the Sirian Command. In this lifetime, Lyn came specifically to teach this particular path and to awaken others to their true spiritual potential.