Any Kind of Danger

Building our connection with animals. A veterinary surgeon reflects on animals of the planet 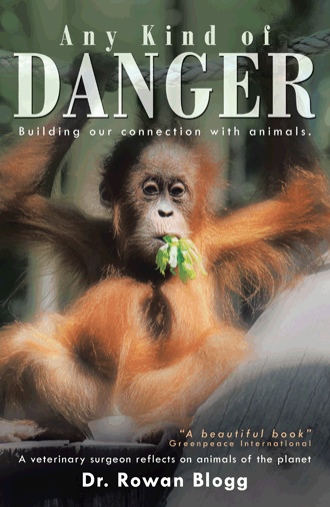 Terre et Faune president Dr Catherine Tschanen says ‘Within 20 years 40% of wildlife species of the planet will have disappeared ‘.

Know the animals, respect the planet, love thy neighbor.

Rowan Blogg is an Australian veterinarian of the highest distinction and I greatly admire his professionalism, which I observed for years at close range.

In Any Kind of Danger he has extended his work into the environment and moral philosophy by tackling the complex issue of how we exploit animals. In the 19th Century William Wilberforce and other pioneers argued that our treatment of animals is a measure of our humanity. Peter Singer’s Animal Liberation (1975) stimulated international interest in the subject. Dr Blogg’s book should do the same.

Rowan Blogg examines the role of wildlife on the planet, millions of years before our species became dominant, but how much habitat do we reserve for their natural life? How many species are under threat?

The world’s population will stabilise at about nine billion in 2050 – and this raises the fundamental issues of how much land, water and energy we will devote to raising animals for food. Is grazing an efficient or humane way of feeding our species?
Industrial farming – out of sight and out of mind – involves inescapable cruelty. Chickens are raised on an A4 size of smaller ‘scratching area’, confined in multi-layered cages.
Do animals have a right of access to sunlight and paddock for at least the great part of their lives? How does a cow giving birth cope with a crowded cattle truck?

Do we turn our eyes away from the inevitable suffering involved in animal transport, especially life sheep exports?

There are profound moral lessons to be learned from observing how we treat animals – and yet the issue will not be on the agenda for the next Federal or State elections.

Dr Rowan Blogg, Diplomate of the American College Veterinary Ophthalmologists, was the first registered veterinary specialist in Australia and pre bono vet for the Seeing Eye dogs for 25 years. His books include Everydog with co-author Eric Allan and four volumes of The Eye in Veterinary Practice.

In 1998 he was Professor of Veterinary Ophthalmology at Ross University.