Conversations with a Duck

And the End of Separation!

by Grant A. Watson 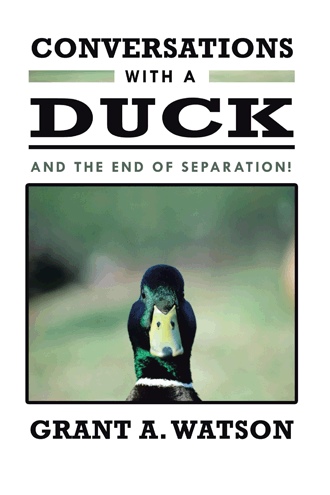 These feelings are just choices … not emotions, as you call them. Aren’t they, T’narg? Emotions are energies in motion. You have chosen the way in which your energies will flow. You know that was your choice. Remember that emotions are best not confused with compassion, understanding and the empathy procured from wisdom. This is entirely different. We all feel alien and confused at times; at times we all search for a different path to happiness, one that promises more than the status quo. We feel this path must exist. Blessedly, it exists inside of each of us; by learning to ask the right questions, we will change our lives with the answers we find. In Conversation with a Duck, reverend and spiritual healer and councilor Grant A. Watson brings us an indispensible and universally accessible guide to finding joy and finding our true selves in the midst of the wild flow that is life. Framed as a candid, personal question-and-answer story between an ordinary seeker and a knowing teacher, Conversation with a Duck explores with us the essence of love, peace, faith and the evolution of the human experience. Through T’narg’s honest and heartfelt searching, we find our own path out of frustration, out of grief and into, finally, being able to simply trust and be.

Reverend Grant A. Watson has traveled the highways and hallways of the spiritual world for over fifty years, spending many of those years as a Reiki Master, spiritual life coach, crystal healer, tarot reader and psychic councilor. Grant lives to help others see the value in pursuing joy. He currently lives in New South Wales, Australia.