oral health is the missing piece, adding years to your life, and improving your overall well-being! 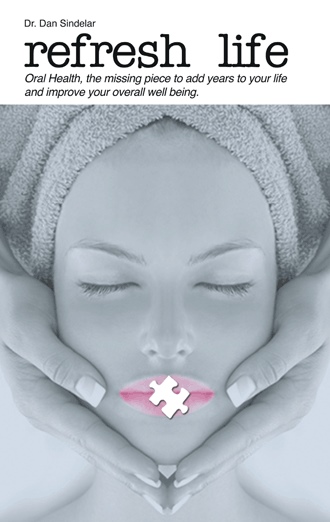 Introduction
I would like you to join me on a very important journey.  The message is simple: “your total health depends on good oral health!”

We will examine why this is so important, and then we will explore the new approaches that can completely change the way you “REFRESH YOUR LIFE.”   Oral health is the missing piece.

The research is mounting daily. Lack of ORAL HEALTH is a major risk factor to your body's total health.  The mouth is where life begins. So when, where, how and why did the mouth become separated from the rest of the body?  Medical research is finding oral bacteria to be associated with cardiovascular disease, stroke, cancer, diabetes, preterm birth, and Alzheimer's, just to name a few. What's reassuring is that we have ways to test for and prevent these potential killers...at the dentist's office.

The whole idea of Refresh Life is to open a door to your health, and then help you understand how crucial it is to care for your teeth and gums. I truly feel this is the new 'no smoking' cry for health. Bleeding gums may be as important to your overall health as not smoking, so you can see why we need to get this message out there!

Over the years as a dentist, I have noticed that most of my older patients in their 80s and 90s that were vibrant, living active lives, and had a lot of positives in their life, all had very healthy mouths. They had what I call young gums. I would often joke with them that they had the 'gums of a teenager'.

On the other hand, I noticed most of the older, non-compliant gum disease patients who took poor care of their oral health and refused any recommended treatment lived very unhealthy, disease-filled lives. They looked older than their age, and were almost never a part of the group of patients in their 80s and 90s. They always seemed to 'move on', passing away before they reached these decades of their life.

This is a pattern I've observed over the years, and with all the new revelations from research into deadly diseases being linked with oral health, you can see where I get my passion for this subject! Study after study confirms that good oral health is essential for our overall well-being, and lack of good oral health is proving to be a major risk factor to our health.

I hate to tell you this, but you probably have gum disease. In fact, the Guinness Book of World Records lists gum disease as the #1 most prevalent inflammatory disease in the world. Not only can gum disease kill you, 90% of it goes untreated. This has become a life and death issue!

Researchers have confirmed that gum disease is directly connected to the top two killers worldwide—heart disease and stroke. We are also seeing scientific clues pointing to other diseases being associated with gum disease, like diabetes, kidney disease, and Alzheimer’s.

Are you surprised? The real question is why our advanced civilization would allow such a thing. Yet, periodontitis (gum disease) is more common than the common cold! Is it any coincidence that cardiovascular disease, diabetes, and stroke are also very common afflictions?

If we would take the surface area of the pockets around our teeth, the amazing thing is it would be the size of the inside of our forearm from our elbow to our hand. Try to imagine if it was bleeding and infected just like our gums often are. We would be rushed to the Emergency Room and treated Stat! And yet the same amount of area in the mouth is often overlooked. I’m here to say that with today's awareness of the Total Body Health Connection we can no longer ignore this!

You see, gum disease causes chronic inflammation. Inflammation is the body’s first defense against infection, however when it is chronic, it can lead to a response in the body that brings on heart attacks, colon cancer, diabetes, stroke, Alzheimer’s, kidney disease, and a host of other chronic and deadly diseases. I will look at this in greater depth later on, so you can understand just why something that is usually a good reaction for our bodies to have can turn so deadly.

Gum disease also allows harmful bacteria to enter the bloodstream. Gums infected with periodontal disease are toxic reservoirs of disease-causing bacteria. The toxins produced by the bacteria attack the gums, ligaments, and bone surrounding the teeth to produce infected pockets that are like large infected wounds in your mouth. The infected pockets give harmful bacteria access to your bloodstream, allowing it to travel throughout your body. These mouth bacteria are found to be responsible for many diseases and problems within the body, something that even a decade ago we did not realize.

The American Academy of Periodontology (AAP) asked the Center for Disease Control and Prevention to make monitoring oral health a priority as recently as August of 2010. Not only have studies shown that the rate of periodontal disease is 2-3x higher than formerly believed, the link between oral disease and general disease has been firmly established and must be made a national priority.

This is serious business. We need to wake up and see the connection of good oral health to our overall health. Gums are the early warning system that too few know to watch for!

The goal of this book is to bring about increased public awareness through education in order to diminish overall rates of disease in America...and around the world! My objective is to alert you to what’s going on behind the scenes in your mouth in a way that will encourage you to make oral care a priority.

Let’s look at a fictional account of an average American man. We’ll call him Bob. Bob’s father died after his third heart attack, despite everything the he could do—change of diet, regular exercise, keeping on top of medications and doctor visits. Bob’s mother is doing well except for the awful rheumatoid arthritis that makes everyday activities a nightmare. Bob’s wife has just been diagnosed with cancer and is preparing to undergo chemotherapy.

Bob’s sons are both in their twenties, healthy and vital. The sad part is, they view what is happening with their parents and grandparents as just the way things are for aging human beings. I say it doesn’t need to be this way. Of course these boys would pay anything for a cure, and they talk about making sure they stay fit and healthy, but they may be missing one key line of attack to avoid their own run-in with the same diseases that afflict the older generations of their family.

This book could help ease Bob’s mother of her joint pain, and may have added years onto his father’s life. It may also help Bob’s wife survive cancer, and keep him from his own lengthy stay in the hospital. But most importantly, this book and its message could revolutionize the quality and quantity of life for those twenty-something boys. It could keep them from ever having to face an awful diagnosis of deadly disease.

See, there is one big message that I want you, dear reader, to get from this book. Whether you read on to learn more, or not; whether you care to take action on what I have to say...or not; I just want everyone to understand one simple thing:
Poor oral health will eventually lead to deadly disease.

Your total health depends on the state of your oral health. Thanks to media coverage, we know this, but how well do we really understand the significance of the recent discoveries of medical research? The connection between gum disease and cardiovascular disease, stroke, diabetes, or Alzheimer's is now uncomfortably clear.
A true Missouri native, Dr. Sindelar was born and raised in St. Louis, and has served the people of this area with excellent dental care since taking the reins of Sindelar Dental in 1981.
In Refresh Life, Dr. Dan Sindelar opens a door to your health, showing you why it is so crucial to care for your teeth and gums, and how to go about refreshing your whole life by simply taking better care of your mouth.
Add ten years to your life by reading this book. www.refreshrightnow.com