How to Be a Wizard in the 21st Century

by Mario Garnet & Cover design or artwork by Tamara Starr 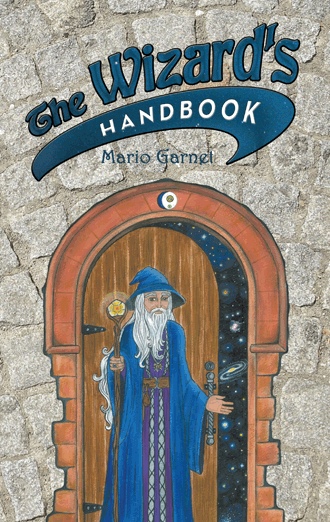 THE JOURNEY
Let’s grab our imaginary broomsticks and glide through Disney’s® Wizarding World of Harry Potter™ in Hogsmeade where we see a gathering of novice wizards under an archway atop a balcony platform overlooking Hogwarts Castle. Behind us is the landmark owl and wizard statue.

The group seems to be listening to someone. Aha! It appears to be Headmaster Muhlaton of the Virtual School of Wizardry (a learn-at-home discourse). He is a tall lean man with very little hair on top sporting a goatee of sorts. Wearing a multi colored gown of light, he speaks in a low but projecting voice, the kind that demands attention yet offers solace. Let us hear what he is saying …

“Fellow students of life and magic, both new and ancient souls, it is with great pleasure I invite you to explore your possibilities as we journey together through the many Grottos of our virtual school, learning about the many magical features of our world and the powers within you. I am Headmaster Muhlaton and will be your guide through this journey. Since our group has grown to twelve, we may proceed. Please be seated.”

As he says this, twelve chairs each of a different color with smiling faces on the backs, waddle (with flexible legs) onto the platform. As we each sit on a uniquely colored living chair, the chairs separate from the group and float on individual circular platforms; we jettison as an assembly into a swirling multi-colored pillar of light.

Soon we find ourselves descending and then hovering above a half circle stage while the Headmaster glides to the front of the stage with eight vaporous dynamos around him. “Welcome to the first stage of your journey—our introductory ceremony. After I introduce each Grotto’s instructor you may follow him or her to their classroom. On my left is Mr. Henderson. He will be in charge of Grotto 101. With him you will learn about the evolution of the human world in preparation for the subsequent magical studies”.

The Headmaster introduces Mr. Henderson--but, there is no Mr. Henderson—only a ball of light. Then sure enough the ball forms into a large black skinned man, a bit large at the round with a broad smile and a mysterious twinkle in his eye; yet, his entire figure seems to fade in and out like a hologram trying to solidify. Finally after his image was well entrained in our brains, Mr. Henderson vanishes into the mist.

As we re-focus our eyes on Master Muhlaton, he says, “To my right, I present Sister Sulis. This year she will teach Grotto 102 in place of Samantha who is teaching abroad in Lithuania at our sister school.”

Unexpectedly, a green puddle appears next to Muhlaton. As we watch, it expands
upward, like melting in reverse, to form a shape of a green woman with a green head, atop of which strands of bright red hair squirm down to her waist like a hundred snakes. The little mole on her nose, though, seemed to be a bit out of sorts.

“Sister Sulis comes to us from a long line of noble Celtic Queens. She will clear up the matter of witches and wizards to everyone’s satisfaction I am sure.” As she eyed us, we could feel the shudders pass through the group. She abruptly returns to her puddle state.

As the Headmaster nods to his left, all we can see is a giant silver egg, about 5 feet high. A large crack grows on the egg from top to bottom and out steps a most interesting creature and the Headmaster announces: “From the ‘land of healthy beings’ I hereby present Mademoiselle Docteur Robyn Oiseau, teacher of the magical human body in Grotto 103.”
Robyn Oiseau is the most beautiful creature we had ever seen, her angel face radiant with a bright green light, her eyes flashing like green emeralds, and a pair of luminous snow white wings on her delicate shoulders. The epitome of health, she exits from her shell (actually some kind of spaceship) wearing a white fluffy robe of feathers that intertwines with her wings.

Finally when the Headmaster could break his stare, he declares: “Doctor Oiseau flew in from the 5th dimension world to share with you the known secrets of the human vessel--your bodies. I trust you will give her your full attention since her wisdom is infused in all successful wizards.” Dr. Oiseau flaps her wings and flies into the tapestry of the sky and disappears from sight.

The Headmaster continues: “Our fourth instructor is Professor Gustaf von Lichtenstein. In Grotto 104, the Magic of the Universe, he will take you on a journey of the universe few have seen, of dimensions and possibilities at the edge of human awareness.”

As we watch the Headmaster speak, to our right we see the wall of air open as if there were a zipper and, with a loud crack of electricity, emerges the grand Professor Gustaf, in appearance a combination of Einstein, Hawkins, and Sagan all wrapped as one. He has a serene youthful face emblazed with a full silvery well-trimmed illustrious beard and a full head of matching silver hair. He bows with reverence with his fists folded toward his chest, much like a martial arts sensei would. He then steps aside of the Headmaster who continues: “Yes there is magic in the real world. But, YOU do not live in the real world; you live in a limited world constrained by time and space which is projected from the real world much like a two dimensional photograph is taken in a three dimensional world.”

“Together we will show you how magic appears in this world, often as science, often as not, as well as some of the magic techniques that are known only by few, handed down from secret societies, private witches and wizards, indigenous cultures, and the pagan worlds.”

“The true wizard is the human who understands his/her world in its many manifestations and wields control of his/her own life.”

“For Grotto 105, I will be your Professor as I explain to you the techniques of magic. We will then culminate our work and practice magic together in the Illuminato Session.”
In a flash, the Headmaster Muhlaton and Professor Gustaf vanish along with the stage and we find ourselves suddenly in Grotto 101.

Open the door to the School of Wizardry for an enchanting experience as you journey through the Grottos with magical instructors. You will travel through history with a shape-shifter, experience a Wiccan ceremony, discover a new astrology with a modern witch, explore the human body with a doctor who appears as a bird, and delve into the science of quantum thought with an eccentric professor. Learn how to perform magic with the headmaster, based on the knowledge acquired in the Grottos, and experience a personal revelation in the final ceremony. Then open the Crypt to explore other possibilities.

Escape the trap of limited thinking. Learn the secrets of wizards and how to think out of the box to become more than you can be!

Mario Garnet has been a student of Rosicrucian mysticism since age seventeen and completed Jean Houston’s Mystery School in 1994. He has degrees in aeronautical engineering and business administration and has worked in the commercial world, the government/military establishment, and the medical arena as a design engineer, computer programmer, hypnotherapist, hospital administrator, and accounting software consultant. Mario was raised in a military family and has traveled extensively in the United States, Japan, and Germany. During his career, traveled on business to Korea, Egypt, Saudi Arabia, India, Thailand, and Europe.