The Holy War Against Homosexuals 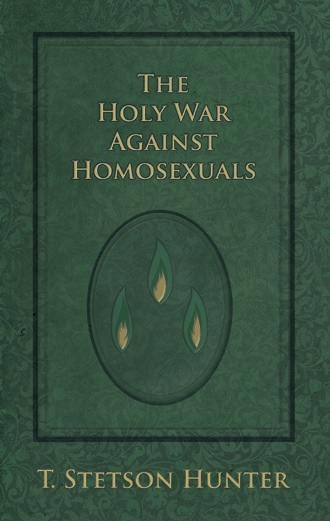 This is natural, this is very unnatural, doing this will get you into heaven, but doing this will drive you straight to hell…..
And as the continuing Holy War against Homosexuals heats up another notch, I read a news flash sent by Christopher Curtis of Planet Out Network, he writes:
“The president of the U.S. Conference of Catholic Bishops wants all Roman Catholics to oppose marriage between same-sex couples by supporting a federal constitutional amendment that would ban it. “Today there is a growing sense shared by many people, including a wide range of religious leaders, that a marriage protection amendment is the only federal-level action that ultimately will protect and preserve the institution of marriage,” Bishop William Skylstad wrote in a letter dated March 27th and made public Monday.
Skystad wrote that he expected the Protection of Marriage Amendment to be introduced in the Senate in June. “In a matter of months we will have the opportunity once again to stand in support of marriage as the God-given union of a man and a woman,” he wrote. “I am aware that the time is short for taking action, so I urge you to do whatever you can, given the situation and resources available to you,” Skystad wrote, noting that the Knights of Columbus have initiated a national postcard campaign to support anti-gay legislation.
“I am also aware that in some states there are upcoming votes for either legislation or constitutional amendments defining marriage,” Skystad added, “We are challenged, therefore, to give attention to the interplay of state-and federal-level policy as well as to focus our efforts where they are most needed and can do the most good.”
Jeremy Learning, spokesman for Americans United for the Separation of Church and State, took issue with Skylstad’s proposal.
“I think this confirms what our organization has been arguing for a long time – that the religious majority in America wants the federal marriage amendment to enshrine their idea of marriage in the Constitution and have it imposed on everyone else, and other religions are rendered second class in essence,” Learning said.
“We have a constitution that mandates a separation of church and state, and we have these people trying to enshrine their religious views in that very document” he said.
Finally after reading all of this I shake my head and think, “That’s all very condemning!”
And my general confusion over condemnation is multiplied ten-fold while I wonder in Jesus’ eyes who will really be condemned – gays for wanting a bond of love? Or, in Jesus’ eyes will the Catholic Church one day be condemned for publically condemning homosexual love? I have comfort Jesus knows what’s up with our Catholic Caesar and that’s for sure.
So all this I battle with as I’m again reminded of the words found in Jesus’ prayer, “Father, forgive us as we forgive those”…. who now just want to get married? Or, dear God, do we also need to forgive those who just want to abolish us from “the right” to get “legally” married? And as I fight with the knowledge that selfish Christians CAN stop homosexuals from getting “legally married” – in truth they CAN’T stop God Himself from honoring our love; while, within me, the Holy Spirit’s answer to all of this worldly fighting is simply, “Just forgive – it doesn’t matter which side you have to forgive – in the Spirit of love, just forgive, God knows even if it’s only for your own soul’s sake – try to forgive!”

Whether you are very pro-gay or strongly anti-gay this book runs the gambit from tender and forgiving to brutally honest and hard-hitting. This book is designed to be totally THOUGHT PROVOKING and is a must read for all sides of the debate while giving all sides something to seriously consider in re-evaluating the views of who will be saved and why. The author's ultimate goal is that the world, after reading cover to cover, will walk away with the understanding that this book was "born" to be only Anti-Satan's hate while being extremely Pro-Christ's love.

A cowboy in spirit, Tim Stetson Hunter grew up mainly in Texas. After teaching Country Western dance for 20 years in Dallas, jumping from the frying pan into the fire, he moved to Oklahoma City in June of 2,000. He credits Oklahoma for sparking his eventual healing from suicidal ideation.