A Stroke Was My Teacher 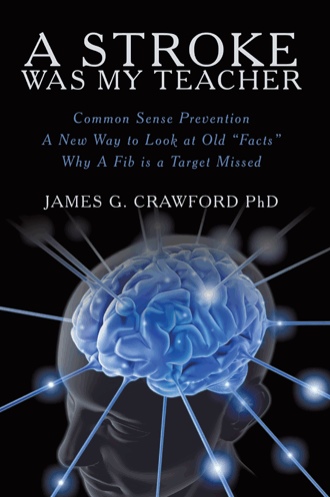 Following dehydration, the next major step in the proposed mechanism for stroke (S) and heart attack (HA), is the sticky-cell stage or phase.
Sticky cells are pictured as the necessary preconditioning step for red cells and platelets that enable them to clot readily. This is a more formalized idea of why clots form during the course of S and HA development, which does not rely on atrial fibrillation to provide a likely mechanism. Naturally, formation of clot serves as the final villain for S and HA etiology.
Backing up for a moment, shown on the left side of the schematic are eight potential co-factors that can couple with dehydration to produce sticky cells.
Here is the big Kahuna that welds this schematic into a coherent pattern: each of the eight co-factors shown on the left side of the schematic, from fibrinogen through magnesium deficiency, is by itself capable of inducing or promoting atrial fibrillation.
The vehicle that ties them together is inflammation. AF seems to get a lot of credit for S and HA; it should be clear according to this proposed flow chart that actually AF per se is only a matter of guilt by association. Beneath AF is an entire complex of inflammatory agents which alone or in concert are at the true roots of HA and S.
You will notice too, the prominent role of insulin resistance and subsequent diabetes that are shown as a means by which the sticky-cell stage can be bypassed. Since diabetes and its associated metabolic syndrome components are capable of inducing clot formation directly, I think it is fair to speculate that the one thing AF does bring to the table is to provide a theoretical mechanical means to reduce clot size to a range that can block small vessels, allowing them to migrate either to the heart for HA or to the brain for S.
According to the University of Maryland Heart Center, AF is associated with stroke risk at a rate of 5 percent and is responsible for 70,000 to 100,000 strokes a year. According to CDC, 2.6 million will have AF in 2010, with AF responsible for 15 to 20 percent of strokes, which conflicts with the Maryland data. Five percent of 2.6 million previously quoted would amount to 130,000 strokes, so those numbers are in range. Saying this in another way, as I interpret the data, 95 percent of subjects with AF have no increased stroke risk, so AF per se is not the target.
They go on to note that the Warfarin blood thinner reduces stroke by 60 to 70 percent but does not eliminate risk as I can testify.
When we speak of our bodies as being dehydrated, we simply mean that our bodies are producing more fluid as waste than we are drinking—not a safe arrangement. Fibrinogen does not itself cause or prevent a stroke but can help cause the conditions where a stroke or heart attack can occur. Fibrinogen is a crucial chemical called a proenzyme in our blood that helps stop bleeding after injury—but too much can be harmful, causing clots to form when we do not need them. In fact, you could think of magnesium deficiency, chlamydia, influenza, and mycoplasma infections as well as sickle cell and rheumatoid arthritis diseases as having the common behavior, in that they do not themselves cause stroke or heart attack but increase risk by providing the conditions for clots to form that lead to stroke and heart attack. Diabetes seems to be the exception by directly causing clot formation, creating an even higher risk of stroke.
Diabetes is an epidemic disease in which, because of the lack of a particular hormone, sugar can accumulate in the blood, instead of being changed into energy or fat. High sugar in our blood can cause blood to clot. The clots apparently can be broken up into smaller clots by a rapidly beating heart (atrial fibrillation). The small clots then can travel into tiny blood vessels in the brain or heart muscles, clogging them such that neither oxygen nor food can reach the cells, causing them to die, which is then is termed a stroke or heart attack.
The reason for this discussion is to offer a possible mechanism for clot formation in AF events that does not rely solely on an erratic heartbeat and thus may offer a possible explanation why not all AF events lead to heart attack or stroke. Doctors and patients need to understand this difference so that they can make appropriate changes in their health habits to help avoid these two diseases. From this discussion, it should be evident that the most important changes we can make are to drink much more water and to be sure we have good nutrition that includes a rich magnesium supply. The current recommended amount is eight glasses of water per day. It is highly unlikely that clots are caused by a deficiency of a prescription drug such as Plavix or the like.

The book begins by revealing new ideas about how and why embolic stroke and heart attacks share a common history involving clot formation. The only distinction between the two diseases is where the clot finally stops. If in the brain, it results in a stroke; if in the heart muscle, a heart attack. Thus the first portion of the book (Chapters 1-4) documents how the mechanism of clot formation was studied through the eyes of a lifelong research scientist who was not a stroke expert, but a stroke survivor. Described in those chapters are entirely new ideas about how and why clots form, and how to prevent them. While my four years of stroke investigation (so far) was unfolding, I simultaneously carefully recorded my daily observations as I experienced an embolic shower-type of stroke. My goal was to assemble a guide for all stroke victims alerting them what to expect, and also my evaluation of a number of treatment modalities, nutrients/supplements etc., designed to save money and frustration to newcomers to the stroke world as well as the initiated. The big difference between this and other accounts of embolic stroke is that in this case it is framed in the context of an aging body. If you do not already know, this distinction is important since there is a fine line between the effects of aging and the effects of stroke. The upshot of this book is to offer my evidence to the reader that stroke and heart attack are largely avoidable diseases. My thought is, if the reader thinks what I say makes sense, they can take the recommended action starting today to minimize their risk. And it is so incredibly simple and virtually cost-free.

The account of how “A Stroke was my Teacher” evolved, was written from the perspective of a life long scientist who experienced an embolic stroke after retiring from a career affiliated with NIH and Pfizer Pharmaceutical Company. The author is a product of mid-western culture with conservative values. Now living in Brevard, North Carolina, He is dedicated to the education of stroke and heart attack candidates, and victims. Contact: estroke911@gmail.com