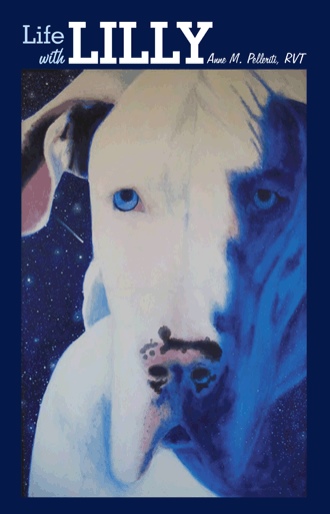 I have bouts where I think I wouldn't need to do half the cleaning I do if it wasn't for Lilly. Usually when I get home, the entire contents of the bed are either balled up into a tight knot or not on the bed at all. I guess all those years my mother yelled at me for not making the bed didn't really matter after all. I have tried various methods to stop her from getting on the bed all together. I really had no intention of letting Lilly sleep with us. It wasn't until she had to wear her attractive E-collar and my husband John was on a long business trip that I made that fateful decision. After all, she'd been through so much with the tail incident. She was still a puppy - seventy-five pounds, but still a puppy. Besides, it was just going to be a temporary arrangement, until John came home. It might not have been so bad with just one Great Dane in bed with us. But once we brought home Sorella a few weeks later, John felt it wasn't fair to let one sleep on the king-size waterbed and not the other. So it's not all my fault. Anyway, it got to be too much for us with crushed legs and being wedged against the wooden frame like a sardine. We finally decided to try and keep the dogs off the bed. At first we just closed the bedroom door. Refinishing that door was a miserable job. We tried keeping them in the downstairs kennel. It's not like it was a small space for them. We had to remove our kitchen table to accommodate the behemoth. I'm sure the neighbors loved being serenaded all night. Finally, I was sure my next plan would work. I broke down the kitchen kennel and leaned the various components around our bed. I put the hinged parts up by the head of the bed so John and I could get in and out. The sides were tall enough so they couldn't jump over it. Brilliant! This had to work. At first the dogs were stumped. They paced around the bed, frantic and confused, while my husband and I giggled like children at them. We were giddy at the prospect of outsmarting the dogs, until the pacing of two hundred pounds of dog went on for over an hour. Finally, they retreated to the living room downstairs. Ah, peace at last. We were nearly asleep when the barking started. "They'll stop," we reassured each other. They did stop. Then they started and stopped, and started and stopped, every thirty minutes all night long. By morning, we felt like caged, tortured prisoners. "it's okay," I told my husband. "Just a day or two and they'll adjust." I can't repeat his response. My mother would faint. So the next night as we crawled into bed exhausted, the dogs tried to rush our gates. Luckily, they aren't coordinated, and I only smashed one lag trying to outmaneuver them. The good news was that the pacing didn't last quite as long. The bad news was it gave them more time to bark downstairs. At one point I went downstairs to confront them, since the "ignore them" theory was going so well. There they were, sitting side by side on the couch, no less, barking at the ceiling. Sorella saw me first and shot off the couch through the dining room. Lilly was obviously enjoying herself until she realized I was inches from her giant face. I believe she stopped in mid-howl, and if she could have spoken would have said, "Oh shit." It was quiet for all of forty-five minutes upon my return upstairs. That's after the allotted pacing time. After another "restful" night's sleep, we thought we'd try staying caged one more night. After all, how long could they hold out? One of the things we neglected to factor in was that while we were at work, they were home sleeping, resting up to torture us. It was a major flaw in our strategy. I tried phoning the house several times and yelling Sorella's name over the recorder. Since Lilly's deaf, Sorella was the only one I could torment. I quit when my coworkers started to stare at me. The tird night didn't go well. We didn't make it past midnight. I couldn't really understand what my husband was mumbling as he tore away part of our cage. The dogs were just happy that we weren't hoarding the cage all to ourselves anymore.

Sometimes events and people change your life. Our lives were changed when we brought Lilly into ours. At 130 pounds she wasn’t big for a Great Dane but her impact was. This book is our story of how our lives were affected, sometimes for better, sometimes not. It was always challenging, rewarding and interesting. They say life is the journey, Lilly made our journey enlightening, frustrating, fun and challenging. This book is a window into the life of our ride with Lilly, full of bumps, turns and great love.

Anne's volunteer work with a wildlife rehabilitation center and her own dogs battle with cancer lead her to pursue a career as a Veterinary Technician. Since 1995 she has been a practicing RVT with a small animal practice. She is also an accomplished artist and a Great Dane fan.