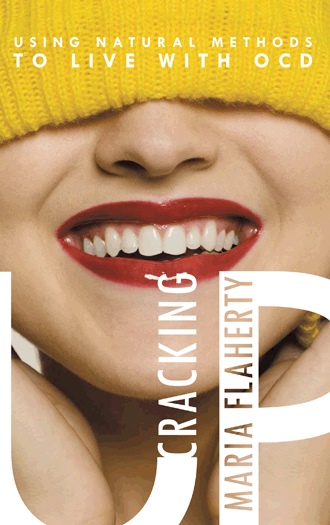 Chapter One ~ What Is OCD?

Obsessive Compulsive Disorder (OCD) is a type of anxiety/mental disorder. Those who have OCD typically suffer from intrusive thoughts, which are often disturbing and uncontrollable. These thoughts, or obsessions, in turn produce anxiety which is usually relieved, although momentarily, by repetitive behaviors or rituals, which one also refers to as compulsions. Because the relief of the obsessions by the compulsions is momentary, the person with OCD ends up going through cycles. These cycles can last for minutes or even up to hours at a time. Some who suffer from OCD know that this can take up a lot of their time and eventually their normal everyday lives can suffer because of this.
So for those who don’t know how OCD feels, here’s an example: I may say that I obsess and worry, and that fear runs rampant, but what is it like? Well, for me, and probably like many other individuals with OCD, it’s basically a panic attack. You lose your breath, your heartbeat quickens and skips, your stomach is tied up in knots, and you just feel intensely stressed. Everyone goes through this once in a while, but when you have OCD, it’s more than once in a while. It’s more like fifty times a day (at least it was for me). So just for that alone, avoidance of certain things that triggered the anxiety was usually preferred. But that’s how so many people who live with OCD become introverts - we’re always hiding.
It’s amazing how not very many people know what OCD is. However, one in 50 adults has OCD, and it is the fourth most common mental disorder in the United States www.news-medical. The numbers according to WebMD is that “OCD afflicts about 3.3 million adults and about 1 million children and adolescents in the U.S. The disorder usually first appears in childhood, adolescence, or early adulthood. It occurs about equally in men and women and affects people of all races and socioeconomic backgrounds”.
People who have OCD may experience one or more symptoms. Some obsessions could include fear of dirt or germs, fear of causing harm to another person, fear of evil or “bad” thoughts, the need for order or symmetry, the need for cleanliness, fear of numbers or colors, preoccupation with religious matters, or persistent sexual thoughts. The list goes on and on, but these tend to be the most common obsessions.
Common compulsions include repetitive hand washing or bathing, checking things such as locks or switches over and over again, not touching “contaminated” objects such as door knobs or bathroom faucets, making sure items are in a specific order, counting while performing everyday tasks or even just counting steps as they walk, performing tasks a certain number of times, repeating prayers or words that help get rid of the “bad” thoughts, and extensive collecting (hoarding) of items. Again, these are the most common and there are other compulsions out there.
These symptoms can cause severe distress on a person and can take up a lot of time. Eventually, it can even become alienating to the individual who suffers from them. A lot of people may consider the OCD sufferer as psychotic or paranoid, but that often leads to the conclusion that they don’t know what’s going on. OCD sufferers know exactly what’s going on, they’re not clueless. This “knowing” is what causes such anxiety and distress in their lives, because they know something is wrong. In fact, many who have OCD learn to hide it very well. You probably know someone who has it, and hides it.
There are biological factors and environmental factors that cause OCD. Research has discovered that a neurotransmitter, serotonin, is usually low in the brains of OCD sufferers (WebMD). This imbalance is thought be hereditary, so the chances of a person with OCD having a family member with OCD is significant. So serotonin and hereditary tendencies are biological factors. Environmental factors can include stressful situations in a person’s life that can trigger OCD. This “trigger” is generally only in people who already have a biological tendency for developing OCD, or for those who already have this disorder. The environmental factors can include illness, major change in your life such as relationship issues or pregnancy or divorce, abuse, death of a loved one, anxiety attacks, or any other number of seriously stressful situations. Also, women who already have OCD may find that their symptoms increase during their pregnancy and postpartum, as it did for me.
OCD is not preventable and is considered a chronic disease. However, with proper treatment, an individual who has OCD can live a fairly normal life.

PART TWO A Better Way to Live With OCD
In this section of the book, I will get to all the goodies that I’ve discovered while on my twelve-year long journey with OCD. Each chapter will be about one method that I used to lessen the ugliness of this disorder. I don’t know if I will ever be fully healed, although I’m starting to think it’s quite possible. Each of these methods worked for me. Hopefully they will work for you as well. Who knows, while on your journey, you might stumble across something else that works better for you. One good thing to remember is to always smile and laugh because laughter is the best medicine. It’s good to crack up with the giggles once in a while. Whatever happens, this book is meant to help broaden your mind about OCD and how people can live better with it. May you have many blessings on your journey.

Chapter One ~ Your Guardian Angels
Finding my guardian angels was the one singular thing that got me started on my journey to self-healing. So I think it’s important to tell you about that first. I was going through a really tough time in my life when I was in my early thirties. We had become broke, I experienced a miscarriage, we moved, and because of all of this stress my husband became an alcoholic. All of this happened within a 6-month period. A very stressful woman is what I became out of all of this. My son, who at the time was 7 years old, experienced a lot of stress of his own. He started doing badly in school as a result. Also, he seemed to lose control of his temper very easily. Our horrible stress was causing his stress, which caused more stress for us, and so on and so on. If left unchecked, it’s very easy for stressful situations to spiral out of control. That’s true for anyone, but especially for those who have OCD or for those who live with someone who has OCD.

Cracking Up will provide the OCD sufferer with alternative methods of living with this disorder. Discover a way to have and enjoy a fulfilling life without all the suffering and hardships of OCD. In addition to using meditation to help connect with your angels and with God, you will also learn how to use Reiki, color therapy, chakra cleansing, diet and exercise, and even past life regression to figure out what best works for you. Each chapter describes personal experiences of author Maria Flaherty, as well as plenty of information to help you along your own journey of self-healing. It also reminds us that a little laughter and gratitude can go a long way. This lovingly written book will be a handy guide for those who want a different way to live with OCD.

Maria Flaherty is a wife and mother of two who has spent the last twelve years of her life on a journey of self-discovery. Living with OCD, Maria has found which alternative methods work and which don’t, and now shares her collective knowledge in this book.