It's a Metaphysical World 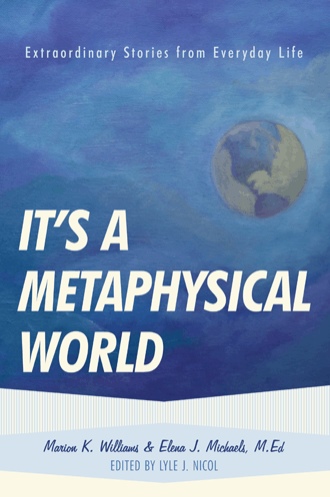 The Bridge
Insight:
Trust your dreams.

It’s a Metaphysical World is a collection of over one hundred extraordinary short stories drawn from everyday life. Although names, locations, and incidental details have been changed, the salient facts are true. Each story deals with some aspect of metaphysical phenomena such as intuition, synchronicity, astral travel, bilocation, time warps, past lives, cell and soul memories, healings, hauntings, miracles, and sightings. Psychic sightings include everything from angels to ghosts. The strangeness of the stories led authors Marion K. Williams and Elena J. Michaels on a fascinating journey of discovery trying to understand the world they thought they knew. All stories offer insights, and many challenge conventional scientific and religious beliefs.

Marion K. Williams is a wife, mother and grandmother, as well as a student of art and philosophy. She is a certified practitioner of various healing arts and has a passion for travel. Her stories come from around the globe. Elena J. Michaels, MEd, is a single mother of two grown children; she has had a lifelong career in addressing mental health and addictions. Elena’s spiritual quest was shaped by her European family and various events in her life. Marion and Elena share a keen interest in psychic phenomena and the unexplained.