Book 2 in the Slender Threads Series 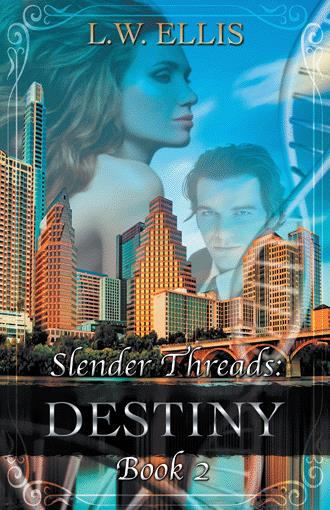 A scant week on the job, Sara Thompson Layton found herself again navigating the maze of offices that occupied the upper two floors of the Joskes’ Department Store building in downtown Austin, Texas. Juggling a large rolled map, Sara scanned the numbers above the doors lining the unfamiliar hallway. It was quite possible she could work here for years and never meet all the employees of Joskes’, but this morning her instructions were to deposit the map and a folder on the desk of Robert Rollins.

A quick perusal of the organization chart identified him as the company’s Assistant Director of Regional Sales. “Ah-ha,” she muttered. She had, in fact, turned in the right direction when she’d gotten off the elevator. Her success was punctuated by a low grumble heralding yet another thunderous clap that shook the walls of the six-story office building.

The door was open, but the room was cloaked in thin early morning light, dulled even further by the angry dark clouds hugging the rain battered windows spanning one entire wall. A large wooden desk accompanied by a high-backed leather chair sat empty at one end. The name plate on the door confirmed she was indeed in the correct office. Obviously, he hadn’t come in yet this morning, probably rain delayed.

She stepped into the spacious office, walked to the desk, and carefully deposited the items on its neatly organized surface. As she turned to leave, she glanced around the well-appointed office. A rich, burgundy leather seating-group flanked a large, oval conference table at the opposite end of the room. Next to the grouping, a thirsty forest of plants hugged the rain battered floor-to-ceiling windows. A small intake of breath caught in her throat when a brilliant flash of lightning illuminated a dark-haired man standing at the edge of the plants, staring at her. He stood motionless, framed against the hazy backdrop of the stormy sky—like a sepia print from a bygone era.

Phantom images that made no sense fluttered through her mind, sending faint waves of recognition rippling down her spine. Sensations flooded her—so foreign and yet so familiar. She’d never met this man before, and yet for some inexplicable reason she felt as if she already knew him. She tried to look away, but the connection was compelling. Another thunderous crash broke the link. Her cheeks flushed with heat as she struggled to regain her composure.

“I’m . . . I’m sorry,” she stammered. “I didn’t see you. I thought you hadn’t come in yet.” He continued to stare, probably angry she hadn’t knocked. “I’m Sara. Sara Layton.” She rushed to fill the silence. “The new data coordinator. Stan asked me to bring these up.” She gestured toward his desk. Suddenly he smiled and walked toward her. “Sorry. I didn’t hear you come in.” As he drew closer she realized this man looked absolutely nothing like the Robert Rollins she’d pictured. After meeting his boss, Del Grishom, she’d somehow envisioned his assistant as a stodgy, humorless man whose only passion was paper pushing.

The real Robert Rollins was quite a contrast. He was considerably taller than he had first appeared, a little over six feet, she guessed, and strikingly handsome. It was his eyes, however, that caught one completely unaware. Even in the dimly lit room, they were the most startling shade of blue-green she’d ever seen. “Robert Rollins,” he said, stopping in front of her and extending his hand. She stared at his outstretched hand for a moment before finally grasping it. “Quite a show from up here.” He glanced toward the window as he held onto her hand for a heartbeat longer than needed. She nodded, but words escaped her. Suddenly, she was extremely unsettled. “Thanks for the map,” he said as their eyes locked. Flustered, it was a few seconds before she found her business voice. “You’re welcome,” she muttered as she turned abruptly and headed for the door. The moment she stepped into the hallway, her hands began to shake, and the most unnerving sensations bubbled up inside her. What in the world just happened? 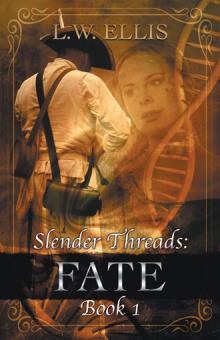 Sara Thompson Layton, professor of History, is a woman grounded in the present, yet fascinated by the past and its intricate weavings and subsequent outcomes. She’s a strong, resilient woman who has spent most of her thirty-eight years sheathing her emotions in a protective shell of reason and logic. The only man who has ever been able to breech that wall is Robert Rollins, a man with his own protective shell. The intense emotional bond they shared was unlike any either of these two guarded spirits had ever experienced, but the turmoil and uncertainty in their lives was too much for their fragile relationship to bear.

When Rob re-enters Sara’s life seven years later, she is reluctant to risk her heart again and is locked in an emotional struggle until the day she purchases the century-old memoir of early Texas pioneer John Rollins. What Sara discovers within this weathered book unexpectedly opens a window to her own past and a 150 year old bond that shakes the foundation of her logical world, forcing her to reexamine what she believed to be a long-dead relationship.

Accepting the improbable, Sara finds the courage to let go and listen with her heart.

Fate may have brought Sara and Rob together, but only they can choose their destiny.