A Story of Forgiveness through Gratitude 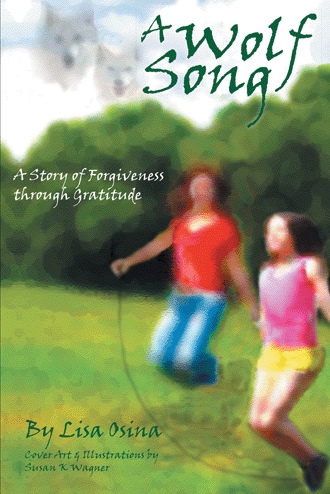 The wolves were transported telepathically to a ceremony of a pool of spirits and potential earth bodies. They were named here by their own animal spirits. Nano would be the male and Nala the female. So empty they were, so easy it was for them to choose. The spirit wolves walked instinctively toward their suited bodies, which appeared as pregnant mothers with translucent bellies about to give birth. Nano chose a wealthy family, and Nala chose a poor one. What would happen to these two spirit wolves as they surrendered to the unknown earth bodies? Would they fully merge? They had chosen two girls, who would become women, who would experience the extremes of life. Yes, they would need sturdy bodies to endure the life ahead. But after birth, once they had entered the physical, it would all be up to them, the two girls. Nano and Nala stood as close as can be and nuzzled each other’s ears, for soon they would separate. They heard a deep, penetrating tone; a chorus of voices engulfed them. The vibration of this sound surged through their spirit bodies and sent them through the ether into the form of the physical.

A Wolf Song is a healing story about a multidimensional, dual-life journey of tragedy, gratitude and forgiveness. Its key characters—Hanna and Margaret; their “spirit” wolves, Nano and Nala; family members; and teacher Trudy Goodenough—meet every ten years under Trudy’s guidance and the wolves’ whims. The story begins at childbirth; the girls meet nearing their tenth birthday and discover their wolf spirits under a jump rope. Each chapter contains a verse which reveals the lessons of each chapter. Ordered to meet every ten years by the wolves, Hanna and Margaret meet at twenty in Wales and in New York City at thirty. Nano and Nala are not necessarily balanced. Their karmic rites spill over into the young women’s lives. One of the wolf spirits wreaks havoc at a public event, and a battle between light and darkness ensues. “Lisa Osina’s book brings you into an enduring balance between the physical world and the world of spirit.” Lynn Andrews, shaman and author of Medicine Woman and 27 other spiritual and self-empowerment books.

Lisa Osina was born in New York State and immigrated in 1971 with her family to Israel, where they settled on a kibbutz. Professionally, Lisa’s thirty-five-year career in theatre administration, publicity, and accounting has supported her lifestyle and writing. She is an ordained minister and graduate of Lynn Andrews Center for Sacred Art and Training. A Wolf Song is a reflection of the journeys and lessons she learned and continues to study. She is also the author of Moving, one in a quartet of autobiographical novels first published in 2000 as one of the first e-books published by the Internet Book Company.