The Dao of Doug: The Art of Driving a Bus OR Finding Zen in San Francisco Transit: A Bus Driver’s Perspective 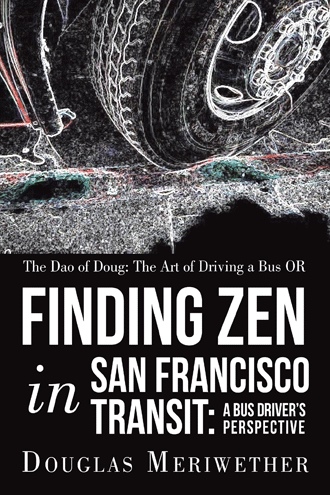 Preface by the Author

This book was meant to be read in short doses, such as a chapter a day, like in a meditation book. This explains why some common points come up in more than one chapter, and repeat. This was intentional. These chapters are more like a weekly blog on a social media website, and were posted as such to be like a topic of the day. So who is this book meant for? If I learned anything from my grade school speech teacher, or my university creative writing professor, one of the first ups is: Who is your audience? I would say I have several groups of people in mind for this book. First, students in the training division who have recently applied for a job as a transit operator. Second, those considering a job for the city. And third, passengers who have wondered what we go through, or how do we handle doing such a job.

Then there are the tourists visiting our city that might want reading material on the flight to SFO, or perhaps my friends who grew up with me and wonder just what the heck my life is like here in San Francisco. And then the other more passive audience are those that still own cars, or drive most places to get around. It is my hope that if I can get one more car off of the street because of this book, then I can feel like I am doing some good in getting this word out.

I enjoy the fact that I don’t have a car. But I sure would love a Tesla. Or the new Ford Focus that gets 40 miles per. But just because I am happy that our cars are becoming more efficient, it doesn’t mean I am going to lease or own one. The last group I have written this book for is for those who have cars and haven’t considered taking mass transit. I get people on my bus who have cars in the shop that try transit for the first time. And taking my car to the shop was just another straw that broke my camel’s back in convincing me that there had to be a better way to life. And that is what I have found here in this dense city. True, the cost of rent is high, but so are wages. And by dumping the car, I found a higher standard of living than the supposed convenience of the suburbs and drive thru culture. A meal at an Olive Garden may be cheap compared to Squat and Gobble here in the city, but at what cost does that Olive Garden meal imply?

I don’t trust our representatives to make the changes in transport we so desperately need because they are driving around looking for parking also. Most of my coworkers drive cars and they don’t want to pay for parking either. But the notion that parking should be free is killing this city and other cities on the West Coast. The traffic on I-5 from San Diego to Seattle is just awful. I don’t know when the tipping point will be reached, but it is coming. And I hope this book helps.

I don’t have a car so I don’t pay for parking. I don’t pay for gas, new car battery, jumper cables, car insurance, deductibles, oil, brakes, or checkups. I have two bikes and the repair bill rarely goes over 150 dollars. For 150 dollars I get all new brakes and cables. And these last for over two years. I just don’t see that in owning or caring for a car. I walk or ride to work, and my bus is all electric. The electricity comes from hydroelectric power, so no carbon emissions result. This is clean living. I am trying to breath deep and appreciate the fresh air after a rain storm. Hopefully, this book too, is that breath of fresh air. Thanks for riding!

I come from a background where money may not be the root of all evil, and it was acknowledged that it did indeed grow on trees, but that they were two types of money: Good money and bad money. You never wanted to throw good money after bad. And there was a nuance between money earned and money given. Or money found by luck, or money made easy. I never heard too much about money made easy. Honest money made was the best money. A penny saved was a penny earned. But, boy did that sound like a lot of plodding and not too much fun. So it should come as no surprise that if I worked hard to make money, it should therefore be good money, and so I was pleased to find that work as a transit operator in the city by the bay, the Bagdad by the bay, the city that never sleeps, was a hard job but a good paying job. I hit the ancestral family jackpot. I was making good money at a hard job that was in line with my roots.

But I noticed early on in my bus riding days, that some drivers looked relatively relaxed. And that nothing seemed to phase them. And that some were actually fun to talk to. And that there did seem to be a way in which to make their work look easy and relaxing, and yet is a high paying job. So the seed was planted early on that this might be a good job for me. As a Gemini sun sign, transportation and continual movement fits my sign. And my 4th grade art project, “What do I want to do when I grow up?”, was a picture of the silver GM coaches that serviced the NY Port Authority from Jersey during the 60’s. I had bus driver as a job I wanted to do since the fourth grade. And I have heard that those that are successful in their jobs later in life, had a passion for those activities or skills from an early age.

But unlike Civil Engineer, Medical Doctor, Dentist, or Lawyer, Bus Driver did not seem to appear on the success roster. But I didn’t really care. Ralph Kramden was my hero. I saw that no matter how half baked an idea was that I could hatch, as long as I had my friends, and made a connection with others, everything would turn out okay. When Jackie Gleason would exclaim, “How Sweet it Is!” I got it. I guess you could say the in a way, “The Honeymooners” was my imprint version of “The Wonder Years,” that many followed in their youth in the eighties.

So fast forward to San Francisco and the late nineties. Newly elected Mayor Willie L. Brown Jr., Esq., was mandated to fix muni in his first 100 days, and he took immediate action to hire more bus drivers. I went to the Moscone job fair and put in to get on the list. Finally, at age 39, I was finally making a plan about choosing a job that seemed more like a career or occupation than just a need to get another paycheck fast. I encourage anyone living paycheck to paycheck, or between jobs, to pause a look deep about what kind of service they want to provide to others. I had always sat in the front seat when I rode the bus with Grandma, and liked it when the bus drivers would talk to me. I still do that now, conditions permitting, and I feel like I am actually in a recruitment mode. Early first impressions can and do have a lasting effect on our life decisions later on down the road. Get them when they are young, and so I present myself as doing a fun job. 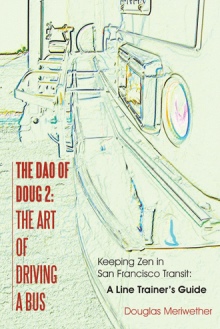 There is much to know about being a bus driver. It takes about thirty-five days to train a new employee. But as Doug points out, some skills come through experience that takes years to develop. This book contains material needed to choose your style on how to pass by the fare box and how to maintain Zen when the bus is full. “The Dao of things cannot be complete without the Dao of driving a bus. I’d ride with Doug all the way to the Himalayas just to listen to the art of his wisdom.” - David Biddle, author of Implosions of America — A Story Collection “Nice read. I like the mix of situational context and life lessons.” - Chad Upham, graduate, Art Center College of Design

Driver Doug has been a transit operator for the San Francisco Municipal Railway since 1998 and takes you to see the Painted Ladies at Alamo Square Park! Doug has developed the precious commodity of driving a bus under stressful conditions appear easy and fun! Choose your style on where to stand and how to pay at the farebox. Step up and step in to find your Zen while riding Muni!