The At-One-Meant IS In Place

The Only Question Is: When Will We Receive It? 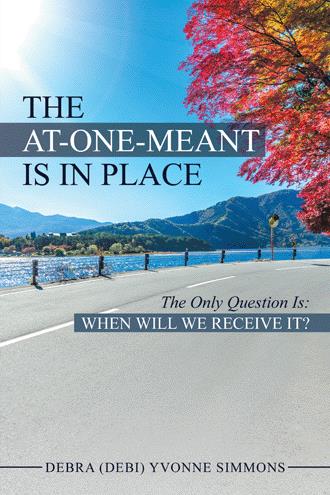 Chapter One Does Anyone Care? I was worried about going. I mean, I had been suicidal for years, and it would be easy to have an accident in the mountains. Would my mind play tricks on me and find a way to end this nonsense? Then there was the coast. The weather where I could survive if I just ran away. It was the stomping grounds of my early years. I had been told I was not wanted here by one adult child, and that I should kill myself and them as well, by another. Angel wings seemed to be all that kept me standing at times like that. My capacity for working “for a living” in the world of illusion was fading away. I just did not see the purpose. I did not want to continue to feed the frenzy of discontent, neglect, and abuse that I saw all around me. Did I have enough fight and faith left in me to share what I had found? Would anybody care? One more time; maybe I would find someone who would give a damn about humanity as a whole. Maybe I would find someone who would want to know what we are really doing here, and our assignment from the Creator of Perfection, to bring His Son into the Light. I would be driving to the west coast for a four-day workshop with one of our charismatic, motivational speakers of the day. Groomed by many greats, he had the energy and ability to make difficult things look so easy. He brought together thinkers who said they longed to move mountains for humanity. Surely, if anyone would listen, they would be there among the bold entrepreneurs! Sadly, besides a lot of average people wanting to make a difference in the world with their magic blogs, like myself; I saw mainly groupies who followed these types of speakers from workshop to workshop enjoying the limelight of being near the famous. There were even those who raised their hands in worshipful praise as if this speaker had come down from Mt. Sinai with the Ten Commandments. Judgments from the stage were obvious and fell like acid rain. I saw a lot of staged showmanship and better-thans. You knew the better-thans, because those where the ones who, could afford the extra packages, that would allow the key personalities to be able to interact with you personally. ****** It had seemed reasonable to cross the mountains at night, so that I would not be overwhelmed and unable to get to my destination. I just happen to have a terrific fear of height, which I discovered a few years ago when visiting Mt. Tipanogus Cave in Utah. “The only access to the cave system is by walking a strenuous 1 1/2-mile-paved trail, which rises 1,092 feet (.033 km) to an elevation of 6,730 feet (2.05 km) above sea level.” It was an adventure for me! I had zigzagged up the mountain, noticing that many passed me and my two companions by, in not small numbers. There was no rail, this was Utah, “we are adventurous and God protects us” was their motto apparently. Unlike Minnesota where I grew up, that says, “we are going to have rails and protect those who do not have common sense.” Well, maybe that was just my interpretation. Nearly every scripture story I knew was recalled, as I hugged the side of the mountain. Tears streaming down my face, at times, as I moved my way upward. It was incredible; the self discovery found on that one and a half mile walk was huge. I thought about it for months afterward. There were young adults with children, who must have been less than four, some looked only two or less! They did not even hold their hand. Much less carry them. And the path only seemed about five or six feet wide in many places, before a sheer drop down the mountainside! Thankfully, it was all paved, so there was no slippy, sliding. And the trail was monitored and cleared for crumblings from the face of the mountain. About sixty feet from the cave’s entrance a tall young man in a ranger’s uniform came up to me, and told me I could put my hand on his shoulder and he would walk me down the mountain. I told him I had come this far and would go the rest of the way “if I had to crawl”. I realized there was no way I would hold his shoulder, because I could not trust myself not to panic, and somehow throw him off the edge. I knew, I would not put him in that dangerous position. The treck showed me that I walk solo. Like the folk dance class at BYU, as an nontraditional student at age 50, had taught me; I am not a “team player”. The Holy Spirit bore witness of this to me as I tried to get my feet to cooperate with the steps of the others. This puts me on the outside of things, but I do not mind that. I was used to traveling on my own in life. Looking back I feel sorry for the women who traveled with me. I was in a world of my own; me and the Holy Spirit, i.e. my inner teacher and guide. Imagine the lives of my children, as I would struggle to fit into any socially acceptable situation. Maybe that is part of why I felt instructed to be a part of such a structured church while I raised them. I thought that would give them a map to use in life. No, let’s face it. It was for purely selfish reasons, I had been told by Spirit I would learn things Jesus wanted me to understand there. And that I did! I was a natural outlier! I really thought I could get these people’s attention! I would take on the world, and turn it upside down!

Debra gave us the fictional “Mama’s Christmas Carol, You Got the Power, Mom!”, published by Balboa Press in 2019. Here, the teachings of Jesus helped Dee relinquish the “ghost of her fears and traumas”, through a witness that this life is not “her” story. Debra’s new book, “The At One-Meant IS In Place, The Only Question Is: When Will We Receive It?”, gives a reflective look at just how confusing life can be; along with another way to look at it. Even as she looks “with eyes wide open” at what she sees around her, she finds a place of peace and joy, through eyes of the Atonement. As a little girl, Debra knew Jesus to be her friend, and remembers being given the choice to see the love, or be angry. Her one constant friend, she knew as Jesus. Stumbling along in life, Jesus encouraged her as she developed the ability to hear, and follow, a guiding light within her. Today, she recognizes this as the Holy Spirit. Knowing that God believes in us, Debra insists that the fictional characters in her story, however real they may seem at any given time, are only there to teach her about who she is as a part of the Christ. Egotism is not her goal, nor is bashing; hope and abundance for ALL, is.