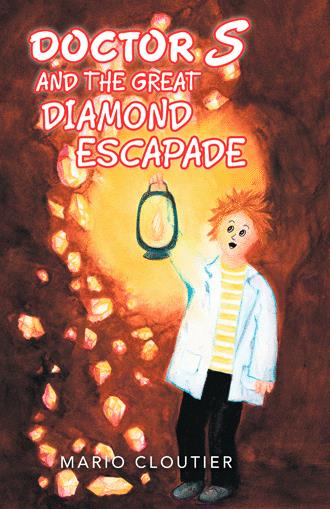 Chapter 1: Friends from Vinydia “Is everything OK, boys?” said Nathan and Sam’s mom. She was concerned. Her sons had just run off to the laundry room upon hearing the news that she had washed four of their plush toys. “Um, yeah, Mom!” replied Sam, a handsome ten-year-old boy with blue eyes, thick dirty blond hair, and a warm smile. Truth is, they were not fine. Sitting on the floor in front of the dryer, they watched their plush toys spin and tumble. Nathan, a charismatic six-year-old with chubby cheeks, big blue eyes, and blond hair, sat with Doctor S on his lap. Doctor S was a lovable plush toy, a human with long, frilly, reddish hair, a white lab coat, and an irresistible smile. Doctor S was, however, no ordinary plush toy. Just one week prior, after being washed in the laundry, Doctor S somehow came to life and claimed to be from a different planet called Vinydia! Being afraid of people’s reaction to a walking, talking plush toy, the boys agreed to keep Doctor S a secret, even from their parents. Doctor S was initially alarmed to awaken in the body of a plush toy on a different planet, but then, as a scientist, he became very excited to experience and learn things about Earth. So, keeping him a secret and out of trouble was a lot more work than the kids had originally realized. They had succeeded so far, but they were exhausted. Now, they were facing the possibility that four more plush toys, White Ninja, a bear, Travis, a dog, Bastien, a frog, and Yoko, a lizard, could come to life when they came out of the dryer. They were overwhelmed at the thought of having to keep not just one, but five living plush toys a secret—and out of trouble. After what seemed to be an eternity of silence, with the three of them staring into the dryer, Doctor S stood up. “I got it!” He began pacing in between the boys and the dryer as he held his chin. After a few moments, he disclosed his plan. “When I came out of the dryer last week, I was confused, dizzy, and disoriented. I also freaked out when I saw you, and it took a while for you to calm me down. We don’t want your mom to hear or suspect anything. There are four of them and only three of us, so we won’t be able to control them all at once.” He paused. “I think the only way to keep them quiet is to tie them up and put tape over their mouths as quickly as possible when they get out. If all goes well, we’ll be able to explain everything without them causing a scene. We don’t want your mom to come to the laundry room and see what is going on.” The boys didn’t know what else to do, so they nodded in agreement. The laundry room was in the basement, next to the garage, which made it easy for them to get the necessary materials for their plan. They cut four pieces of duct tape, set them aside next to the dryer, and cut a rope into eight segments of equal length. They were prepared to put their plan into action, but had no idea how long it would take for the toys to dry. They stood next to the dryer for a while, but it just kept going. Sam was losing patience. “Why don’t we just stop the dryer and take them out?” “No, no, no!” Doctor S put himself between Sam and the dryer door, holding out his arms. “Let it stop on its own,” said Doctor S. “We don’t know enough about how this works. If we stop the dryer too early, it could really mess things up, and I certainly don’t want anything bad to happen to my friends.” Not fully understanding what could happen if something went wrong, Sam agreed to wait for the dryer cycle to finish before putting their plan into action. In anticipation of a loud struggle with the plush toys as they came to life, Doctor S turned on the nearby TV and raised the volume, hoping that would be sufficient to drown out any noises. Finally, after what seemed to be hours, the dryer stopped spinning and the buzzer signaled that the cycle was complete. Even before the buzzing stopped, Nathan had opened the door and grabbed Bastien from the dryer. Bastien, the frog, had a bright green back and a white underbody with spots. He had long limbs, a very big mouth, and one of his eyes was slightly bigger than the other. Sam quickly followed and grabbed Travis, a black and brown dog with long droopy ears and black eyes. Meanwhile, Doctor S grabbed White Ninja, a white bear with a little red nose. Her fur was long, untamed, and would often cover her eyes. Sam and Nathan quickly put tape over Bastien and Travis’ mouths and tied their limbs. While Doctor S was dealing with White Ninja, Sam and Nathan went back in to get Yoko, a bright purple reptilian creature with yellow plates running down her spine. She had huge bulging eyes, pointy ears, and a mouth disproportionally small compared to her eyes. They quickly took care of her, then turned to see how Doctor S was doing. They were shocked to see that he had failed in securing White Ninja’s legs, and was chasing her throughout the basement. Luckily, she already had tape over her mouth! Despite the tape, they could still hear a faint scream coming from her direction, even over the sound of the television. The boys ran towards her to help Doctor S. They had to make sure they caught her before she made her way upstairs. Nathan chased her into the family room, cornered her between the couch and the wall, and lunged in an attempt to catch her. 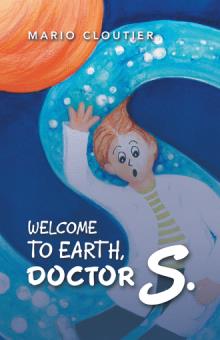 More Vinydians coming to Earth!!!! Dear Reader, One week ago, I awakened in the body of a plush toy on Earth. I am a scientist from the planet Vinydia…not a toy! Luckily, I met two young brothers who have helped me explore and have so far managed to keep me a secret. It hasn’t been easy for them, since my enthusiasm led to a few close calls. Now the boys face the possibility of having some of my Vinydian friends join me on Earth in the bodies of other plush toys. This might complicate things. You see, I have a plan to improve the lives of everyone on my home planet. All I need are diamonds. Sounds complicated, I know, but my plan is fool proof. It involves stowaway air travel to Arkansas, camping, clandestine mining, and, of course, good food. Simple really! What could possibly go wrong? Yours truly, Doctor S.

Mario Cloutier lives in Oregon’s Willamette Valley with the love of his life, his two amazing sons, and a cast of stuffed animals who come to life and cause mischief. The Doctor S book series was inspired by years of creating fun, playful, and sometimes crazy bedtime stories with his sons and their stuffed animals. www.mariocloutier.com