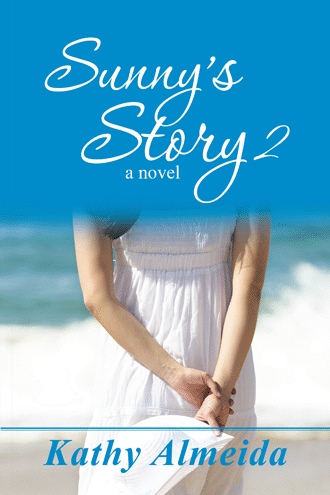 Sunny’s Story 2 Chapter 1 “For real… you’re kidding me right? You and Romeo….not married?” My sister, Rain, asked me, lying on her beach towel in the sand across from me, her bronze skin glistening with moisture. “Nope, it turns out that Jake never turned in our license. So, as far as the state is concerned, we’re not legally married.” I stretched, lengthening my body on my towel, adjusting my big white floppy sun hat that kept falling into my line of vision every time the wind blew. As one long curly lock escaped, I tucked it back under. “Cool,” she said, turning over onto her stomach, permitting the hot rays of the late morning sun to catch her back. “How long have you known?” “Since last week. I was filling out tax forms and had a question, so I called them. They told me that there was no record of any Mrs. Jake Wiley.” “Do you know what this means?” I paused, afraid to continue. I looked over at my fourteen month old daughter, Crescent, playing happily in the sand, underneath the shade of the bright red umbrella. My heart soared as I gazed at her… the dark curly locks that framed her cherub face…her sweet dark chocolate brown eyes like her father’s with long black lashes. I noticed her little mouth, full lips, chewing on her bottom one, as she was busy digging in the sand with her chubby little arms and hands. She sat with her legs wrapped around her pail. She was adorable personified and I wanted to go over and pick her up and smother her with kisses. “Yeah, I know exactly what it means,” Rain said, propping herself up on her elbows. “You’re free from his no good ass.” She crossed her ankles as she dug her bright red toe nails in the sand. “Knock it off, Rain. It means that I’m single and Crescent doesn’t have a last name. It also means she’s a…” My voice trailed off, and I couldn’t bring myself to say the word. “Don’t be ridiculous. She’s either a Johnson like us or a Wiley like him. Either way she’s got a last name, don’t you, baby?” Rain asked, smiling at her niece. Crescent stopped shoveling sand into the bucket long enough to give her aunt a big smile, then it was back to business. Rain added, “Or… we could give her a new name to go with her first and middle names. Crescent Blue goes with… hmm…I don’t know. I thought it was bad enough when Mom and Dad named us Sunny and Rain….seriously what was up with that?” “And then you top it by naming your daughter after a shape and a color.” She suddenly turned onto her back and sat upright. “You can always ask Mr. Can’t-Keep-His-Ding-a-Ling-in-His-Pants, if he wants to make it legal and give her his name, right?” “Jake made one mistake,” I said. “How long before you can forgive him and let it go?” “Well let’s see. Since it was you he cheated on and it was your heart he broke, I guess I could let it go. Let me think about it for a second…..nope I’m good. Even if it was you, I’m still never ever letting it go. Ever….just like in Taylor Swift’s song….’never ever, ever! Once a skunk always a skunk…and he’s lower than a skunk, more like a skank.” “Rain! People can change you know,” I said, burying my feet in the sand while my eyes feasted on the colors of the ocean that today reflected varying shades of deep teal blue. I bit my fingernail again. “Or at least I hope they can,” I added under my breath. “Whatever,” she retorted, and flopping back onto her stomach placed her head on top of her crossed arms. “By the way…where’s that smelly dog of yours?” “He’s down there,” I said, pointing towards the water. “And Beaches is not smelly.” “Yes he is…he stinks like fish and shit.” “That’s because he likes to roll in dead stuff on the beach and in the manure I spread in Kate’s rose garden.” Kate, our beloved grandmother, who had died a year ago last April, had loved her garden almost as much as Rain and me. It was no small mission on my part to keep her roses blooming as beautifully as when she was alive. “Yea, I’ve seen what he has done to the couch after his spa rolls,” Rain said. “I think you need to buy leather couches. They are easier to clean. Or, build him a dog house and leave his butt outside.” She paused, rose up on her arms, and inhaled sharply. “Not going to happen. I like him inside. And nix on the leather couches too. Remember…veggie girl here…not going to happen. I just need to get some slip covers that I can throw in the wash.” “No, what you need to throw in the wash or out with the trash is that dog. And speaking of dogs…thanks to a technicality…Romeo’s out…yay!” “Rain!” Romeo was her ‘pet name’ for Jake. She’d been calling him that since my first date with him. My mind flashed back to that night of nights. We were sitting on the couch, eating popcorn. The power went out. The lights went on…only it wasn’t the power. Nope, it was Jake’s hands and lips on me, igniting my virgin pilot. Yes, I was a twenty six year old virgin. Unheard of, right? It was a date that ended in an overnighter, I lost my virginity, fell in love and later discovered I was pregnant with our baby girl. 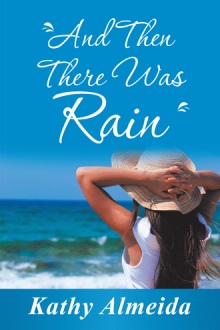 And Then There Was Rain
Kathy Almeida
$17.99

Sunny’s Story, the first novel in this trilogy, tells the story of a young woman, Sunny, who falls in love, finds out that she’s pregnant, marries, is betrayed, and then sets out on her own to discover who she is and what she wants. Sunny’s Story 2, picks up where the first one left off. Be prepared for more adventures, laughs, tears and ultimately love, as Sunny lives her life ‘out loud’ surrounded by her family and friends, while choosing to trust and love again. Will she choose Jake, the one who broke her heart? Or will she choose Keeve, the one who loves her unconditionally? Or will it be somebody new? Even if you missed the first book, no worries…Sunny’s Story 2, set in the picturesque town of Crescent Beach-just south of Saint Augustine, Florida-will capture your heart and keep you entertained until the very end.

Kathy Almeida is a creative artist. She lives with her family and animals on a small farm in Belleview, Florida. She enjoys creating, living and loving, with lots of trips to the beach. Sunny’s Story 2 is the sequel to her first novel and her third book.