A Lover’s Potion and Other Stories 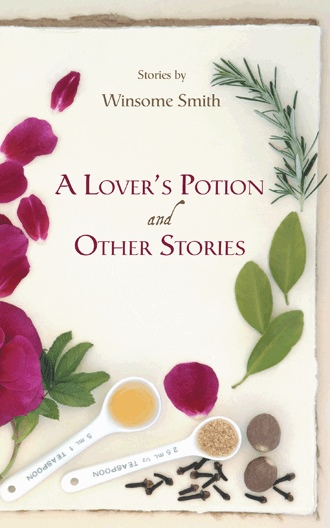 When Mistress Pettigrew’ butter would not churn I had a great laugh but Mistress Pettigrew was angry, especially when one of her hens died suddenly. Mistress Pettigrew raged around the village for a day or two declaring that non-churning butter could only be caused by witchcraft. She was a bad tempered dame anyway and I was glad when things went wrong for her.

Fear spread quickly through our village and the surrounding farmlands. There had always been stories of witches and we had heard that in other shires witches had been burned.

Strange happenings were not new in our village. Young Eddy Makepeace ran into the tavern in great distress one bright sunny afternoon. He had been walking along one of the lanes and happened to be admiring his shadow cast by the summer sun. He suddenly noticed another shadow walking right beside his – and there was no-one there to cast that shadow.

Stories proliferated. Master Cooper was walking home from choir practice one moonlight night. They only met three nights every month when there was enough moonlight for people to see their way. As he strode quickly past a hedgerow he felt a sudden weight on his shoulder. He glanced to the left and saw a hand there. It grasped his shoulder for about a minute, almost causing him to stagger, but it was only a hand, nothing else.

When two of the village children came down with the spotted disease, people looked around for someone to blame and suspicion fell upon my sister, Jennet. I believe the suspicion had begun some time before because my sister is so very beautiful. She has long raven hair and skin as white as milk. Heads turn as she walks past. People don’t notice me as much because I am very ordinary to look at; I have brown hair, and a dull complexion and a pudding-plain face. My name is Isabel.

My sister lives by herself in her own little cottage – very unusual in our village. Jennet lives in her own cottage because she likes to grow herbs and she likes to distil them in her own kitchen. I live with our mother because she is old and needs looking after. My mother and I have a vegetable garden and we are lucky enough to have a cow. Our mother had six children but only my sister Jennet and I survived.

Jennet is also scholarly and has a serious nature. Few people here can read but Jennet reads books. The wife of a previous parson liked Jennet and taught her to read and write. She is shy and does not always take part in ceremonies and games. She has never been in a maypole dance. All this is regarded as suspicious behaviour.

I, on the other hand, am lively and love a bit of mischief. At haymaking on the farm of Jed Wallace I make the work into fun and I love to sing rude songs. I once persuaded Josephine McDonald to gaze at her own reflection in the water of the pond. As she leaned over I pushed her in. It was such a joke.

Short stories are but a slice of life, yet they are complete, even in few words. Although the endings are not always happy, they are indeed endings. These slices of life take us to many times and places, where we meet people with a distinct set of problems—and sometimes, if they are very lucky, solutions. A Lover’s Potion is an imaginative walk through fantasy and fiction. In these collected stories, we visit a small shire where witchcraft mania runs wild. A peasant girl becomes pregnant with her aristocratic lover, who presents her with a gift of jewellery, confounding a team of modern archaeologists. There is even a girl with incredibly long hair, locked in a tower, but she is not what she seems. Each story focuses on people and their fascination with one another. All human beings share desires, endeavors, and loyalties. Through actions, we reveal ourselves. The characters in these stories each long for something—and in some cases, the characters aren’t human at all. Read of compassion, romance, and revenge in this riveting collection of wiles and whimsy.

Winsome Smith is the author of twelve books, although short story is her favorite medium. She grew up in New South Wales, Australia, but her stories span the globe.