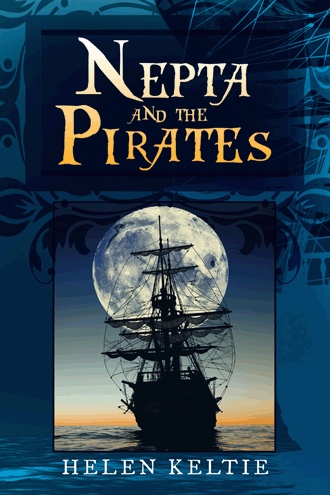 Sixteen-year-old Coralie leant over the balcony and called down to her brother Nepta.

“Why do you need a boat, Nepta?” Nepta continued nailing and when he was finished, he looked up.

“Because I have a yen to visit the earth world.” He paused and smiled up at her, “Would you come with me?”

Coralie tossed her black seaweed hair and shrugged her shoulders, “I might, if only to avenge my father’s death.” She glowered and then muttered, “If only I could see them again, I’d get even!”

Nepta spoke bitterly, “I know how you feel, but Josh and Katie didn’t kill our father.” He was never really certain how his father, Bragh, had died, but he knew it couldn’t have been Josh because he had returned to his own world.

“What do you think I should name this boat?” He thought for a while…“How about Otriana?”

“Definitely not!” Coralie grimaced. “Our lady Otriana would be jealous.”

Nepta retorted, “No she wouldn’t, she’d be flattered. Alright, what do you suggest?”

Nepta nodded his head, “Miffy II it will be, as the first Miffy died here.”

Nepta, who wasn’t a really skilled boatman, had been learning from one of the ferrymen. Nepta visited his boating friend to tell him about his boat and what he planned to do.

“Nepta, this is a silly idea of yours. We are right out in the middle of the ocean.  No land for miles. How do you expect to find the earthlings you knew?”

Nepta replied, “I’ve thought about that. Katie returned to earth via the volcano. So if I navigate to there and then surface, I hope I will be somewhere near where they live.”

The ferryman shrugged his shoulders, “It seems you are set on this. Have a word with Wizen before you go on this mad journey.”

Nepta had considered talking to Wizen and nodded his head, “I intend to.”

Wizen was in his garden arranging shells along his footpath. He straightened up when he heard Nepta call, “Nepta, my boy. Glad to see you. Come inside and have a chat. I haven’t seen you for so long.” He slapped Nepta on the shoulder.

Wizen looked at this strong young man with such vivid blue eyes and tears flowed from his own. He regarded Nepta as a son.

“Yes, I’m sorry Wizen. I’ve been building a boat and I’ve come for some advice.”

“That sounds ominous.” Wizen poured two glasses of sea wine. “It’s made from my special green seaweed.” He smacked his lips, “Very tasty!” Then he laughed, “Earthlings can’t drink it. It makes them forget everything.”

Nepta grinned, “It could come in handy because I intend to surface and…”

Wizen spluttered, “You’re going up there?” he pointed above his head. “Don’t be stupid. It’s a more dangerous world than this one.” He swallowed a mouthful of wine. “Nepta, if you’re hoping to find Josh and Katie, it will be a fruitless search. Don’t do it, my boy.”

“I want to see them badly and I came to you for some advice.”

Wizen sighed, “It seems you’ve decided. How can I help?”

Nepta queried, “Firstly, I need a map, in particularly the area near the volcano. Secondly, some of our take away food to supplement my diet of earth food. And any other advice you think I may need.” He finished his drink.

Wizen swam over to a chest in the corner. “A pirate’s chest,” he laughed. “It was full of treasure. I gave most of it away. There’s a map in here somewhere.” He rummaged around and produced a yellow, torn piece of parchment. “No, I don’t think this will help. It’s too old.” He murmured some words and the parchment became white and the tears in the paper disappeared.

“Now let’s see. You need the area of land surrounding the volcano.” The map slowly began to show land mass, compass directions, gulf streams and shipping lanes. Wizen studied it, then nodded his head. “Keep it moist, otherwise the map will fade. Look, here is the country I imagine Josh and Katie to live in. You’ll have a lot of questions to ask before and IF you find them.” He looked at Nepta, “Do you have any magic left?”

Nepta shook his head, “No, only to transform one living being into another, but I’m taking Coralie with me. She learnt much more magic than I ever did.”

Wizen was shocked, “No Nepta, don’t take Coralie! She’s vindictive. I’m sorry I have to say that, but can you trust her?”

Nepta grinned, “We’ve had our fights, but she’s never done me any harm. Although she did say she wanted to avenge our father’s death.”

“Josh and Katie didn’t kill your father. Miffy started it and the sea snakes completed the job.” He described how he and Katie had found Bragh and Miffy after the sea snakes had killed him.

Nepta closed his eyes, “Well I’m glad it wasn’t Josh or Katie. I never thought they could have done it.”

Nepta and Wizen had a long chat. Wizen gave Nepta a bottle of sea wine and a ring.

“This ring will help you whenever danger threatens. Only put it on your finger when you need to.” He placed it in a little bag on a chain and hung it around Nepta’s neck. He foraged in the chest again and produced a pair of trousers, a shirt and a cloak.

“You’ll need these when you reach the surface. There’s also some coins here to help you buy anything. Tap them with the ring and they’ll change into the local currency. Take care and good luck!” Wizen hugged him.

Coralie listened carefully to everything Nepta had to say. She draped the cloak around her and laughed, “I’d say very much out of fashion, but I can change that.”

Nepta tried on the shirt and trousers. They were rather large on his slim body, but Coralie eased his mind, “I can adapt them when I see what people are wearing.”

They packed the boat carefully and said goodbye to their mother, Meerlyn, who tearfully watch them leave. “Come safely back to me,” she cried softly.

There was no problem steering the boat to the volcano. It was quiet, so with her magic spells, Coralie guided the boat to the surface. When they surfaced, the sea was calm. The sun was shining.

Otriana rippled, “Safe journey, my intrepid ones. Return to me soon. I know the people you seek, so I shall speed you on your way.”

The boat flew through the water and soon land appeared on the horizon. Otriana rippled, “The town is called Lumenvale. Your friends live nearby, but closer to the mountains. Farewell and good luck!”

Nepta steered the boat towards the jetty. All was quiet. There was no one about.

It has been twelve years since twins Josh and Katie Jenkins were unwittingly propelled into the underwater world of Otriana while searching for their neighbor’s dog. After meeting Nepta and his sister, Coralie, who help the twins escape Otriana, their adventures eventually lead them to be accused of murdering Nepta and Coralie’s father. Now, Nepta wants to visit the earth world to see the twins again. But there is only one problem: Coralie wants to accompany him and she is out for revenge.

After a merman gives Nepta a bottle of sea wine and a magical ring, Coralie slips on the ring, bringing a pirate captain from the 1740s into the present day to retrieve his beloved ring. When they manage to escape with ring in hand, Nepta and Coralie meet up with the Jenkins’ twins and their younger sibling, Kyle. Now together with help from several companions, Nepta journeys through an unforgettable adventure where he must learn how to properly use the ring to banish the pirates forever.

In this entertaining young adult fantasy, young earthlings and their underwater friends continue their escapade through sea and land where good battles evil and the past confronts the present.

Helen Keltie is a retired paediatric nurse and widow with two children and three adult granddaughters. She loves writing children’s stories and playing croquet, otherwise known as “Hit and Giggle.” She lives in Portland, Victoria, Australia, where she is hard at work on the final book in her trilogy.