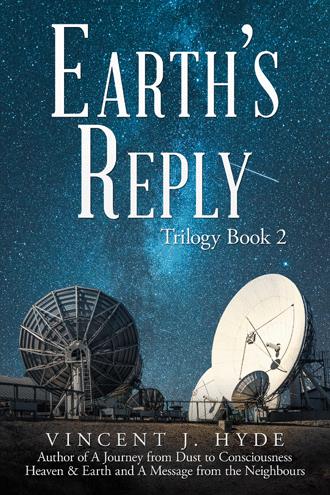 Earth’s Reply is the second book of a science fiction trilogy. The first book, published in October 2018, is A Message from the Neighbours. In A Message from the Neighbours, the robot Interface arrives near Earth’s solar system in a bullet-shaped space probe. The space probe connects with an interceptor shuttle from Earth about one light year from Earth. Interface gives the astronauts a metallic artefact which contains a visual recording of the neighbours’ world. At a meeting held at World Plaza in January 2506, Director Samuels activates the visual recording. The image of Interface displays a message from the neighbours. In Earth’s Reply, the directors, led again by Director Samuels, develop a plan to reply to the message delivered by Interface. The plan is to be implemented over a period of two hundred years. The plan allows for visiting the neighbours. Unfortunately, none of the directors who first implement the plan will be alive to see the end result. However, through their Fields of Knowledge new stars will be born. A new set of directors in new fields will activate subsequent stages of the plan, making it a reality. In a surprising way, Earth’s reply is successful. The questions raised in the introduction of A Message from the Neighbours—namely, will Earth accept Interface’s invitation and choose to visit the neighbouring world, and how will Earth reply to the message—are answered in Earth’s Reply. However, the reader will have to read the final book in the trilogy, The Alien World, to discover the alien world. To find out how the director’s succeeded you will need to read this book. The second book of the trilogy ‘Earth’s Reply’. 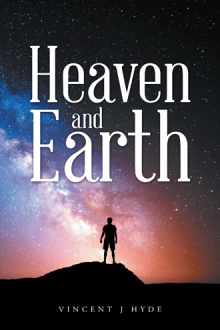 In 2503, the World Council re-elects Samuels as Director of Space Research. He is tasked with developing a reply to the message delivered by the alien robot Interface. After many stops and starts, the Directors decide to send a robot, Nuwoman, to track and follow Interface, who they believe is returning to his alien civilisation. The twenty-sixth century has seen rapid development in space technology and robotics. Habitats have been developed on the Moon and Mars, all in an attempt to set up ways to track the spaceships of both Interface and Nuwoman. However, Interface does not behave as expected. Instead of returning to his alien civilisation, he makes a detour. He lingers in the shadows of the Alpha Centauri triple star system, waiting for Nuwoman. Interface becomes infatuated with the development of Nuwoman. This incredible meeting of two like minds is both intellectual and romantic—and not at all what the Directors expected. Nevertheless Earth’s reply to the message from the neighbours is a success.

Vincent J. Hyde was born in September 1954 in Calcutta, India. While living in Calcutta, he studied at Saint Xavier’s College. He migrated to Sydney, Australia, in February 1970. While living in Sydney, he completed his secondary education at Marcellin College and Merrylands High School, where he obtained his Higher School Certificate in 1973. He completed the electrical engineering degree course at the University of New South Wales in 1979. He completed a postgraduate diploma in illumination design at the University of Sydney in 1983. He worked as an electrical engineer at the New South Wales Public Works from 1979 to 2014 and retired from active engineering duties in 2014. Since 2014, he has been writing to continue his professional development. He has written three books with publisher Balboa Press: Heaven and Earth, A Journey from Dust to Consciousness, and A Message from the Neighbours. He is a current member of the Institution of Engineers Australia MIEAust, Chartered Professional Engineer (Ret) No. 1387147.