Stoicism, Bullying, and Beyond 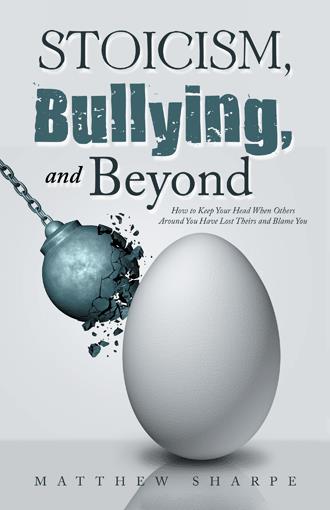 Why Stoicism for bullying targets? There are several key dimensions of Stoicism which equip it especially well to face the challenges targets face. 1. Preparing for difficult encounters and conversations: so long as the targets stay in their workplaces, and the bullying or mobbing is not stopped, the first call of business is enabling them to continue to work productively in an increasingly hostile environment whilst maintaining a functional level of equanimity. Stoicism’s practices of premeditating adversities, in order to prepare for even the worst eventualities, is an invaluable practice here. 2. Dealing with insults: Stoicism’s emphasis on keeping your head when others around you lose theirs saw them developing powerful philosophical strategies for dealing with an experience all targets will share: that of being insulted, slandered and misrepresented, whether openly or behind their backs. Stoicism’s practices for dealing with--and taking the “teeth” out from--insults and false accusations, key weapons in bullies’ arsenals, are too-little-known tools which bullying targets can draw upon when their colleagues continue to bait them, hoping to cause distress and anguish. 3. Reclaiming boundaries: bullying or mobbing has been described by Heinz Leymann in his classic work Workplace Mobbing as Psychological Terrorism: How Groups Eliminate Unwanted Members as a form of “psychological terrorism”. It is an experience in which the boundaries of the individual’s sense of self are undermined: their professional self and capacity to work, their social self and right to recognition, and their personal selves, in cases where their privacy is withdrawn and their private lives are discussed behind closed doors, or mocked to their faces. Stoicism is a philosophy which stresses the importance of knowing what is in our control, and what is not in our control, and taking ownership of the difference. 4. Reclaiming agency: we’re going to see that bullying and mobbing are so insidious and potentially damaging for targets insofar as they involve firstly actions intended to demean, belittle, disempower, or shame the targets, and secondly, attempts to silence any criticism or complaints against these actions, or depict these effects (the target’s responses) as the causes of the problem. As a result of this “one-two punch” aspect of the phenomenon, as we will call it, the target experiences both the hurt of the first blows, and then the shock and further insult that their hurt is not recognized or taken seriously by the people, managers, whom they had supposed would protect their wellbeing in the workplace. Instead, they are “revictimized” and blamed for what is happening to them: they “had it coming”. Stoicism maintains that all human beings have the inalienable capacities to think and govern their own lives. This is non-negotiable. We cannot control what others feel right to say and do. In cases of mobbing, the direct avenues of redress within our workplace may in addition have been effectively taken from us--if the bullies either are themselves managers, or have recruited managers, who hold formal power over targets. But we do have control over how we respond to all of this, and what we do with the difficult hand that fortune has dealt us. 5. Dealing with our emotions: the target of workplace bullying is intended by their bullies to feel bad about themselves, their work, their life, their prospects, their very worth as a human being and potentially productive member of the workforce. We’ve already indicated the cocktail of emotional stressors targets report experiencing (see Chapter Three). Because of the one-two punch structure of bullying, if a target shows their rage, their confusion, even their despair, this emotion is often turned around against them by the bullies. “Gotcha! See, this person is not a good fit … difficult … unstable … has a martyr complex … is in need of help. Have we not been saying this all along?” If the bullies have managers onside, the whole thing takes on the aspect of playing Monopoly with the banker. The Stoics wrote consolations for people experiencing grief and loss, even exile: the last, a situation which is not altogether foreign to many bulling targets who face isolation and silencing in their workplaces. Seneca wrote a text on how to handle anger, another emotion targets feel when they begin to understand what is happening to them. Many of the insights these Stoic texts contain about how to reduce anger, and turn melancholic grief into more affirmative forms of mourning, are uncannily relevant to bullying targets in workplaces today. 6. Managing symptoms of stress, anxiety, PTSD: from the earliest dedicated studies, results have again and again showed that experiencing workplace bullying is amongst the most stressful experiences people can have. It has damaging psychological effects, and these can cause a raft of flow-on, physiological illnesses, from stomach and heart complaints to high blood pressure and sleeplessness. In too many cases, mobbing can lead to the very worst outcome. This is that the target feels so helpless, confused, and unhappy that they take their own lives. Stoicism’s practices for paying attention to what we are thinking, and its stress on the importance of separating what is and is not presently under our control can nevertheless assist targets, as they wrestle with typical symptoms of mobbing like hypervigilance, insomnia, and the involuntary repetition of memories and thoughts about their experiences. From a Stoic perspective, no one can fully control when the internal manifestations of fear, stress and trauma might affect us. But we can become more aware of them, and better able to live with (and even reduce) them, rather than them “living through us”, and dragging us down. 7. Planning for beyond: for the Stoics, you are not what others say about you, let alone what a small clique of mobbers of their enablers allege. This remains true, even if your bully or bullies manage to convince enough people to give you legitimate concerns that your professional reputation is unalterably damaged.

This is the first book applying Stoic philosophy, and its extraordinary exercises in resilience and self-care, to the epidemic problem of bullying and ‘mobbing’. Aimed preeminently at targets, it offers guidance on managing negative emotions, and making good decisions, in what for many people is the greatest challenge of their lives.

Matthew Sharpe teaches philosophy and psychoanalytic studies, and has published both academic and general audience articles on Stoicism as a lived philosophy. He is the coauthor of Philosophy as a Way of Life: History, Dimensions, Directions (Bloomsbury, 2021), and an organiser of the Melbourne Stoicon-x events. Matthew is the 2022 winner of the Australasian Association of Philosophy media award for his piece on the Stoic Epictetus, “When Life Gives You Lemons”.