The Secret Signs the Universe Wants You to Know

When the Going Gets Tough, Have a Little Faith! 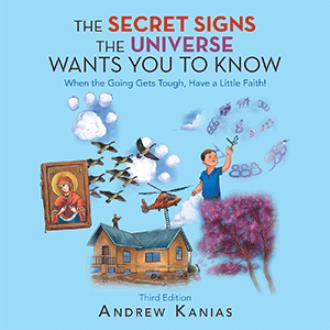 When It All Started In 1993, when I was 23, I suffered what my sister described as a nervous breakdown. To me, it was the beginning of the most horrendous time of my life. I was in my final year of university and had all sorts of fears and worries going on in my mind. These fears and worries eventually led to severe panic attacks and depression which took me years to overcome. Over the years, I learned to control the anxiety through natural methods such as meditation, relaxation, visualisation, NLP, positive thinking, affirmations and many more. However, five years ago, when life was going better than ever, I had a re-occurrence of severe anxiety. It was a difficult time. The date was Thursday September 10th 2015 and I was locking up by myself after one of my Karate classes. I remember it clearly because it was my niece’s birthday and I was heading to a restaurant to celebrate. As I left the large, empty school hall and closed up, I felt a tickle in my throat. I coughed. And then I coughed harder. And then I coughed again even harder! It wouldn’t go away! I shoved all my bags containing karate equipment into the car and drove out of the double iron gates before padlocking them. Behind me, the darkening sky added to my apprehension. The tickle in my throat was still there and I kept coughing and coughing but it wouldn’t go away. I began to lose my breath. My heart rate increased and I bent over in an attempt to recover. I looked around for help but there was no one there. Only the silence of the upper-class, residential road. I gasped and felt as though I was about to die. And no one would know! Still bent over by the iron gates, I coughed one last time with all my might and that’s when I felt the panic grow inside me like a tidal wave rising on a quiet ocean. It was a panic that was all too familiar to me. And as I thought to myself, ‘this is the end’, I somehow found my breath again and began to breathe, be it shallow. The tickle had gone and I suddenly felt as though I was going to be okay. The incident shattered my confidence and was the beginning of another two-year battle to overcome anxiety. What happened next is documented in this book. How I found a renewed strength and confidence and the ability to live a happy life. I went from being anxious about absolutely everything to achieving some long-life goals such as speaking on stage to more than a thousand people, writing books, playing tennis and giving live online talks. And I got back to enjoying all the things I so missed like watching a good film in the cinema, competing in Karate, traveling and going to the gym. I’m not saying I’m super-human. I still wouldn’t Bungee Jump hundreds of feet from the Earth, parachute jump from a plane or climb Everest. It’s about doing the simple things in life so many of us don’t do because of our fears, negative thoughts or limiting beliefs. And my wish for you is that this book will: ● Help you to overcome challenges ● Help comfort you in times of need ● Help you to let go of fears ● Guide you to achieve your true potential ● Bring peace and meaning into your life

Andrew Kanias reveals what he’s learned about the secret signs he’s discovered the universe wants us to know in this incredible book since September 2015 to the present. He began seeing the signs in September 2015, when he started to notice odd coincidences, strange occurrences, and obvious signs. He came to believe the signs were coming from the universe (or God), with the sole intent to help him along on his journey. Filled with colorful drawings, the book is clear and concise and answers questions such as: • How can you recognize the signs the universe is sending you? • How do you use these signs to your advantage? • What are the most common signs to be on the lookout for? • Can you receive signs while you sleep? The book includes many uplifting stories, including the miraculous tales of people such as Anita Moorjani, Annabel Beam, and Neale Donald Walsch. It also has affirmations, meditations, prayers, and a detailed list of spiritual references and resources. If you’re happy, that’s great. But if there’s more calling you, then ask the universe for a sign, for guidance, and to help you discover the person you really should be.