by Herman and Pamela Odijk 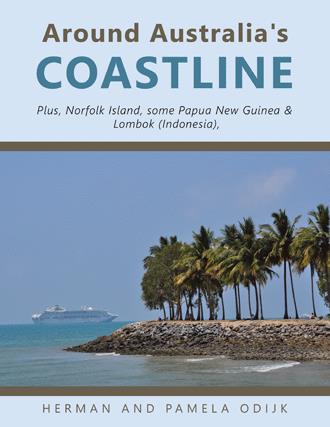 It is said about people who travel, that they go all over the world, and then return and look more closely at their “own back yard” – their own country. That applied to us even though we had lived in many parts of NSW, Tasmania, ACT, Queensland – and Herman in PNG. Our Around Australia’s Coastline adventure included extra bonuses – destinations to Papua New Guinea, Lombok (Indonesia) and Norfolk Island all of which are considered our neighbours. We believe that cruising is the best way to see Australia as most capital and provincial cities are on the coastal fringe. They emerged from a Colonial past of mainly convict settlements that could only then be reached by sea – and which also made it easier to control such settlements.The inland was unknown and potentially hostile until our overland and seafaring explorers ventured further to rediscover that which the indigenous population had known for 40,000 years or more. European settlements then followed inland. And, of course there is the love Australians have for the coast and the beaches and want to live near these. Besides, cruising has additiional benefits. You only unpack once, travel in luxury and wait for the destinations to turn up! (Although we do consider each cruise ship to be a different destination in itself.) It gives you time to talk to others who have visited these areas before, time to listen to on-board presentations about each destination – and a few warnings. Time to learn new things and eventually better appreciate those new experiences. Why is there so little text? We thought it only necessary to identify places and other things, give a brief description of each place, as they are far between and each evolved extremely differently. For those who want to know more detail – there is always the Internet. And Herman’s 725+ photographs say it all! They show the beauty of places, reveal the unusual, that which depicts the unique “character of a place”, strange things, amusing things, things that the tourist brochures don’t usually depict, and those things that other people rush past and miss altogether. At each destination we took bus tours around the area and to specific destinations. We also did a lot of walking until this became more difficult, and then we used mobility scooters to great advantage – and yes, you can use them on-board ship and ride them into public buildings /areas, galleries, museums, acquariums etc. provided you have appropriate permission. (We have never been refused.) So, come with us and enjoy the photo-log of our experiences… Herman and Pamela Odijk P.S. Oh – and if you think we left our “cousins from across the ditch” New Zealanders out , well we covered them in our previous book.