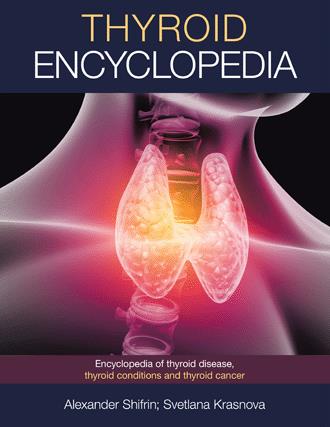 Surgical margin Surgical margin is the visible normal thyroid tissue that is removed with the surgical removal of a thyroid gland. A negative surgical margin means that the outer edge of the tissue removed is clear of any cancer cells. A positive surgical margin means that cancer cells or tumor extend to the edge of the sample. Surgical resection (see surgical excision) Suspicious thyroid biopsy Suspicious thyroid biopsy refers to an atypical cytological features suggestive of, but not diagnostic for malignancy. Usually this referred to a Bethesda category 5 – suspicious for malignancy. The risk of malignancy for Bethesda category 5 is about 50% to 75% depending on expertise of different hospital’s pathologists. Duse to such a high risk of cancer, surgical removal of the thyroid lobe with a nodule, or entire thyroid, is required for cure and for a definitive diagnosis. Synthroid Synthroid is a brand-name for Levothyroxine Sodium. Synthroid is a synthetic compound identical to T4 (levothyroxine) produced by the human thyroid gland. It is a thyroid medicine that replaces a normal human thyroid hormone. It regulates the body's energy and metabolism. Levothyroxine is given to replace the thyroid function after the surgery (thyroidectomy) and when the thyroid does not produce enough of its own thyroid hormones (hypothyroidism). Many drugs and food components can inhibit Synthroid's adsorption. Synthroid works best if it is taken by itself, in the morning on an empty stomach, at least 30 to 60 minutes before breakfast. Synthroid is prescribed in tablets that range from 25 to 300 mcg in strength and is usually taken once a day with a full glass of water. Systemic Therapy Systemic therapy refers to any type of cancer treatment that targets the entire body. For example, chemotherapy is the most common form of systemic cancer treatment. Tyrosine kinase inhibitors are also considered a systemic therapy. T T3 (see triiodothyronine) T4 (see: free T4, thyroxine, Tetraiodothyronine) Tall cell variant (Fig 84) Tall cell variant is a variant of papillary thyroid carcinoma (PTC) with cells that are twice as tall as wide. Current guidelines use 30% as a cutoff number of tall-cells in the tumor to defined a PTC as a tall cell variant. Papillary thyroid cancer is the most common cause of thyroid cancer and most cases have excellent outcomes. However, some papillary thyroid cancer variants have been shown to be more aggressive, such as tall cell variant. Tall cell variant of PTC is more aggressive and comprise about 4-10% of papillary thyroid carcinomas. Tall cell variant is showing higher rates of spread to both lymph nodes and to outside of the neck as well as having poorer radioactive iodine avidity, with poorer prognosis such as increased rates of cancer recurrence and decreased survival. Taller-than-wide thyroid nodule shape Thyroid ultrasound is the best study to evaluate thyroid for the presence of nodules. The most recent American Thyroid Association guidelines recommend using thyroid ultrasound to assess the risk of thyroid cancer. There are several ultrasound characteristics of a nodule that may predict the likelihood that the nodule can be cancerous. One of those features is the shape of a nodule. A “taller-than-wide” feature of the thyroid nodule on ultrasound imaging is associated with higher likelihood that the nodule could be cancerous. Also the size of the nodule on ultrasound is a major determinant of which nodules should be biopsied. One characteristic of this features does not mean that the nodule is cancerous but combination of several features increases the likelihood that this nodule is cancerous. Other features on ultrasound also raise suspicion of cancer. For example, the presence of calcifications. Thyroid lobectomy (see hemithyroidectomy) Surgery to remove one lobe of the thyroid. Thyroid lobectomy has advantages over total thyroidectomy in decreasing surgical complications and potentially avoiding the need for lifelong thyroid hormone therapy. Thyroid nodule (Fig 90) Thyroid nodule is an abnormal growth of thyroid cells that forms a lump within the thyroid gland. Another term for the thyroid nodule(s) is “goiter” (see this term elsewhere in this vocabulary). While most thyroid nodules are non-cancerous (benign), 5 to 10 % are cancerous. Thyroid nodules can be “solid”, “complex”, and “cystic”. Solid thyroid nodules are comprised of thyroid cells or other cells. Complex thyroid nodules are partly solid and partly fluid filled (honeycomb appearance). When nodules contain fluid, they are called cystic nodules. The thyroid may contain just one single nodule - solitary thyroid nodule or uninodular goiter, or several of nodules called multinodular goiter (see this term elsewhere in this vocabulary). The nodules can be very small (few millimeters in size) or larger (several centimeters in size) and there is often a dominant nodule (the biggest one). Nodules can be normofunctional, hypofunctional (“cold” nodule), or hyperfunctional (toxic nodular goiter, “hot” nodule). Thyroid nodules are very common and can be found in up to 50% of the population, mostly female after age 50. The best test to evaluate thyroid nodule(s) is neck/thyroid sonogram (ultrasound). Thyroid function should always be evaluated with blood TSH level. Sometimes T3 and T4 levels are added. After confirming the functional status of the nodule the next step in evaluation of the nodule is determined. It is almost never recommended to biopsy “functional” (“hot”) nodule. Most solid and some complex nodules with the size bigger then 1 cm are evaluated by ultrasound guided fine needle aspiration biopsy (FNAB). But the indication for biopsy is varies based on ultrasound appearance of the nodule and indication for the biopsy determined by the expert provider. The best diagnostic test to determine if thyroid nodule is cancerous is by fine needle aspiration biopsy (FNAB). (See “Thyroid nodules ranking system”). Most nodules can be observed if the biopsy is benign and the size of the nodule is less then 4 cm. Follow up thyroid ultrasound is essential to determine changes in size or appearance of the nodule. Usually 6 months to 1 year follow up with thyroid ultrasound is performed.

The Thyroid Encyclopedia is intended to help all patients, and their family members, to better understand thyroid diseases, thyroid cancer, and thyroid problems. The goal of this book is to educate the patient, as well as help them understand all aspects of their disease and treatment process. Most of the time patients have questions related to the interpretation of their specific test results, the meaning of specific medical terms of their diagnosis, and their treatment plan. A majority of patients, who are reading their own laboratory, radiology, or pathology reports, are not familiar with specific medical terminology related to the thyroid gland and thyroid disease. Sometimes, physicians and health care providers are not available to discuss, or do not have enough time to explain to the patient and interpret all nuances of their diagnosis, test results, or treatment plan. Throughout my 15 years practicing thyroidology (treating patients with thyroid diseases), I have realized that there is not enough information presented to patients during their visits and that patients still have multiple questions leaving their appointments. There is no specific designated practice provider who can explain and interpret to the patient all specific terminology related to her/his disease. The idea to educate and to help the patient along throughout their journey and through their cure is the main reason that the Thyroid Encyclopedia came alive.

Alexander Shifrin, MD, FACS, FACE, ECNU, FEBS (Endocrine), FISS Clinical Associate Professor of Surgery, Rutgers RWJ Medical School; Associate Professor of Surgery, Hackensack Meridian School of Medicine; Director of Endocrine Oncology at Hackensack Meridian Health of Monmouth and Ocean Counties; Surgical Director, Center for Thyroid, Parathyroid and Adrenal Diseases; Jersey Shore University Medical Center After completing General Surgery Residency Program from superb academic universities, University of Pennsylvania and Penn State Milton S Hershey Medical Center, and two fellowships, Surgical Critical Care at Penn State and then Endocrine Surgery Fellowship at Columbia New York Presbyterian Hospital, in 2006 he established the first Endocrine Surgery Program in New Jersey at Jersey Shore University Medical Center. With more than 15 years’ experience as an Endocrine Surgeon and the leader of the busiest and the most successful Endocrine Surgery Program in New Jersey, he was elected as a Vice President of the New Jersey Chapter of the American Association of Clinical Endocrinologists and become one of the first surgeons granted the status of the Fellow of the International Society of Surgery (FISS). He has attained three Board Certifications: • by the American Board of Surgery (ABS), • by the American College of Endocrinology in Endocrine Neck Ultrasound and Ultrasound Guided Thyroid Biopsy (ECNU), • by the European Board of Endocrine Surgery (FEBS). One of the most successful parts of his academic career was his publishing experience. Beside multiple medical articles in peer-reviewed medical journals, he has published several medical books and atlases. Completing an extensive list of publication including seven endocrine surgery books within the past three years as the editor: • “Atlas of Adrenal Surgery" by Springer • “Advances in Treatment and Management in Surgical Endocrinology” by Elsevier • “Avances en endocrinología quirúrgica” Spanish Edition by Elsevier • “Atlas of Parathyroid Surgery" by Springer • “Atlas of Parathyroid Imaging and Pathology” by Springer • “Endocrine Emergencies” by Elsevier • “Endocrine Surgery Comprehensive Board Exam Guide” by Springer • “Atlas of Thyroid Surgery” by Springer. Collaboratively publishing the first Endocrine Surgery Board Exam preparation manuscript, “Endocrine Surgery Comprehensive Board Exam Guide” was a detailed and complicated process involving managing collaborative efforts of world leaders in Endocrine Surgery, and the international community through Springer publisher. Svetlana Krasnova, RN, MSN, FNP-C, RNFA, CNOR. Family Nurse Practitioner who has been working at the Department Otolaryngology- Head and Neck Surgery at Rutgers University School of Medicine. She graduated at the top of her class with Honors in Master’s Degree in Nursing from Georgian Court University, and then received Advance Nurse Practitioner Degree as Family Nurse Practitioner (Adult and Pediatric) from Monmouth University. She published several book chapters on thyroid diseases.