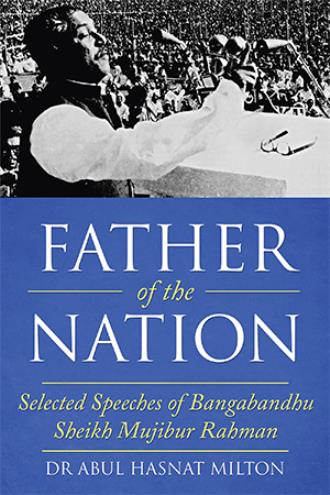 Bangabandhu Sheikh Mujibur Rahman was an extraordinary orator. He was termed as a ‘poet of politics’ by the international ‘Newsweek’ magazine in April 1971. With the magic of words, he could awaken people.

During the turbulent late 1960s and early 1970s, he gave speeches that showed Bengalis the way to freedom. And at the forefront of Bangabandhu's great speeches is the one he gave on March 7, 1971, in a crowded Racecourse ground in Dhaka (now known as Suhrawardy Udyan). By leading the Bengali people to independence, Bangabandhu Sheikh Mujibur Rahman became the Father of The Nation and the leader of the world's oppressed peoples' liberation movement.

This book contains 25 selected speeches of Sheikh Mujib. These speeches will provide insight into Bangabandhu's overall leadership ability. Therein lies the path to the liberation of the world's marginalised people. The words spoken in these speeches are still relevant today, despite being delivered decades ago. This is a must-read for those interested in Bangladesh's independence struggle, Bangabandhu, or the Third World citizens. Aside from that, we think our readers will enjoy this book. They can understand how, despite being the leader of a small South Asian country like Bangladesh, Bangabandhu emerged to become one of the world's most influential leaders in his time. Readers can also discover how a leader overcame adversity to change the path of his country and time.

“I have not seen the Himalayas. But I have seen Sheikh Mujib. In personality and in courage, this man is the Himalayas. I have thus had the experience of witnessing the Himalayas.” -Cuban leader Fidel Castro speaking about Mujib during the Non-Aligned Summit held in Algiers in 1973.

“The Indian subcontinent is going through a hard situation due to ideological misleading and we have many reasons to seek help from Bangabandhu aiming to get encouraged and direction to this end. Sheikh Mujib’s thoughts and judgments are still relevant.” - Nobel laureate Amartya Sen.

“Bangabandhu Sheikh Mujib was ahead of his time. He was a champion of human rights who fought against oppression and exploitation. I had to prepare a draft report which was sent from Delhi to Seoul to establish diplomatic relations with Bangladesh. With my fountain pen, I signed a document for establishing diplomatic relations between the two nations.” - Former Secretary General of United Nations Ban Ki Moon.

Dr Abul Hasnat Milton is a Bangladeshi-born Australian author, academic, public health physician and social activist. Of his pursuits, writing and poetry are his passion, and he has published eleven books of poetry and three novels in Bengali.

He is a regular contributor to multiple Bangladeshi newspapers and writes on politics, health and literature.