Welcome to the Other Side!

Reclaiming Life After Surviving and Caregiving Through the Abyss of Cancer 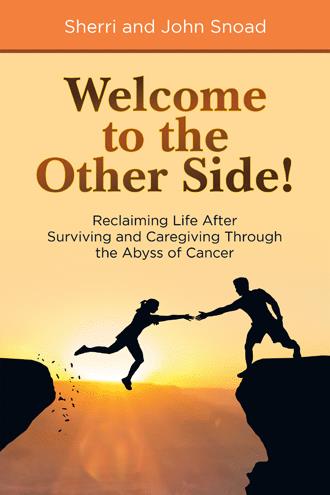 Have you ever looked at the same sculpture or work of art as someone else, but you each see something entirely different? If the cancer and recovery experience were a pair of eyeglasses that had to be shared, the patient-survivor and caregiver would be looking through two totally different lenses. Even though struggling through that abyss together, the experiences are quite different. Written in a dual narrative style, Welcome to the Other Side! will serve as your guide if you find yourself in the midst of a struggle with illness, providing takeaways from both uniquely different perspectives. This book does not shy away from the seldom discussed topics and obstacles you will face in survivorship, which often leave you feeling lost and alone. Topics such as intimacy and sex, socializing with others again, overcoming triggers that create paralyzing fear and anxiety, regaining independence from science and medicine, survivors’ guilt, or simply the the search for normalcy, are explored. Though these issues may not seem a priority during treatment, they will rapidly move to the forefront as you seek to find your new normal. Welcome to the Other Side! is filled with straight talk and humor, emotion and grace and provides a compassionate guide to crossing the stormy sea of recovery. The authors are blunt in sharing common experiences encountered by patient-survivors and caregivers. Whether read individually or with loved ones, you will find both perspectives engaging and enlightening all in this one literary work.

Sherri and John Snoad are ordinary people, unexpectedly blindsided and forever changed by an extraordinary event. As a healthcare provider for over thirty years, Sherri cared for patients during all stages of cancer, but never imagined that she herself would be diagnosed and become the patient. Her husband John never thought the skills he had spent a lifetime developing as an educator and coach would be tested as he was thrust unexpectedly into the role of caregiver. The difficult journey in navigating, and eventually finding a life after cancer is seldom talked about and serves as the inspiration for this book. Sherri and John strive to inspire those who may feel lost while trying to navigate their own labyrinth of cancer and recovery. They discovered that healing, and ultimately acceptance, could only begin from within through patience and open communication with each other. Sherri and John have not only moved on but have embraced their new normal. They are the proud parents of three adult sons and their growing families. Living by the mantra to “not let the grass grow under their feet”, you can find them somewhere in the great outdoors, hiking, enjoying the water or travelling as often as they can.