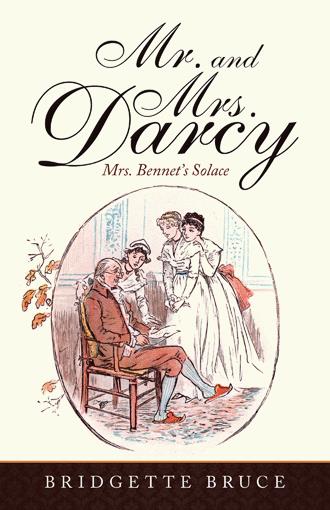 The wedding breakfast was enjoyed by all, Mrs Bennet serene at her table, certain that even Miss Bingley was impressed by it all. Her daughters looked as handsome as anyone had ever looked, her table was spread with every delicacy possible and the candles and flowers were as splendid as any fashionable table in town, in her new silver-gilt centrepieces, servants aplenty, her own and some from Netherfield to assist, and she had the supreme satisfaction that she had found not one but two wealthy men to join her family. Mr Bennet, in a more sombre fashion, was equally happy with disposing two of his daughters to two such kind, respectable gentlemen, who truly loved them. Mary was still in surprise at all the compliments she had received on her looks, from the large congregation, whom the grooms, brides and their maids had greeted at the end of the ceremony. Was it possible that she was not as plain as she felt? Had it simply been a question of her previous choice of dress and hair? She had much to ponder on, but in the meantime, she applied her stilted, by lack of practice, conversational skills to making polite wedding conversation with some of the other guests present at the table. She was fortunately placed between Jane and her Aunt Gardiner, both of them realising that she was making a great effort to be congenial and assisting her whenever possible, happy to help her out of her self-imposed shell. Kitty was in her element, having always been gregarious by following Lydia’s lead, but also having learned some valuable lessons on decorum from Jane and Lizzy, how much a young lady may say, and to refrain some vulgarisms of expression which had marked her previous manners.

As the Bennet sisters prepare to simultaneously marry their respective significant others in a simple ceremony, Lizzy begins laying the groundwork to assume her new role as Mrs. Darcy, mistress of Pemberley and Darcy House while Jane busily plans to become Mrs. Bingley. Amid the frenzied preparations, the sisters must find a way to carve out some semblence of independence while attending family dinners, purchasing wedding clothes, and dealing with their mother’s excessive boasting. When the big day finally arrives, the sisters travel to the church where Mary and Kitty await to assist them with their gowns and flowers as dutiful maids of honour. With Lizzy on her father’s left arm and Jane on the right arm, the young women walk down the aisle to marry their loves, enjoy a wedding breakfast, and open a ball at Netherfield. After Lizzy and Darcy move into Pemberley and Jane and Bingley set up residence at a nearby estate, now only time will tell where life will lead the sisters. In this imagined sequel to Pride and Prejudice, the fascinating story of Lizzy and Darcy continues, detailing their experiences both before and after they marry the love of their life.

Bridgette Bruce is a Jane Austen tragic who wishes her favourite author would have lived to write more. Her first novel, Mr. and Mrs. Darcy, is inspired by her curiosity as to how Lizzy and Darcy progressed in the future.