An Always-Present Guide to Your Divine Path 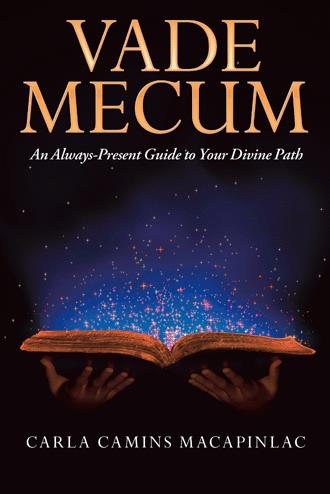 Introduction Vade mecum. It's a Latin term I had not come across until that Autumn day in 2003 when my friend, Anne, came over to my house. We spent an entire afternoon on the floor of my living room, preferring to sit on the couch cushions instead of the couches, drinking wine, and chatting nonstop. We talked about anything and everything – from the silly and mundane to the deep and philosophical. Anne casually asked me if I was familiar with the term. I replied that I was not, and in fact, had never heard of it before. She then began to tell me about her strange encounter with this arcane phrase on at least two separate occasions that she could remember. The first instance was in a dream. She had dreamt about a tall, thin man dressed in leather, with long black hair and a somewhat pale, goth look to him. The man approached her. She was a teenager in her dream and was afraid of the man because "he looked quite rough."The man held out his hand to her and said, "Vade mecum." Emblazoned on his palm was a symbol that began to glow. Anne does not remember what the symbol looked like, and these were the only details she could recall from the dream. Her second encounter with "vade mecum" was more perplexing. Several months, perhaps even a year or two later, Anne was standing outside a gym waiting for her boyfriend (now husband) to finish working out when a homeless man started talking to her. He was mostly muttering nonsense (Anne recalled him saying something about toothpaste). However, at one point, he looked her right in the eyes and said, "Vade mecum. Does that mean anything to you?" This is the extent of Anne's recollection of these two events. Now, these two incidents in themselves are enough to puzzle anyone. I certainly thought they were bizarre, and neither Anne nor I could find an explanation behind these occurrences. It was not uncommon for us to talk about strange dreams, sleep paralysis, astral travel, ghostly encounters, and other subjects in the realm of the mysterious. I was thirty-five years old at the time and had already had a few paranormal experiences in my life. Anne was one of the few people with whom I felt comfortable sharing such stories. I've revealed some of my unusual experiences to family members and friends over the years, partly because I needed to convince myself that I was not going crazy. Yet I never considered documenting these incidents, much less publishing even a fraction of them in a book for strangers to read (and possibly scoff at). What has compelled me to do so now is that Anne's experiences with "vade mecum" did not end there. On the contrary, that day was simply the beginning of a bizarre series of events that seemed to signal my deeper connection with Anne and this obscure Latin phrase. You see, the very evening after Anne told me these two stories, I sent her a message, incredulous at what I had found in my email inbox. Anne had left my house later in the afternoon; that evening, as I was reading my email, I opened my Word of the Day subscription. Although I had never previously encountered the term in my thirty-five years, suddenly there it was. Vade mecum. It was the Word of the Day on the same day Anne told me about her experiences. She was not aware of this until I sent her my message. Bizarre? Yes. Coincidence? Maybe. If that were the end of our "vade mecum" tale. However, in the sixteen years that have since passed, more odd encounters with "vade mecum" have transpired. Always in connection with Anne. And each one adding to the mystery. When I began writing this book, it was mainly a desire to chronicle this curious case and understand the meaning behind this and numerous other extraordinary experiences I have had throughout my life. Some of these have remained ever mysterious and unexplained for many years. Slowly, however, a purpose started to emerge as I discovered patterns connecting my stories. I realize now that this isn't merely a retelling of peculiar happenings. It's an invitation. An invitation for you to see what I see: the signs and all the different ways that the universe speaks to us. These are guideposts along our way. The truth is, we all have an always-present guide to our divine path. Our own vade mecum.

Ever feel like you missed a turn in the road? If you were given a magical handbook with your name on it, containing divinely generated guidance specifically for you, would you want to know what it contains? What if this guidebook is meant to help you live your best life? Through mystical yet true stories, practical examples, and tools, Vade Mecum will help you: • Understand that you are guided at all times, sometimes in unbelievably mysterious yet magical ways. • Realize that when you tap into this guidance, struggle and doubt become unnecessary. • Discover how to live your life on purpose and in flow. Never miss another turn in your road again. Open Vade Mecum and start your guided journey to live as your bold, best self.

Carla Camins Macapinlac, the founder of Vade Mecum, LLC, is an author, Reiki Master, and intuitive life coach for those seeking to follow their divine path. After a successful thirty-year career in healthcare, she walked away from the corporate world to embrace a deeper calling. Through group workshops, personal coaching, and energy healing, Carla uses her intuitive gifts to help others tap into their own intuitive guidance system and live as the bold architects of their lives.