Raelyn and the Final Dominion Seed 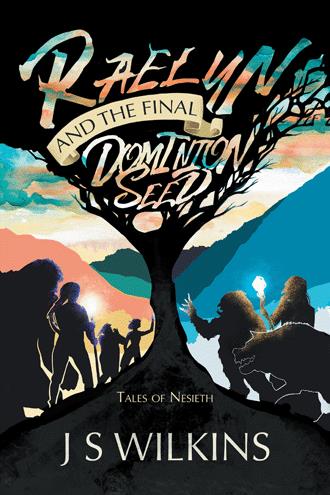 The rain was pouring in Black Forest, there was the occasional growl of thunder with flashes of lightning. It was warm but wet, with the smell of smoke and death all around. Slesley Greyroot, who happened to be the finest wizard in the land, was running for her life! Staff in hand she used it to light a purple path in front of her. It was slippy underfoot, several times she almost ended up face down in the dirt. Greyroot was running to where she knew she would be safe, where the good trolls lived. There were many caves in the land of Nesieth, these ones near the edge of the Black Forest were the target. There was one in particular that she was looking for, it was owned by a wise old troll, by the name of Mordrake. It had a waterfall that cascaded down near the entrance. If you didn’t know it was there you wouldn’t keep looking. That’s what Slesley was relying on, hoping her scent would be covered by the waterfall. From under her long navy cloak, in her backpack there was a mysterious white glow. Green foliage sticking out, rustling as she ran. A blast of a horn behind her signalled danger, bloodhounds barking in the distance. The hounds would be leading the Smurgs towards her (we will hear more about these disgusting creatures soon). Slesley Greyroot was fast, not as fast as some younger wizards but at 500 years old, fast enough to be able to put some distance between herself and the hounds. Jumping over roots and sliding under low branches, she made sure her precious cargo wasn’t damaged. Greyroot was as tall as your mum. Her peach skin glistened with each bolt of lightning. Her blue hair which she kept platted in a bobble, something her mum would always say about catching lice, shimmered in the moonlight. She left strands over her face, thought it made her look mysterious. Although most of the time it just annoyed her and got in the way! She wore grey three quarter length trousers, these were standard wizard wear in Mortooth (the wizard city). They were allowed the freedom to choose their tops and socks. So she had her ‘a human is for life not just for experiments’ t-shirt. Her socks were knee length yellow tartan, with all the running however, they were round her ankles. Sturdy footwear was always important, you never knew when you might be running from Smurgs. Greyroot crossed back and forth across the river before passing right through the waterfall. The water was bitterly cold, it chilled her to the bone. On the safe side of the waterfall she doubled over out of breath, her rib cage flexing to get as much oxygen in as possible. She didn’t want her 500 year old legs giving way underneath her. She had made it to the South-West side of Black Forest. _________ Holding her staff like a hairdryer she whispered an incantation “accelarit warmth” there was a purple glow, without heat radiating, her clothes were dry. As she hoped the lights were off in the cave. This meant that Mordrake was still hibernating, trolls did this for two months each year. Although some of the older ones still had to get up to use the loo. The Smurgs and bloodhounds wouldn’t get near the caves for fear of being eaten. There are many stories of trolls being woken from their sleep and being so hungry they have eaten two or three Smurgs in one sitting. The reason Slesley wasn’t worried was because they were just that, stories! Rumours used to protect the good trolls, allowing them to get some peace and quiet from working the land. Slesley took off her backpack and placed it in a crevice in the cave wall. It still had a white glow from what appeared to be a seed on the plant. She collapsed in a heap wrapping her cloak around her, she needed sleep first. But then she needed to find the one with ‘The Mark’.

Dominion seeds were sown across the land of Nesieth by the ancient giants. These seeds are what the linfets and the smurgs grow from, they are not born like you and I. Many peaceful generations have passed but a smurg uprising led by Captain Smudge and Muldus Whiff is threatening to disrupt the peace and upset the balance. Slesley Greyroot, the finest wizard in Nesieth finds herself battling against this tyranny, as she often has before. With her trusted friend, Mordrake, they must find The One to fulfill an ancient prophecy. Cover Artwork by Sarah Lawrence