You Can Create Your Potion to Feel Good for Life 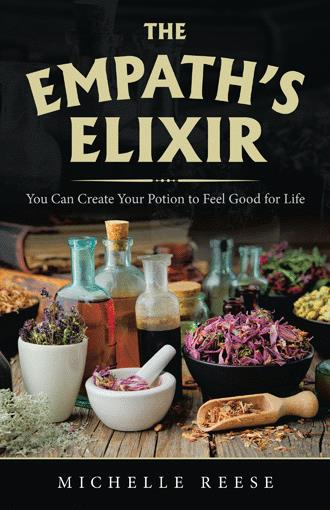 Empaths. People who see more, feel more and intuit more than others. Known for being deeply in tune with life and sensitive to energy, balanced empaths experience life in the deepest way; seeing the unseeable, sensing the little known, dreaming future events, or feeling the energy of the plants, animals or others around us. These are our superpowers. We empaths have known this about ourselves for generations. Modern science is catching up; research is beginning to show that our brains are more easily stimulated. It may often feel like a curse if you’re challenged with the superpowers you have. I like to look at this energetic sensitivity like the “Fantastic Four.” This fictional superhero team appeared in comic books published by Marvel Comics. The story goes that during an outer space test flight in an experimental rocket ship, a storm of cosmic rays bombarded the Fantastic Four. [Source: http://en.wikipedia.org/wiki/Fantastic_Four] Upon crash landing back to Earth, the four astronauts found themselves transformed with bizarre new abilities: Mister Fantastic, a scientific genius, can stretch, twist and re-shape his body to inhuman proportions – in any shape he needs. He’s the father figure and leader. Invisible Girl/Invisible Woman, can bend and manipulate light to render herself, and others, invisible. She later develops the ability to generate force fields, which she uses for a variety of defensive and offensive effects. The Human Torch possesses the ability to control fire, allowing him to project fire from his body, as well as generate the power to fly. The Thing transforms into a monstrous, craggy humanoid with orange, rock-like skin and super-strength. The Thing is often filled with anger, self-loathing and self-pity over his new existence. Eventually through his trials, he becomes "the most lovable group member: honest, direct and free of pretension.” The four became fantastic, not because they tried to pretend they didn’t have “bizarre new abilities.” They embrace these abilities, somewhat awkwardly at first, and then decide to use these powers for good as superheroes. It’s a “save the world” kind of thing. Fast forward to reality, we empaths have been blasted with superpowers that we are discovering. Perhaps we don’t trust ourselves yet, we are awkward at best, but really, what were we truly meant to do with these abilities? Were we meant to stay at home, cowering in our space because there is too much energy? Were we meant to not say what we really think, feel or intuit? Were we meant to feel alone - like outsiders, feeling like we don’t fit in? Were we meant to fear and avoid crowds like in shopping malls, sports events, and parties? Of course not. We were meant to shine that Empath light like no other. One of the biggest challenges we face in our lifetime will be to truly accept and love who we are 100 percent. I’ve made a lot of progress towards this 100% so far, and it will be a lifetime achievement for me. Perhaps it’s a lifetime achievement for all of us because the attributes we see in ourselves, we now accept on a level because we picked up this book. Not fully - yet. We may know that information a year or two ahead of time, we know that it’s coming because we’re sensing it, and we share it in unskilled ways that cause others to outright reject it; the way we do it alienates us from others. In fact, this happens automatically to us as children. We’ll blurt out, without judgement, that insight or information we saw. It was met with denial, skepticism, punishment, criticism, shame. The value of the information was lost. So many of us learned to deny our very essence and power so that we’d fit in, be accepted and not alone. What if we fully accepted ourselves. That means we know we have power in the information we receive. We know it may be way ahead of it’s time or on a level that others won’t see or understand. Even so, we validate it and accept it for ourselves as true, because of course we know it is. We don’t run out to the first person we see to validate it. Then we get curious about what we’re sensing. We take the time to reflect on what it means to us, and how to choose the next best action by considering the best people, places and events to share it with. The information gets disseminated effectively. This book is for Empaths that can’t accept how sensitive they are. They think that something is wrong with them because they’re so sensitive. Some days they have a hard time making it confidently through a day because of all they’re feeling. They wish they were not the way they are. Maybe they’ve struggled for years with their sensitivities. Maybe they’ve blocked them out at a deep level. And why wouldn’t they? There hasn’t been a playbook on how to be an empath. Most of us have learned from one place or another, or many places, that being an empath is not a positive trait. It feels like a curse. I wrote this book for you, for us. My hope is that I will empower you to embrace your sensitivity and the wonderful person that you are.

At the age of 16, a dark depression brought suicidal thoughts to young Michelle Prebilić. She wasn’t sure if this life was worth living. Life seemed hopeless and overwhelming. She felt lonely, scared, and confused - and deeply angry. Without skills and tools to see her way out, it seemed better just to end it all. Yet, through an unlikely series of events, Michelle made a commitment to create a new life story, one full of love for herself and self-care. She is passionate about empowering all Empaths, like herself, to fully love and accept themselves in the lifetime they’ve been given. And to take damn good care of themselves. This book is for you, Empaths.

Michelle’s education in psychology (B.A. in Social Psychology) and business (M.B.A. in Finance) created the perfect background for her to serve as a manager and consultant for several fortune 500 companies for over 25 years. She learned how to work with and motivate a variety of people in corporate America, to communicate clearly and to help others achieve their goals. Her communication and management skills continued to be developed as she went into running a small business for the last 11 years, where she has served as both a realtor and CFO of a design-build remodeling company she co-owns with her husband. In 2014, Michelle’s work took on a more internal nature, fueled by her discovery that she is an Empath. Since then, Michelle certified and licensed as a Louise Hay Heal Your Life Coach and Workshop Leader, completed Advanced Space Energy and Personal Energy Clearing Workshops annually, studied Chinese medicine, and certified as a Primal Health Coach through Mark Sisson’s Primal Health Program. She has figured out how to amp her self-care so that she feels strong and vibrant in her daily life, and is passionate about empowering Empaths to discover it for themselves. She’s been coaching and supporting Empaths, through Heal Your Life workshops, bookstudies, support groups,and energy clearing people and places for the last few years. This book is her first in a series of books for Empaths.