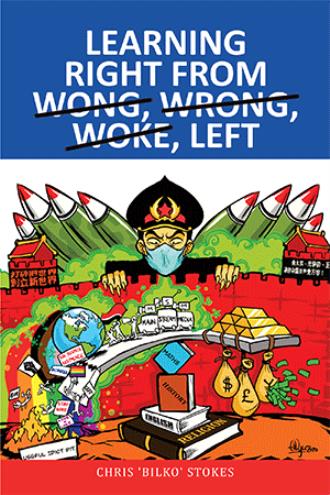 Wokeness even instils weakness into civilised life. Just look at socialist efforts to take competition out of our young in junior sporting contests. Rather than have winners or losers, our young will never learn the nature of combat and conflict, as they will be conditioned to participate rather than win or lose in sporting contests. Pride, passion and the "will to win" are currently being discouraged and eroded by the elitist lefties who wish to have equality for all. "It's not whether you win or lose, it's how you play the game." I am sure those sentiments were traditionally echoed by the "losers" in days gone by. Even academic achievement is being constrained, as the left seeks to ensure everyone achieves a minimum standard of education, rather than encouraging high achievers to maximise their potential. They wish for equality, to the point that they force companies to employ on gender quota rather than ability. Wokeness is even exerted on lending institutions to force them not to invest in industries such as mining which can be harmful to the environment. Common sense will tell you that if you do not grow the pie, there is less for everyone. The socialists are "planning to fail" in their indoctrination of society. Yes, our friends from the left are "a few cents short of the dollar" and certainly not "the sharpest tools in the shed." Therein, lies their weakness. "if it ain't broken, then don't fix it!" Socialism at first, is often faceless and can appear to be rudderless as it "bubbles away on the surface," But, "scratch the surface and look a little deeper." There is the old chestnut of that "lust for power" lurking just below the surface, exhibited by an elitist few. Leading progressive politicians, the power-seeking, lefty-aligned media and the social media technocrats are merely trying to subvert minds through wokeness to gain ascendancy at election time. They care not for the welfare of the masses. They seek to control them by giving them a voice and then ignoring them once they have the power or are in charge. As, with all narcissists, there is no discipline, just a desire to be on top through vilification and intimidation of opponents. This is no economic basis for the ongoing development of an ordered successful democratic society offered by the progressives. Just the incessant denunciation of all opposing views. Sound familiar? Recognise the sheer hypocrisy of the leftists as a sign of their deceit and insincere motives. One only has to look at the agitators of the global warming hoax. The elites have gotten rich out of peddling fake news about catastrophic heating of the earth and rising sea levels. The socialist elite are so concerned about this, that they purchase the most expensive waterside mansions possible. Can you "smell the rat?" "It is only a rort, if you are not in on it." While many get sucked in, thankfully, Western society does still have enough collective intelligence and the ability to rationalise and see through the veneer that is socialism. Indeed, the Chinese Communist Party while being an emerging global threat, is still plagued with dissatisfaction by the many oppressed inhabitants within the nation. While the West is wise to confront the Communist China, the application of maximum economic pressure on the regime through trade tariffs, should ultimately, see it turn on itself. The CCP will be met at borders but ultimately it will be defeated from within by natural socio-economic forces. At the end of the day, history has shown that just as socialism is about to achieve its "utopia," it slides into communism. Once totalitarian control of the people is reached, natural forces of human nature give rise to rebellion against the authoritative control over the people. It is in essence, a self-defeating philosophy. A common sense means of wealth redistribution that has been hijacked by leftist extremists, who seek power by preaching the need to uphold morality through equality. But once there is no wealth left to plunder, growing poverty and economic hardship within, sow the seeds of change.

Written with a hint of 'larrikinism' this book discusses the raging battle between left and right that has engulfed the free world. In a technology-driven world, being time poor and confronting massive rises in the cost of living, society has been pounded into submission by three life-changing events simultaneously. Climate change, the covid-19 pandemic and the death of George Floyd have taken the world and its globilised village to the edge of a precipice. Should it topple over due to an economic collapse or the rise of China, life as we know it will be irreversibly changed. How we deal with this calamity before us all, depends on our individual knowledge of and respect for socialism and capitalism. There has never been a more important time to know the differences between left and right, how these features got us to today, and how they can help us tomorrow. If the task before humankind all wasn't hard enough, we all have to contend with wokeness and a derangement within certain sections of the community. Who said "life wasn't meant to be easy."