by Cynthia A. Hart 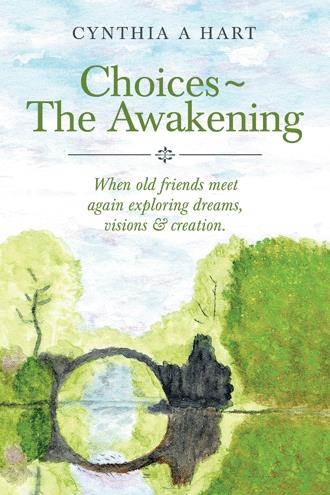 Rapidly another hour passed, and the group had pretty well discussed the most majestic plans that each committee could envision. Of course, these were not the final plans but just some suggestions or rather their wildest dreams for an enchanted evening. They all agreed that if the reunion was half as fabulous as some of the ideas, that it would undoubtably be the most incredible night perhaps in their lifetime. Next, they considered a theme for the night. Since their senior song was “Bridge Over Troubled Water,” Alex suggested an idea of finding or building a bridge to have their pictures taken on. Of course, he conjectured that the bridge would be fake and go from nowhere to nowhere, but as Gretchen reminded them, “Isn’t that the case with most bridges anyway? I mean you cross over the bridge and there you are.” “I guess you’re right,” replied Ben. “Do you suppose we could have the bridge going somewhere, rather than over troubled water, because I don’t know about y’all, but I’ve had enough troubled water to last a lifetime? I’m ready to go onto higher grounds.” Excitedly Audrey said, “Yeah, we can call the night The Bridge to…help me, the Bridge across…” Something struck Audrey on a deep level when she had a glimpse of the memories she had earlier. A wave of nausea washed through her and she swallowed especially hard to push back the thoughts that remained unresolved and horrifying. “The Bridge to the 21st Century,” Link said. “The Everlasting Bridge,” Joel replied. “The Perpetual Bridge,” Drake threw in. “The Mystical Bridge?” Gretchen interjected. Faith said, “The Endless Bridge?” “The Eternal Bridge,” Francine stated. “No, no, The Bridge to Immortality,” Link said. “The Bridge Across Destiny,” Ellie indicated. Audrey said in a joking manor, “The Bridge to Eternal Youth.” They laughed till the tears welled up in their eyes. Alex was the first to gain his composure and said, “I think we are really on to something here, that will be like one of the themes of our prom, but now that we are older it needs to have a deeper meaning.” “Yeah, I agree but the Bridge to WHAT?” Francine said. Mutuality everyone conferred but no one had an idea of where the bridge should lead and after a while the group decided that they would have to think about it for a couple of days to see if something perfect came to mind. In December they would all write down the word that best described the feeling, then vote on the phrase. ********************************** After handing the route to Bob, the owner of the truck, Joel paused as he noticed the sign someone had made and hung on the wooden slats. He thought the message, “We Wish You a Merry Christmas, from the Class of ‘73” was perfect. Just before he started to ask, who had the foresight to make this, he smiled, shrugged, and decided it really wasn’t important for him to know. He was the last to climb up into the planked bed of the oversized pick-up, filled with at least twenty-two bales of hay and thirty people, many of them his closest friends and their families. As he sat down beside Susan, his wife, an incredible joy filled the air and his soul. The smile that radiated from his mouth was only a small portion of the cheerful spirit that welled within his heart. “This moment,” he thought, “is about as close to heaven as one can get. Bob threw the old truck in gear and they rolled off into the night with delight as the first song rang out, “Dashing thro' the snow, In a one-horse open sleigh, O'er the hills we go, Laughing all the way;” The younger children had gathered on the floor and sang as loud as the adults, as if in competition with one another. When the truck began to slow down, everyone knew this was the house of their old principal, who retired twelve years ago and had lost his wife in April. Before long he appeared at the door with a cup of coffee and a book tucked under his arm. They were a good hundred yards from his porch, but they could see how moved he was, as he touched his heart with his right hand. It dawned on Kelly, that she needed to give him one of the invitations to the reunion and jumped up saying, “Here, here, we need to give him this!” before stopping in her tracks when she noticed how far down the ground was. Ben stood up and stepped over a few children as he offered, “Here, Kelly, let me.” Joel started the next song, “O come, all ye faithful, Joyful and triumphant, O come ye, O come ye to Bethlehem; Come and behold him,” echoed out and brought out a few of the neighbors. Bob had slipped out of the cab, removed his cap and began to join in with his deep baritone voice. Ben gave Mr. Bradshaw a long hug, as he shook his hand and said goodbye. When the song was over, Bob started the engine and as they rolled on, Mr. Bradshaw threw up his hand waving to the carolers, then blowing them a quick kiss. It stunned those who saw this jester; maybe it was the chilly night air breezing by, but tears gathered in the corner of nearly every eye. Not a soul said a word, about the thoughts they were having about this man they had passed in the halls a thousand times or had to face when you had screwed up badly and how out of character this was for him.

Life is a series of synchronicities that these everyday people become aware of each time they gather. They go beyond questioning why they are here; to a much deeper awareness of living in a still small town in Virginia, in an ever-changing world in the early 90’s. On the surface, they are just going about their business, until some rather strange things start to happen. It is no different than what most of us experience when we pause, long enough, to explore our feelings, talk about them with a close friend and remain on the lookout for the next one. Once they really begin to examine these events, they start to remember all the things they forgot they knew.

Cynthia A Hart has worn many hats in her lifetime, but loves being Grandmother most of all. She is also an Ontologist, an Investor, Writer and Political activist that believes in peace and the search for Truth. She will tell you that she’s the most curious person she knows and is very passionate about all things related to the Spirit. At moments she can almost remember before time and matter mattered on this journey of expressing the unexplained. She discovered that traveling in her younger years, only made her homesick and that seeking to understand our inner aspects were more of an adventure than any foreign land. Currently she lives in a cabin with Jade and Rumie in the woods on Spring Hill, just north of Atlanta where she continues to push outer parameters and literary boundaries.