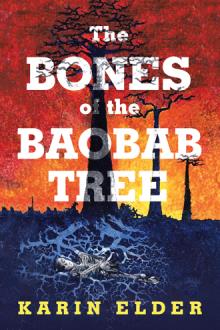 The Bones of the Baobab Tree
Karin Elder
$19.76

The historical heart of the novel set in 15th Century Ireland, is framed through the fresh eyes of Kelly, an ordinary woman who runs a café in Banbridge, County Down. Down to earth, deeply religious, the community turn to her in times of need.

Kelly has been troubled by dreams of a time gone by. Her son, when he starts to speak, recites names from her visions. Distressed, Kelly turns to a hypnotherapist, and all is revealed. Those she is close to today happen to be the souls that joined her in her life as Maire. She realizes she is here, now, in this life to give back to those who fought alongside her. That the love from her heart and her food is her thanks to them. Sustaining those that once sustained her. Is she delusional, or is this reality?

Long ago a girl was born to rule a Sept in Fermanagh, Ireland. Brought up with a sweet and delicate childhood, everything changed upon turning twelve, where upon her father gave her empowering gifts.

Maire O’ Ciaragain her beloved stallion, a tamed buzzard, her father’s Druid and Ivan- a mountain of a man; embark on journeys into the other realms and combative challenges which forge her unbreakable resolve. Others join in Maire‘s cause in Armagh, they form an enviable force of destruction and revenge. Their goal: to rid Ireland of the cruel and oppressive English Earls.

Maire leads her clansmen into revolt and shrinks The Pale, even killing the father of her young child without guilt. All that cross Maire come to a dastardly end. She gains a notorious reputation and a respect by the British for never taking prisoners.

After other skirmishes, a time of quiet arises over the land. Until an attempt to kill her supernatural animal companions is somewhat thwarted. The perpetrators meet a grisly firestorm. Peace reigns.