Create the Image You Desire a 14-Session Speaking Seminar

by Gail A. Cassidy 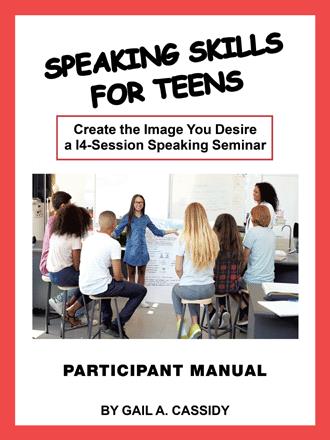 Dear Speaking and Imaging Participant, I am so delighted you are taking this program! Congratulations on your decision. I assure you, you will not be sorry--nervous on occasion perhaps, but not sorry. Of all the courses I have taught in the public, private, and corporate sectors, this is by far my favorite. Many years ago, I read the story about Mark Edlund, a young man who lost his life in Vietnam. When his special effects were returned to his parents, they found a yellowed, crisply folded paper in his wallet. He had carried it with him since 7th grade. That one day so many years ago, his teacher asked the class to write the names of every student in class on the left side of the paper. She then asked them to write one good thing about that person next to their name. That weekend, she took everyone’s lists and made each student a copy of all of the good things their classmates had written about them. Mark Edlund had kept that paper with him all of these years as had many of his classmates who attended his funeral. That story is significant because of the impact those words had on this young man and his classmates. These weeks will have a similar impact on you. At the end of the course, each student will receive all of the positive comments from fellow students about every talk he or she had given. Compared to physics or Spanish or some other course, this program will indeed seem easy; however, you will learn far more than speaking skills. You will experience an entirely different outlook on life--on who is responsible for how you feel, how you act, how you react. You will learn to see people differently. You will learn how to “read” people and become aware of how you are “read.” You will learn how to use your voice to produce the greatest effect. In other words, you will have the opportunity to mold yourself as you want to be. While you may eventually forget facts and figures learned elsewhere, you will undoubtedly retain much of what you master in this seminar, because you will have constant opportunities to be on your feet and apply those things you have learned. You will also have many opportunities to laugh, cry, and genuinely feel good. Let me share with you the essence of one testimonial I received from a very bright, articulate young lady who was a naturally good speaker when she began the class. She stated that she felt this course had done much more for her than she had ever expected. She said it had not just made her a better speaker, but it had made her a better person overall. She said she now feels more confident in her skills to relate to other people on a daily basis. She said she would recommend this class to everyone because the lessons they will learn they will carry with them throughout their lives. She went on to say that she never would have thought that she would get this much from a class where she could talk a lot and there was no final exam. (Correction: there is a final exam, but it’s one for which you can easily prepare.) She said that the final and probably most important skill that she had learned in class was to only look for the positives in people. She said that picking out the good in people instead of bad has become second nature to her. She stated that this skill not only makes other people feel better, but it also reflects itself on her own disposition. When a person learns to see the positive in other people, it brings a much more peaceful, optimistic outlook to the rest of the world around them. Another testimonial is quite different. This came from a very quiet, shy gal who was barely audible when she first addressed the class. Watching her with her head bowed and her eyes on the floor, I feared I had a real challenge ahead of me. I should not have worried, however, because her peers provided her with the support and validation that buoyed her and literally transformed her into an extremely effective speaker--one who touched our hearts with her words. This young lady said that this Speaking class was the first class in school that she felt she actually got something out of it. She stated there were no words to explain how she loved it. She used to despise talking in front of the class. Now she views that prospect as a way to speak her mind freely. She said she felt that this class showed her a whole new level of confidence she never knew she had. Even though she would get nervous before her talks, she would get this feeling of excitement when she went to talk in front of the class. She also stated that this is the first time she actually liked going to a class in school. This class also gave her an idea of what she wanted to do as a career. Not only did she learn how to talk effectively, she learned that she is a strong, confident, and unique individual. She realized this through hearing the reactions of her peers. She was so appreciative of lessons she learned about life. You will find that you will probably fall somewhere in-between these two examples, and that is fine. Just practice your talks and enjoy each and every day of the class. Good luck and have fun!! Gail A. Cassidy 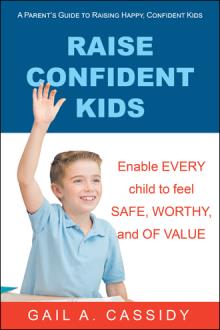 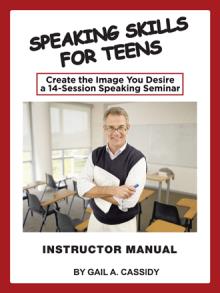 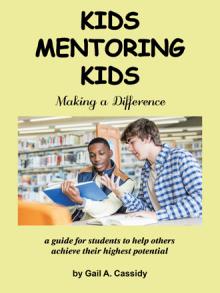 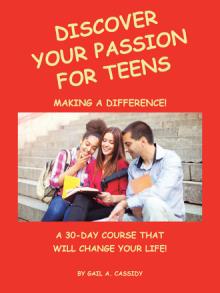 Discover Your Passion for Teens
Gail A. Cassidy
$13.99

Through positive responses to each classmate’s talk, students impact their fellow participants in ways that last for years. Speaking Skills for Teens trains students to be effective speakers. These skills also motivate students to view themselves and their classmates in a respectful manner. Because they can find only positives in each talk given by their peers, that is the way they start viewing each presenter even before the talk begins. Through active participation, students learn how to maximize their speaking skills, their poise, and their recognition of their own skills and abilities. In addition to learning actual skills—openings, evidence, closings, body language, and attitude training, participants learn how to use their voice to produce the greatest effect. They have the opportunity to practice being as they would like to be. Participants will learn far more than speaking skills. They learn to how take responsibility for how they feel, act, react. The training allows them to see people in a more positive manner. They learn how to “read” people and become aware of how they themselves are “read.” Students evaluate every speaker in writing immediately after their talk. Only positive comments are allowed—for substance, delivery, or impact. The teacher writes an area for improvement on a card and adds a positive statement immediately after each talk that only the speaker sees. At the end of the course, each student receives the evaluations from every classmate. While participants may eventually forget facts and figures learned elsewhere, they will retain much of what they master in this course, because they will have constant opportunities to be on their feet and institute that which they have learned. They will also have many opportunities to laugh, cry, and genuinely feel good—perhaps the greatest way to solidify their learning!

A personal coach since the late 90’s and founder of Tomlyn Publications, Gail Cassidy started her career as a high school English teacher, worked for IBM as an instructor/manager/writer where she received the prestigious “Outstanding Contribution” award for her self-paced training program that was used world-wide. She then worked for an international training organization as an instructor and manager of instruction. She has written over 20 books related to education and personal development skills. Her current focus is on providing high school courses that guarantee acceptance and validation for every student. As a result of her many years of volunteer efforts in her community, she was recently inducted into her town’s Hall of Fame.