one with the One

How Suffering Taught That We are Eternal and are Loved 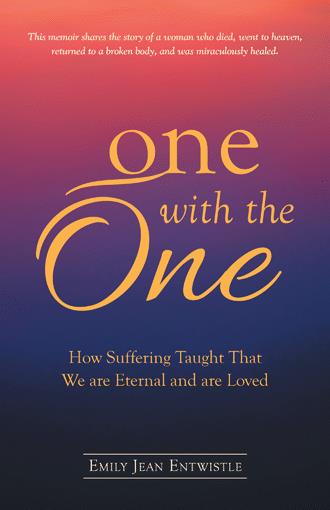 Emily Jean Entwistle, a former executive and material girl with a mystical bent, was badly damaged by a childhood rife with sexual and psychological abuse. In one with the One, she shares a story of transformation because of a soul level agreement to evolve through suffering into wholeness and joy. Entwistle chronicles her path to wholeness, offering details of her life. She was adopted into a frightening home and was a virtual prisoner until age eighteen. She was to die and go to heaven just when she reached tenuous stability as an adult. She returned from heaven, back to her broken body for the sake of another and was taught through service that the greatest law of life is love. In this memoir, she tells how conscious communion with God can be experienced by anyone. While her story illustrates how this happened to her, it offers guidance on how others can experience this, too. Through her trials and triumphs, Entwistle has learned that we are eternal beings floating in a sea of love. Her journey from darkness to light teaches the truth that we are co-creators being led back, with the greatest love of all, to conscious communion with God.

Emily Jean Entwistle was once a successful executive until a brain stem stroke and blood cancer at forty-three took her on a twenty-four-year-journey. Now, sixty-seven, Entwistle shares life with her love, Jonathan, and their sweet little cat. They divide their time between their home in the mountains and a primitive ranch in the wilderness.