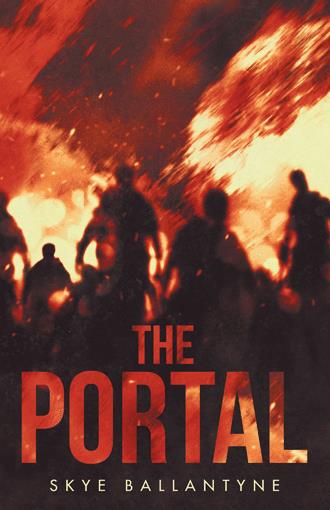 The room had seemed large at the time, but then again, he had been a child, everything had felt large. In reality, the room had probably been fairly small. No bigger than the living room in Cara’s cottage. Hunter had been sitting on the worn out brown rug in front of the fire, playing with some wooden toys. His mother had been sitting nearby, rocking his sister to sleep in the cherry wood rocking chair that Pete and Leana had given to her as a present when he had been born. Hunter remembered sharing his truck with Felicia, and glancing up at his father, who had smiled down approvingly at the sight. He remembered feeling so proud of himself at that moment. They were all laughing, and having a great time. There was no clue that his entire life was about to be turned upside-down. In a blink of an eye, the door of the cottage flew open. A man staggered in. He was covered from head to foot in soot. His left arm was pressed up against his stomach to stem off the bleeding that was coming from a wound. It was a pointless endeavor. Too much damage had been done. Too much blood had been lost. His end was near. “The town, it’s burning,” the man gasped, “They’re destroying everything,” the last of the man’s strength ebbed out of him, and he fell to the ground, never to move again. Mara hurried toward the man’s dead body and placed a hand at his neck, checking for a pulse, even though she knew that it was another pointless endeavor. He was gone. Tears rushed to her eyes, but she refused to let them fall. Instead, she pursed her lips together tightly. Not knowing what was going on, Hunter and Felicia had toddled over to the body and began to try to get the man to play. “Papa,” Felicia said, patting his shoulder, trying to get him to sit up and grab her, and tickle her, “Papa,” she said more forcefully, when the first time elicited no response. Cara had moved quickly, swooping Felicia into her arms and walking away from Felicia’s father. Coming out of his stupor, Hunter’s father did the same with Hunter. Hunter could still feel the tickling of his father’s black-beard. He could still smell the smell of the outdoors that seemed to cling to his father’s body. He could still recall how his father’s green eyes twinkled with delight in everything his son did. He was truly the apple of his father’s eye, even though Janette had everyone else, including his father, wrapped around her little finger, unable to do no wrong. With each of the kids safely in an adult’s arms, the group sprinted for the portal. They had to get the kids to safety. They never made it. Halfway to the entrance, Hunter’s father had realized it was an exercise in futility. He stopped abruptly, causing Pete to stop as well. No words had to be spoken. Hunter’s father simply passed his son over to Pete. Hunter remembered thinking how different Pete looked compared to his father, with a clean shaven baby face instead of a face with whiskers, deep blue eyes instead of green, that didn’t seem to twinkle nearly as much as his father’s did. Hunter cocked his head to the side, confused at the transition. He was even more confused when his mother passed Janette over to Leanna. Hunter fought to be turned loose. Pete gratefully placed the squirming child down. “Be a good boy,” Hunter’s father said, kneeling down in front of his son and placing a heavy, but loving hand on Hunter’s shoulder, “Take care of your sister.” Still confused, Hunter found his hand being taken up by Pete as he was led forward, leaving his parents to fall further and further behind. He stared at his parents, and while he did so, he saw his father fall to the ground, an arrow in his back. The shock of his father falling like his uncle had, caused Hunter to lose hold of Pete’s hand. As he stared, he saw his mother get taken away by someone he later learned was called Mintus. He remembered tears falling down his face. He cried, for his parents, at being lost, tired, and confused. As he cried the smoke burned his eyes and lungs, but he didn’t move. He didn’t know where to go. At some point, a beautiful lady swooped him into her arms and took him to Mara. He remembered being taken to the castle, and told to play with his cousin. For what seemed like an eternity to him, he was forced to stay with his cousin, under the watchful eye of Carl’s mother. Finally, Mara was taking him to a little cottage. Cara stepped out of the cottage with a smile, and the two women kneeled down beside him. “This is Cara,” Mara said, “You know Cara,” Hunter nodded. He knew Cara. He had spent time with her. She often watched him when his parents couldn’t, “She’s going to be your new mommy.” “No,” he said in the defiant way only a two year old could pull off. “She was a friend of your parents, and they want you to go with her, okay?” Hunter sulked but in the end, he allowed Cara to lead him inside. True to Mara’s words, Cara had taken him in, taken care of him, and had in fact become his new mommy. Hunter woke in a cold sweat as the words ‘I’m the victim,’ rang through his head. Those three little words had the power to make him question everything he remembered about that night.

As a child, Hunter's world was torn apart by Flara and her men. With his world flung into chaos and his family torn apart, Hunter vows to himself that he will make Flara pay for what she has done. Years later, Hunter has made himself into his village's best spy and soldier, taking on their hardest missions, and is now ready to make good on his vow. He will make Flara pay. However, a recon mission in the woods has unforseen consequences, causing Hunter's world to once again be turned upside down. Will Hunter be able to survive this new upheaval?