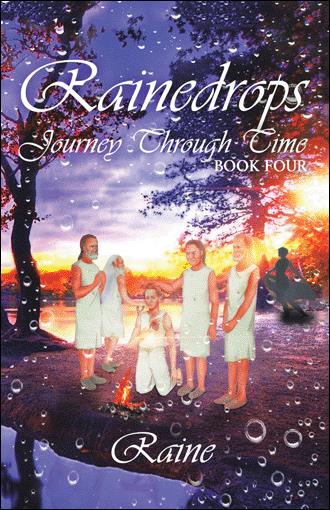 Drexania had given Arendia the gift of forgetfulness and to Arendia they were in a beautiful room to celebrate their wedding vows and they had their whole future ahead of them. It was the kindest gift he could give her knowing what tomorrow would bring and he would walk beside her the next day letting her believe all was well. Whilst all the time his heart was breaking and his grief all but engulfing him, but he had made a pact with his King and he would honor it. No matter what the cost to himself. It was part of his giving back to himan-kind those things he once denied them of all those many years ago in his younger years. Another knock came at the door and it was a beautiful cart covered with flowers and different meats, vegetables and fruits cut up finely for the lovers to enjoy together, thos last meal done by the cook with all the respect and love she felt for Drexania and all he had done to make their lives happier. Word had gotten around and out of respect for Drexania the villagers all agreed not to attend the women’s beheading. The couple sat down to dine, often feeding each other, laughing at times and just enjoying each other's company. Finally, the candles began to burn low and Drexania took his sweetheart in his arms and said “it is time for bed my beautiful bride, I would behold you this eve and bring you great joy.” Arendia began to undress but he said “No, let me,” and he helped her to undress so he could look one last time on her loveliness. She in turn undressed Drexania and she truly believed that the bed they turned to was indeed their wedding bed and she knew nothing but joy and happiness on this very most special night. Drexania had promised himself he would make her last night memorable for both of them and that she would have no idea of what waited for her the next day. They spent a wonderful evening exploring each other's bodies, talking, laughing, loving and at times even weeping with the joy of togetherness. Not once did Arendia have any inkling that something was wrong. The morning came oh too quickly, and after they washed and dressed the drums started to beat announcing to the populace that it was time for the execution. Drexania knew it was time. Offering Arendia his arm; he suggested they take a stroll in the beautiful sunlight outside. If they were fortunate, they might spy some jaybird along the way. Arendia placed her hand on his arm as they walked away from the Guard House and followed Drexania as he walked down the lane that was lined both sides with guards, to the block where the Executioner was waiting. Drexania's spells were working so well that they easily chatted as they walked, and she was totally unaware of her surroundings. When the reached the Executioner Drexania said to his love"Oh look, over there, see the jaybird playing amongst the bushes?” “Oh, oh where are they? I cannot see them,” answered Arendia. “Oh I know just gently kneel down, here use my jacket to kneel on and place your head on this wooden stool and you will be looking straight at the jaybird.” Arendia happily knelt at the ‘wooden stool' placing her head upon it and looked for the jaybird. “I cannot see them my love,” said Arendia. “You have to be very still and look very closely, and I promise you will see them,” and with that Drexania stepped aside and nodded to the Executioner who swiftly dispatched off her head. Drexania stood silent tly inside of the Guard House all by himself. It was one place he knew he would not be disturbed. His heart was breaking. He felt he had betrayed Arendia and yet he knew he had made her last night one of joy, instead of fear, and she knew nothing of her execution. Tears fell down his cheeks as his heart throbbed with such pain. Two years, two years of servitude to his King was what last night had cost him, he would have given ten if it had been aske?? of him, but his King did not know that. Two years was nothing to pay penance for what his night of illusion cost him to make Arendis's death freely given in her world of fantasy. Then he felt it, he felt the gentle wind against his cheek, he felt it go right through him and he heard her gentle voice. “I am with you Drexania. I am always with you. I am with you" Drexania cried even more tears but this time they were tears of joy, she was there just as she had promised him, she had always been there. She was the only mother he had known, and he loved her with all his heart.Knowing she was there he knew he could face anything, and holding his head up high he left the Guard House and entered the Keep knowing that those around him were showing deference to him in honor of what he had done. He even noticed tears being shed for him for so loved was Drexania by all. 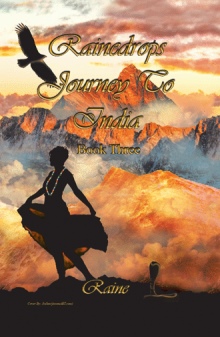 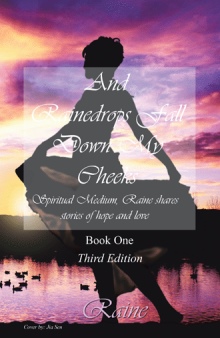 And Rainedrops Fall Down My Cheeks
Raine & Cover design or artwork by Jia Sen
$11.99 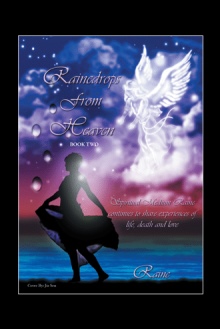 This channeled tale will open your heart and help you find your soul! Drexania, born to a young slave, finds himself left on the doorstep of a powerful Sorceress. Guided by his inner moral code, Drexania’s connectedness of ‘one with all’ leads him through a hermit’s life to living in a castle. War comes and with it mercy, in ways you can’t imagine! Drexania’s sleep, disturbed by ethereal beings calling him home. Where is home? Why do they call him? What awaits him? Will Drexania give up his lifestyle, and all those he loves to find out why he is called? What will Drexania do?

Raine has now written book four in the Rainedrops Series and whilst each book stands alone, feedback from readers show that the books are most enjoyed when read in sequence. Raine utilises all her eggs in one basket: Author, Spiritual Seer, Minister of Metaphysics, Masters in Metaphysics, Dream Councellor, Osteopath, Cranial Sacral Therapist, Clinical Hypnotherapy & Counselling, Aromatherapist, Therapeutic Massage, Marriage Celebrant, Funeral Celebrant, Pet Memorials, Name Giving/Baptisimal Celebrant to name a few. Raine has travelled the world several times and visited numerous Castles and memorable Cathedrals extensively throughout the world both by land and sea!