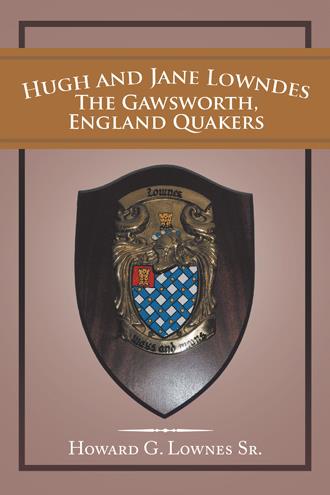 This is the story of Hugh and Jane Lowndes and the descendants that followed. Charlotte Lownes Olewiler’s writings had a lot of descriptive stories of those early years that followed down the family tree to her generation, with little information on the outreaching branches. In this book, I will be extending the family with as many stories as I can obtain about the other branches that Charlotte didn’t cover. I have also copied parts of Charlotte’s work to provide a complete story for future generations. Since Charlotte spent time in England back in the 1970s, her descriptive stories are included. This has the blessing of both Suzan and Conny, two of Charlotte’s daughters who have informed the other four siblings regarding the inclution of her words. There are some descriptive passages of George Fox and William Penn’s trials in England that tell the hardship of what those early Quakers experienced, as well as our beloved Hugh and Jane preaching the Quaker religion and knowing that incarceration was part of what they endured as they continued in their belief of God and freedom of religion in England back in the 1600s. The story of our ancestors is broken down into various sections to have a complete story, without causing confusion between the two main branches of the family. As we have been told and found documentation, Hugh died in prison in England, and later that same year, his wife Jane sailed to America with their four children. There were three sons and a daughter. As you will note, one son died within several years after arrival, and the daughter was hard to trace so, I will concentrate on the two remaining sons. We start in England using Charlotte’s work that gives a good understanding of their lives as they started out together. In the appendix there is a list of all the members of the Lownes famly that served in the military, despite the fact that as Quakers, of the early members, they were against military service. At the end of the book, there is a document showing names and dates of the members in tree form from generation one through generations fifteen. They are noted as (G 1) on through to (G 15). There may be more names and dates that I haven’t been able to locate at this writing, but to the best of my knowledge, it is as complete as I have found. The information has come from many sources, ancestry. com, Quaker Monthly Meeting that has been posted on the internet, the Springfield Historical Museum, the Swathmore Historical Museum and Library, the Historical Museum of Montgomery County, Pennsylvania, and family and friends as noted in the preface. From My Heritage Lowndes Meaning and Origin. English: patronymic from Lown. There are two possible sources for the name: the first and most generally applicable being from the medieval name “Lovin.” This derives from the Old English preceding the seventh century: Leofhun, which is composed of the elements “Leof,” meaning “dear beloved” then “hun” meaning “bear cub.” The second source is a habitation name from the city of Louvain in Belgium (Flemish name Leuven).” Habitation names were often given to those who left their original residence and went to live or work in another village or town or, possibly in this case, country. There has been some indication of the name datimg back to the eleventh century; however, this has not been verified, I did find a few names and dates as early as the fourteenth century.. Since Hugh Lowndes and his wife Jane Lowndes followed George Fox and the Religious Society of Friends in its early stages, you will see how they suffered and persisted in their belief in God and our Lord Jesus Christ and how it impacted their lives and the hardships they suffered.

The story is about a couple in England that were Quakers and prosecuted numerous times while preaching. Then after paying the fine to be released went back to preaching again.

Howard is telling a story of his ancestors.