An Around-the-World Journey of Inner and Outer Discovery 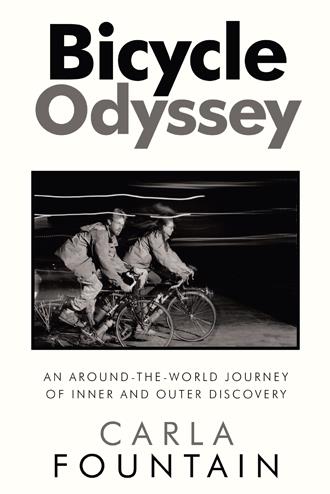 When author Carla Fountain set off on her year-long cycling journey, she expected new discoveries about the world. But she hadn’t anticipated a shocking rediscovery of herself. Bicycle Odyssey, a travel memoir, follows Carla and her husband, Dermot, as they embark on a challenging bicycling adventure that not only tests their survival skills, but ultimately their relationship. Armed with a will to persevere, they face unexpected danger and a cultural learning curve that nearly costs one of them their lives. In a time before modern conveniences, these two travelers off the beaten path lived disconnected from all communication. No cell phones to call home. No ATM for quick cash. No internet cafes to send a message. Relying solely on themselves, and a few helpful angels along the way, they experienced the lush beauty of Uganda, the welcoming people of Vietnam, the isolated mountains and hill tribes of Thailand, the terror of traffic in India, and the magic of Bali. Their journey did not end the moment they stepped foot at home. In fact, it continued for almost three decades as the couple digested the trip and acted on the lessons they learned. By telling their story, they hope to inspire and give confidence to others in pursuing dreams. Told with vivid observation about the world and the people in it, Bicycle Odyssey shares the story of a rich and enlightening pilgrimage.

Carla Fountain worked in film production and editing, taught elementary school, and has been a massage therapist and yoga/meditation teacher for the past twenty years. As an avid traveler and student of culture and languages, she has traveled the world extensively, both on and off of a bicycle. Currently, she divides her time between France and California.