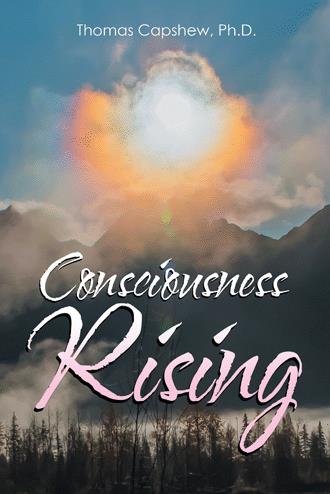 Consciousness Consciousness is undefinable because it pervades all of existence. It is the unseen fabric from which the seen world is made. It is the cloth from which we are cut. Consciousness existed before the big bang, exists through the life span of the universe, and will continue to exist beyond the life span of the universe. Consciousness is beyond space and beyond time: it is the eternal now, the ubiquitous here. As humans, we experience Consciousness as a force we label “Love.” Love brings light and life to the material plane. Love creates an oak tree out of the emergent properties of an acorn. Love creates a strong, loving, competent, and creative woman out of the emergent properties of an infant. Love creates a planet that provides for the basic life needs of the plants and animals living on it. Love creates the conditions for any life to thrive and live into the potential gifted to it by the life-giving source we can label Consciousness. Consciousness creates everything, from the simple building blocks in the material world to the most complex systems investigated by humans, including the human body and nervous system, ecosystems working in harmony, and solar systems and galaxies. As far as the eye can see—both unaided and aided, and as far as humans can imagine and beyond—has been created and is maintained by Consciousness. Humans are both embedded in and pervaded with Consciousness. Compared to the rest of the seen world, humans are currently at the most dissonance with Consciousness. As humans with a limited and limiting brain, none of us can have a complete or comprehensive view or understanding of the depth and breadth of Consciousness. All religions proposed or espoused by humans are but a grain of sand on the beach of Consciousness. All religious claims of exclusive access to Consciousness are false statements of human ego. True religion invites its followers into the mystery of being a grain of sand on the beach of Consciousness, first recognizing that the grain is part of the essence of the beach and then expanding awareness to realize that everything else is part of the beach. Everything. Including other grains of sand near and far, larger and smaller, lighter and darker. Everything. Including the driftwood and other dead and live plant life, shells and other dead and live animal life, and the water, earth, air, light, ambient temperatures and other elemental forces that bring, deposit, and break down the substances that keep the beach alive. Just as one human cannot assert in truth that they are the only human alive, one religion cannot assert in truth that it is the only path to knowing the Creative Force of the Universe. All of the collective violence in human history can be seen in its proper context as grains of sand fighting over claims of being the beach or fighting from the illusion created by fear that there is a limited supply of resources on the beach. Humans create dissonance from Love by energizing fear. Fear has many faces—the face of lack, the face of powerlessness, the face of danger, the face of death. And all the faces of fear are illusions. There is no lack, there is no powerlessness, there is no danger, and there is no death. Consciousness creates everything. Consciousness is the source of all power. Danger only exists in a truncated view of existence. Death only exists in a truncated view of existence. When human consciousness rises to a higher level, approaching the all-pervading Consciousness, the wider expanse of existence comes into view, and both danger and death lose their significance because they become part of the ever-changing manifestation of Consciousness of which we are all a part. Human Consciousness Humans are manifestations of Consciousness, just as is everything else in the seen world. Humans have created dissonance in the seen world by seeing themselves as individuals and then using that misperception for individual gain. Our history has been that many of us first misperceive reality and then live our entire lives out of that misperception, never knowing or examining the underlying misperception. We have generated and perpetuated a collective delusion that we are individuals, unconnected to everything else unless we choose to be. The truth is we may have individual aspects of Consciousness within our orbit and control, but we are always inextricably connected to all that is. Our brains, the largest and most complex nervous system we know of, have been trained over millennia to perpetuate this misperception of individual existence by making the seen world primary over the unseen world. Our heart, the seat of our human consciousness, is where we experience the unseen world. As we have pushed further and further into the astounding capabilities of the human brain, we have become infatuated with its abilities and potential. This infatuation with the brain has turned our focus away from the even more astounding capabilities of the human heart. It is as if we are so focused on how big we can build our computer, ignoring the potential of connecting to the internet to access more resources than we could ever hold in our individual hard drives. We fight over a scrap of meat like ravenous dogs, not realizing that there is plenty for all just beyond our awareness.

Consciousness Rising provides hope for the future of humankind. Thomas Capshew outlines a roadmap and vision of what our lives and world will be like when we become the Love we were created to be. Working from the premise that humans emanate from our common Creator, Capshew describes ways we have found value in each other that come up short. Over millennia, this practice has created and normalized a shared “dominator consciousness,” devaluing other humans to seek survival through wealth and power: power over. We have been living under this illusion, sapping our potential. Capshew defines the intelligence that created the universe as “Consciousness” and the energy used by Consciousness to conceive and maintain the seen world as “Love”. The author emphasizes that our Creator designs us with inherent value. Consciousness creates power with. Power with creates harmony with our Creator and with each other. When in harmony, our heart directs our life, aligning us with our inherent passion and purpose for living. Finally, Capshew illuminates ways to create a collective human consciousness that works for all people and our planet to provide conditions for life to thrive. Consciousness is rising. Consciousness has provided within us and around us the resources we need to become the Love we were created to be. As we clear the wounds of our individual and collective past, we cannot help but join Consciousness rising.

Thomas Capshew, PhD, works in the field of human potential. He supports the growth and expansion of individual and collective human consciousness. Some of his primary tools include psychotherapy, meditation, energy work, hypnosis, shamanic practices, and spiritual mentoring. In addition to this book, he is the author of Divine Warrior Training. For a free meditation download and more information, please visit his website at www.thomascapshew.com. He lives in Fredericksburg, Virginia, with his wife and sixteen paws and is happy to have successfully launched five children into adulthood. He loves the outdoors, photography, and music.