The girl from Gliese 581d 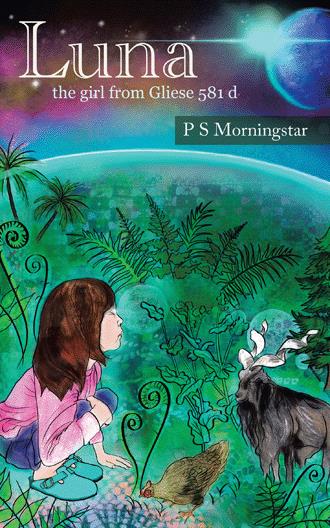 Luna hopped out of bed, so excited… today is the day! She could hardly sleep last night in anticipation. She was finally going to see real sunlight! The experience of a lifetime and she was going to be able to “take it all in.” Luna really didn’t know what to expect; except this was a very extraordinarily special day. She decided to dress for the occasion by pulling out and donning her “Ceremonies” outfit. She felt that was befitting of this day of “Sunshine.” Mum hadn’t called her for breakfast yet, so she sat on the end of her bed, swinging her little feet to release the excited energy she had and started thinking about all she had studied and knew of the Sun. Luna wasn’t born when this Outpost was targeted, planned reached and built. This colony had successfully thrived for over 3 generations now, and she was part of the upcoming fourth generation. As a tiny child she always asked “why?” this or that- No one responded to her internal nagging questions of wanting to know… Why? Everyone who lived here had a position or job to which their education was tailored. To her- it seemed well and good. In her heart she knew and had researched that her home was the “Blue Planet,” earth. From the time she was allowed in the Data Storage & Archival Studies Building, she would go there and check in with her tiny fingerprint and start looking. Looking for anything that would help her understand and learn about Outpost 621 and Earth. There were only 3 books at the Data Storage facility and Luna marveled at these, wanting to touch and hold them. What was in their secreted interiors? But that was strictly forbidden to everyone. All data- past, present, as well as projections was recorded for viewing on any one of the computer templates. It took some years of reading, rereading and assimilating for Luna to understand that this project started over 200 years ago on earth, when various visionaries, humanitarians, astronomers, botanists, economists, and programmers came together and started the 621project. They asked for 200 volunteers from all walks of life with varying skill sets for this commission. Their lives would be changed-there was no turning back if they accepted this undertaking. This statement always excited Luna… the big adventure. The “team” had found this planet in the Milky Way and had plans to colonize it. The one drawback was there was virtually NO sunlight. Every part of Outpost 621 was going to have to be supported by A.I.s and computers. The humans were required for social abilities, forward trouble shooting, and to create an environment for a permanent colony. And here Luna was- identified as fourth generation, female, age 8, occupation- not identified as of yet. She felt so alone because her only kinship she felt was with the Data Storage of the Outpost’s history and Earth, those that started this project. She would ask her instructor in classes at various times about gravity, temperatures, survival, hybrid plants, vitamins and minerals only to have the rest of her class start howling and booing Luna. The instructor would quiet everyone, and then reply to Luna she would be taught about these things at a later time or the more devastating choice the instructor made was to tell Luna she had to leave class. If that happened, Luna accepted the dismissal note from the instructor and headed to the Life Subsistence Wing of the Outpost. At least she wouldn’t be laughed at for her curiosity, and usually she learned important information on plant and animal life, or about soil and air balances: The Botanical Wing. And today this wing was going to be filled with activity as the Botanical was designed with the translucent panes, and is where everyone will want to be “when the Sun comes out.” Luna had learned through her studies at the Data Archive Center that the sun only revealed itself on Outpost 621 every 99 years. This fact was barely mentioned in her instruction class, but everyone was excited, and knew something different was happening today. Mum finally called Luna to breakfast, and she ate quickly and headed off to class. She did not want to miss a thing today! She felt so special. She was going to be one of the fourth-generation voyagers to witness the sunlight. When she got to her class, she was one of the first students there. As the other young classmates started coming in, there was a strange quiet and reserve about them that Luna noticed. Finally, the instructor came in and addressed what was going to be the topic and lessons for today- Sunlight! Everyone turned and looked at Luna, and she didn’t know why. She was excited, expectant, but as always, the perfect student. Today’s topic and lessons was posted on the holographic board for accentuation. The whole Outpost would be lit by the sunlight for 2 hours between 11:10 and 13:09 today. Then the instructor began to give facts and historical data that she had gathered from the Archive about this wondrous phenomenon. Luna listened intently, absorbing information shared, hoping there may be a nugget or two of data that the instructor was relaying that Luna didn’t already know about. But she was watching the clock also, as was everyone in the class. Time was getting shorter and closer to the sunshine. Luna’s heart was about to burst with happiness. She knew today she could not call any attention to herself by asking questions. She knew what would happen. So, she sat stoic, with a smile on her face…waiting.

LUNA is a very young non-classified resident of Gliese 581 d, in the Andromeda Galaxy. She knows through the Outpost history that her family as well as other volunteers left Earth on this spectacular voyage. The settling of this small Outpost, over the last century, has grown and prospered. Yet, all the answers that Luna seeks, are consistently found in the Data Archives Center. The most important of which is “the Mission Statement.” This document conveys everything relevant to their past, present, and future existence. LUNA shares sixteen of her adventures with us, how she overcomes adversity, and invites others to join her. We are all pulled into this incredible experience as she willingly questions and addresses the colony, in addition to the reader. The designing Commission, before her, shared the stars and a new universe for others to follow. LUNA has the wisdom and ingenuousness to understand where she is. She will grow, share and go further with each adventure focused on the Mission Statement as her guiding light.

P S Morningstar is a retired CEO of an Identification & Security Company in Southern California that worked with many Fortune 500 companies and major Entertainment Studios. She has received awards in sales and quality, in addition to chairing exceptional fund-raising efforts for Non-Profits in the area. Her educational background in medicine and computing technology provided livelihood, yet writing has been her passion for many years. Her Native American heritage inspires poetry that is spiritual in nature touching the human heart. Her short stories are full of childhood memories that we all can relate too. Her initial book “Luna” describes the exploits of a young girl in the not too distant future recreating the elements of exemplary human ethics according to her ancestry from earth