a Wall of Hate

Made in the USA 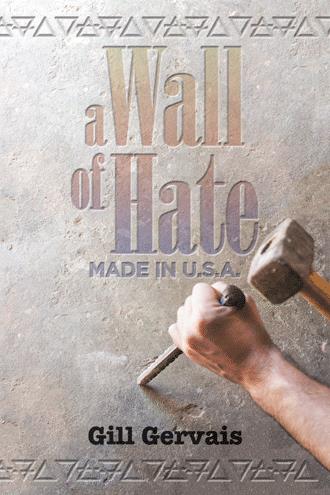 The year was 1945. The allies had defeated the most evil empire in the history of mankind. Everyone was ecstatic, positive, enthusiast and looking for a bright future ahead and to most, all was possible. Everyone was looking forward to create and live in a society administered by morally responsible individuals, where everyone would have a chance at fame and fortune and short of that, enjoy a good level of happiness, health and prosperity. They called it The American Dream. Yes the good times were here and everyone thought that they would stay with us permanently as we possessed the right formula to create the environment and life we desired. The joy of our military personnel returning home and the feeling that we lived in countries where the horrors committed by our former enemies could never happen, the abundance of food, supplies, almost free gasoline, greatly improved methods of transportation and communication created what is now known as the baby boom. Everyone wanted to raise a family with lots of children who would carry on the virtuous traditions and would be capable of defeating any monster empire that would dare raise its ugly head again. Yes the folks were happy! And good times they were. Almost everyone had an automobile, money was plentiful and one did not have to go without a job as there were so many good ones to go to if one was not satisfied with their present employment. Then came Rock and Roll with Elvis, the Beatles, the Stones, Dylan and many others and everyone was happily dancing to these new and so entertaining songs, and productions. The drive-in theater which was quite an innovation provided affordable, pleasant entertainment. Housing was expanding and we had comfortable homes to go to, a shorter work week with ample time for vacation and good times with the family or friends. That generation can still remember the excitement of the first brand new and shiny Mustang, concerts like Woodstock where they experienced total freedom and exerted their right to party and be a little wild without fear of religious or government intervention or control. They developed a concept of superiority that still influences many of our preconceived ideas, even today. They even created an institution that would prevent war from happening again, and despite the many critics directed towards the UN, they have been successful in exerting enough influence over the affairs of the world to avoid several conflicts from becoming serious enough to resort to military confrontation between former allied countries. Other countries that were submitted to any form of slavery caused by dictatorship or internal conflicts were provided help in the form of funding, expert advice and military action if this was judged necessary. Of course, there were conflicts and wars, most of which could have been avoided but overall, the West was free, strong and safe and the future looked even brighter with the certainty that we could never be attacked on our homeland and would never have to experience a holocaust like Europe did. But, the Baby Boomers, being more educated, well fed, having total freedom to do or create anything they liked, in spite of all the benefits they were reaping from former generations who fought for their freedom, started to develop a kind of anti-establishment attitude and became easy targets for anyone wishing to develop new and advanced concepts, and were eager to accept a form of brainwashing where they perceived a more enjoyable future with almost unlimited access to more money and goods. Instead of being considered a necessary tool for any society to operate efficiently, money became an end in itself and people started to view it as the ultimate power, the acquisition of which would make one strong, independent and masterful. Consumer goods production went through the roof. Keeping up with the Jones’ was an idea that became a sort of disease that would affect one’s happiness, self worth and peace of mind. One could not allow neighbors, friends or family to own a better house, a better car or have more money. Yes we became hooked on money but in the process, we forgot morality, decency, fairness and truth. Money was to be acquired by any means, even by methods that were detrimental to society in general and to certain targeted groups and we demanded more and even more. And this without much regards for the environment or the consequences of our actions, as ecology was not considered a priority or something worth considering as Mother Earth would provide, and surely replace the resources we had used. We were making big bucks and without our knowledge, we were just following a clever pattern designed to turn us into money and consumer goods addicts. And it worked. Corporations were making record profits, governments could direct people into dreaming of a better system, especially before an election. We became more and more centered on ME and generally we didn’t show much concern for organized society, the quality of our infrastructures or social issues, as we considered this the responsibility of elected officials still perceived as strong and honest. We are now living in a society where almost all has become political and the ensuing profound division cranked us up one against another. It is difficult to have a conversation with anyone without it turning to politics, racism, and other subjects so dear to the brainwashed who often express their beliefs in strong bully like words that disguise a threat or order that the other person should adopt their point of view. They usually support leaders that are rich, powerful, mouthy and totally ignorant of social environmental or moral issues and devoid of anything that resembles fairness to the people who elected them. Yes in 1945, America brought back most of their military and equipment back home with a horizon of lasting peace but they also brought back something much more sinister.

For the first time in the whole history of humanity, the responsibility of our evolution and even our survival is in our own hands. We can no longer be the passive witnesses of the wall of hate because we can give direction to our future. Whether we like it or not, we are the guardians of the evolutionary process now developing on Earth. This book is not entertainment This book can be disruptive Take heed upon what you enter

Gill, now eighty years old does not fit well within groups of his own chronological age. As he says himself,”I never acted my age anyway” A former commercial pilot/flight instructor, still enjoying hitting the sky as a private pilot, enjoying near perfect health and performing tasks normally performed by people half his age. Chopping wood, working with the tractor and gardening are some of his daily routines that keep him in good physical shape. A colorful character serving in many organizations, some considered esoteric, and an eternal student of the laws that govern the universe. Author of many articles for various publications, worked as a reporter for a large daily newspaper while publishing special articles weekly, author of a book called “Earth Fights back” published in 2015. He is ready to face the attacks that will surely come after the publication of this book and ready for the jokes about his age and second childhood. Married for 51 years to Suzanne, father of three children and called grandpa by 8 young people. Most people his age are traveling and enjoying their retirement but, as he says,”I cannot keep silent when the amazon is burning, and our social structure is in a state of complete chaos”