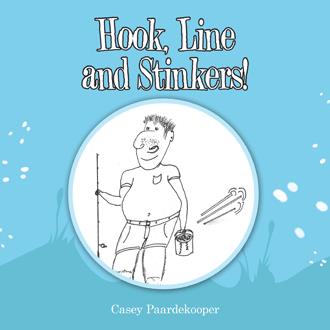 After the shock had worn off, Jo and Reels saw the funny side to what had just happened and decided that the octopus wasn't going anywhere. It could stay under the middle seat and remain fresh for dinner. Yummy fried calamari and chips, wow, what a treat! As it was still early afternoon, the boys thought they could get another 2 hours of fishing in so Jo cut the line and secured a new hook. The boys baited up their hooks and cast their lines out, Reels out the back and Jo out the front. With the river current running so strong, Reel's line passed under the tinnie without him noticing it. Jo felt his line tighten and slowly commenced reeling it in. Reels felt this tug on his line and got all excited. With Jo and Reels facing in opposite directions, neither saw what was happening. They both got very excited when their rods bent from what they thought was the catch of the day, they were evening calling out to each other "mine is bigger than yours" and "I will get mine into the boat before you" They struggled for quite a few minutes, each in turn putting that little extra effort into their reeling in. First you would have Jo leaning forward over the front of the tinnie and Reels leaning back, then Reels would get a moment of strength and gradually lean towards the back of the tinnie with Jo trying to resist the extra pull on his line. They didn't realise it but from the shore, if anyone was watching, they looked like a pair of windscreen wipers working in slow motion. In the meantime the octopus stuck its' head out from under the seat to see what all the excitement was about. With Jo and Reels each trying to get their catch into the tinnie, and with their backs turned the octopus thought the time was right to make her escape and slivered up into the middle seat and then with all her tentacles whirling made a run for it. Jo heard the slap, slap, slap sound behind him and saw the octopus slip over the side. At that moment, Jo had relaxed his grip on the rod and Reels had suddenly strengthened his hold and with a mighty tug pulled the rod clean out of Jo's hands. They both stood there dumbfounded, What had happened there? What was that all about? How did they get so tangled up? One minute they had the catch of the day, the thought of fresh calamari, fish and chips had them both salivating, the next minute there was nothing but disappointment written all over their faces. That was not fair; it is hard work trying to catch "The One That Got Away"

For those of us who enjoy fishing, there is nothing better than hopping into a boat and casting out a line. And we all have a yarn or two to tell to whoever will listen, about the adventures and predicaments encountered over a weekend away. This book is fun to read for the whole family.

Although this is his 1st Children’s book, this father of 3 and grandfather of 8 together with 50 years of marriage, has found a skill he enjoys immensely. He certainly has a great pool of untapped talent to call upon. He was diagnosed with Parkinson’s disease some 20 years ago, but wouldn’t let it drag down his enthusiasm to create great friendship through storyline and books.