The Unknown Life of Jesus

Channeled to the Inner Group of a Mystery School 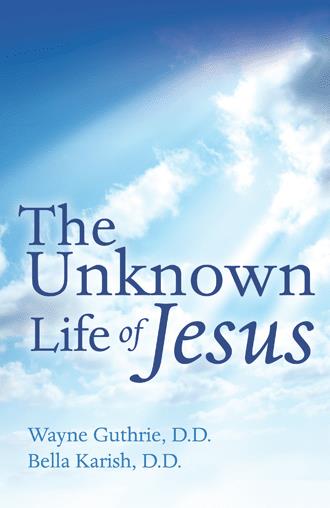 The Unknown Life of Jesus

One: Preparation for the Birth of Jesus
Two: Who Jesus Was
Three: Jesus and Judas Speak
Four: The Brotherhood of Jesus and Judas
Five: The Crucifixion Event
Six: The Bodies of Jesus
Seven: After Ascension - Travels and Activities
Eight: The Return of the Christ
Nine: Christ Consciousness

“We, in Spirit and with our knowledge, place before you these truths. This information may be difficult for you — perhaps it will shock you, perhaps it will change your life, and perhaps it will free you. If, in your own minds, you have already begun to think of the symbols and images in the crucifixion and resurrection of Jesus in relation to your own human beingness, you may understand that your beingness must be crucified in some way in order to be resurrected and ascend into the elevated Consciousness of the higher realms.

“If the information presented in these pages does not fit into your present knowledge and beliefs, it is simply placed before you to accept or reject.” ~ Eternal Cosmos

Part One
CHAPTER ONE

Mary, Mother of Jesus, Speaks of His Childhood

Eternal Cosmos (Dr. Bella Karish’s Spirit Band of Inner-Plane Teachers speaking through her): I bless you and enter in peace. We have an unusual entry who is willing to give you some information that, perhaps, will change some of your ideas concerning the childhood of the young boy, Yeshua [Jesus].

Mary, Mother of Jesus: It is pleasant to enter. It has been quite some time since I have been able to enter in this fashion, not only to such as you, but to the inner sanctums of those of other spiritual thought and other backgrounds.

Because it is important that He, my son, be known to many — that which He was within the normal habits of His daily work, play, and study — it is at this point that I begin, not within the pattern that gave Him birth, but with that which followed it.

At some other time, I will enter into His beginnings, for they are indeed important and deeply significant, filled with all that which relates to the spiritual plan.

I will start when He was still within swaddling clothes, placed into the time of His circumcision, as all were involved with such an action in that time if they were a son. Because there was uncertainty as to what could be used as a name for Him because of the questioning of those who were in the higher realms, not only in spirit, but also within human bodies, it was imperative that His naming be done quietly within the temple and not within the normal procedure of the home. We had no home at that time and were still traveling, still moving about, so it was impossible to receive family and friends in the normal fashion.

Taking Him to the temple, I dedicated Him to the life that I had been told He would demonstrate and manifest. A good child, He did not in any way seem to respond to that which, in the usual cases, causes much tears and sometimes temper by those who are circumcised.

However, following this ceremony, we left the temple quietly, accompanied only by Joseph who met us at the door of the temple — for within the temple protocol he was not allowed to enter because he was not His father in the true sense of the word. Another male priest held my son — someone that I will not, at this moment, reveal — and thus the child became part of the ancient priesthood from which He stemmed.

We took Him back to the area behind the Inn and stayed there a short time, and then, because of the turmoil and stress in the city, we left there, as you all know. This truly was correct. Leaving all of our belongings for the time being, we fled the city and for the first time moved out of reach of all those seeking to destroy this innocent babe, but it was quite important that we be informed about what was going on and that in some way the father be given the right to know, also.

We remained outside the city in a hidden place for a short time, and then returned fully prepared to take up the task of caring for this unusual child. We were constantly harassed, for all knew that He was not like others, and, many times in the beginning, I fled from wherever we were staying, hiding Him, covering Him with my skirt so that He could not be seen. Many times, we moved toward the river, and many times I sat by this child, holding Him, feeding Him, and giving Him all that was needed.

We had many friends, all good to us, all opening their doors and their homes, and before long we were no longer harassed. It seemed that it was indeed carefully handled.

This child was not like other children. At a very early age He could recall many incidents which did not seem to be part of our life of the time, nor even of my life, and He seemed to know people and what they were doing, where they were, and how they were acting in times of stress. At first, I tried not to allow this to be known, but His companions knew, and many of them, when He was only three, would come and sit with their mothers listening to what He had to say. Much of it did not make sense to me, I can assure you.

He talked of kingdoms, of countries unknown to us, of lands filled with blooming flowers and huge buildings, white with marble and stone. He described huge beings, beings we know did not live upon Earth at that time, nor had they been on Earth for quite some time. He would keep those who came to visit entranced with His words and His tales. The young — the very young — would stay quiet, and the older ones would listen and goad Him on to repeat many of the tales. Indeed, He spoke of strange lands that even I would have loved to visit.

As Yeshua grew older, it seemed that He had strange invisible companions and friends who spoke to Him, and many times He would move away from the rest of us to sit quietly in the corner of the room or outside in the fields, and always, if one was near, close to the river for He loved the water. In fact, many times He allowed the rain to wet Him and then the wind and storm to dry Him in order to stay beside the water as it moved in strength or calmed and became peaceful.

In time, Joseph, because it was important that my son be trained for something besides the temple work, gave Him the opportunity to learn and to watch him as he worked, but Yeshua seemed to want to learn much more than to be just an ordinary laborer.

Because we were unable to pay for the teaching in the temple which He desired, for we were not wealthy, and remembering He was not like others and thus could not enter the temple except within a different form in which He would serve others, we apprenticed Him to holding and keeping the altar lights in the temple burning, the oil lamps trimmed, and seeing to it that all of the places, the seats, and the entry ways were kept clean. He did this willingly in order to sit and listen to the ancient men chanting with their voices, singing the cantorial songs. He listened to their words and even though they could not teach Him, He learned much more than they seemed to be able to teach the others of His age.

“We, in Spirit and with our knowledge, place before you these truths. This information may be difficult for you — perhaps it will shock you, perhaps it will change your life, and perhaps it will free you. If, in your own minds, you have already begun to think of the symbols and images in the crucifixion and resurrection of Jesus in relation to your own human beingness, you may understand that your beingness must be crucified in some way in order to be resurrected and ascend into the elevated Consciousness of the higher realms. “If the information presented in these pages does not fit into your present knowledge and beliefs, it is simply placed before you to accept or reject.”
—Eternal Cosmos

Kindly click the cover image to see the book preview.

Wayne Guthrie, D.D. and Bella Karish, D.D., ministers of the Fellowship of Universal Guidance — a mystery school — came together as a team in 1960 to channel knowledge and wisdoms from Spirit, presented in this book on Jesus, and other books. Dr. Bella Karish functioned as the Sensitive, having the gift of looking into the past and being sensitized to specific Teachers within the Spiritual Hierarchy who guided her. Dr. Wayne Guthrie utilized his sensitivity, intuition, and knowledge of Spiritual Law as the monitor and mentor.