If God Were an Apple Tree 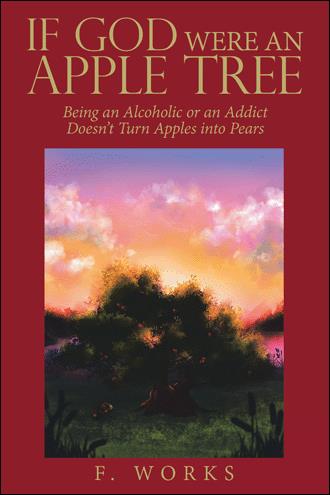 Who Am I? The reality of life is different for everyone. We all see the world through our own eyes. For example, in the home of my childhood each sibling has their own interpretation of what it was like growing up. What I will do is let you know what my life was like—through my eyes. Whether right or wrong, real or fancied, it will be how I viewed my life. Alcoholics Anonymous says that I suffer from a spiritual malady, an obsession of the mind and an allergy of the body that can only be relieved by a complete psychological transformation. Man is made up of a spirit, a mind and a body which implies more than one plane of life. This idea can be very controversial. With that thought in mind is it any wonder that we don’t see eye to eye. My spiritual malady began at birth because of the conditions I was born into. I was being groomed for the world while still in my mother’s womb. Whatever feelings and emotions she felt, I also felt. Think of the feelings that accompany both living in a dysfunctional environment and being pregnant while your husband is having an affair. My mother felt fearful about being abandoned. She also felt rejected and insecure. She wondered how she would be able to look after her children and was angry, resentful, bitter and discouraged. She felt betrayed and abused. My mother told me that my father was having an affair at the time she was pregnant with me. Her feelings would have been transferred to me. Since emotional perceptions are formed in a fetus at around five months, you can be sure I was impacted by her suffering. The emotions my mother was experiencing then were to be ones that I would be subject to as well. My mother and I were one at that time so what she experienced would be what I experienced. As I mentioned earlier, I can remember not feeling a part of the family I was born into. For the longest time, I felt that I was adopted, even though I actually wasn’t. I felt that I never measured up, that somehow I was different from everyone else. My two biggest questions were, “Who am I? and “Why am I here?” This is not about blaming—it’s about understanding. Take anger for instance. Wouldn’t it be better to understand anger than spend the rest of your life trying to manage it? Trying to manage anger is like going through life holding a tiger in a headlock. Anger itself is not the real issue. It is only a feeling and becomes problematic only when given more power than it deserves. If anger is a feeling that is influenced by thinking, the more energy we put into it the more difficult it is to control. Human beings are supposed to be in control of their feelings. We have the power to think and make choices. However, alcohol is given more power than it deserves and we tell alcoholics that it is the problem when in reality it is used only as a coping mechanism. Somewhere along the way we lost sight of who we really are and the power we possess. To say that an inanimate object possesses more power than what created it is insane. The problem is that our egos are so big we refuse to investigate our real potential. I felt angry as a kid—rebellious, afraid and full of fear. I frequently experienced feelings of worthlessness and inferiority. I also felt rejected, abandoned and resentful. Armed with the beliefs I picked up from my dysfunctional family and cultural environment, I formed a picture of the world and lived according to that view. Needless to say, I was on a path to suffering. The information I was feeding myself, based on the beliefs which influenced my thinking, was producing nothing but negative results in my life. Those results included jails, mental institutions and missed opportunities for personal growth. For a time I was even living on the street. Later, I experienced mandated programs, hospitalization, divorce, loss of friendships and some suicide attempts. It wasn’t until people began challenging my beliefs that my life began to change. You cannot rise above a belief, but you can change it. The first person to challenged my beliefs was Tom Whittaker, when he said, “How old are you?” “Twenty-eight”, I replied. “Fucking near time you grew up and took your diaper off, isn’t it? When are you going to start participating in your own life, don’t you think your childhood lasted long enough?” That was my first introduction to Tom and for some strange reason I didn’t react to him the way I usually did to people. I took it. There was something in the way he said it that was tough, but caring. His words were also true! But Tom saw something worthwhile in me that I didn’t even see. Tom was not the first. Periodically, throughout my life, there had been people who tried to encourage me. “When the student is ready the teacher will appear,” apparently is true. Up until that time I didn’t believe I was worth anything and I had nothing to offer anyone. I had never felt wanted, needed or loved before. That is not to say that I wasn’t. But I just never felt it. Before my encounter with Tom, while I was still in a detox centre, the nurse told me to phone one of my friends and request a ride to the halfway house at the other end of the province. For the first time in my life I came to the realization that I had nobody to call. I believed that I had no friends. People would say that they were my friend, but I didn’t believe them. If I didn’t like me, how could I believe anyone else could?

Are you frustrated because your recovery program is not providing the results you had hoped for. Have you stopped using yet still exhibit the same destructive behaviours as when you were using? Do you want to know the difference between recovering and recovered? Author F. Works had experienced twenty-one years thinking that he was sober before he realized that he hadn’t really known what sobriety truly meant. In a fortuitous meeting one day he was asked a question that changed his life. In If God Were an Apple Tree, discover Doug’s path to true sobriety and actual recovery. That discovery could change your life.