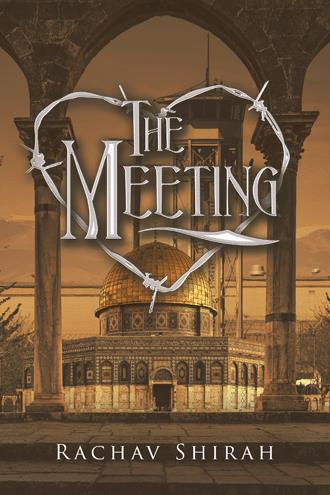 The Jewish mystics believed that divine beings sometimes came to earth in human form to teach us how the creation should be joined back together so there would be harmony in all the worlds. Some of these divine beings took the form of prophets and kings; others became writers and teachers; and some of them became soldiers and some of them became prisoners so the poets and lovers among us could be set free. Every time I drove to the prison to visit my husband Yoel, I felt like I was being transported back in time to the war, to the holocaust in Europe in the 1940's with its concentration camps; at other times, I felt as if the northern Arizona landscape had mysteriously vanished and I had been deposited by some invisible force on a dusty road in the Negev and was approaching a solitary outpost in the sunbaked desert of southern Israel, the land of the biblical patriarchs Abraham, Isaac, and Jacob, theland that my heart embraced, the land whose very dust and stones were one with my soul, theland from which my Yoel's spirit sprang --- a sturdy tree planted in the Land. . . . “There's someone here I want you to meet.” His eagle eyes softened as he looked into mine. “I know how much you love Israel.” It was true, what he said. Yoel and I had often talked about making aliyah when he got out. To a Jew, to make aliyah meant to move permanently to the Land to live. In ancient times, to make aliyah meant to go up to Jerusalem to offer sacrifice and to worship in the Temple. King David had written magnificent psalms about this spiritual pilgrimage, about making the ascent to Jerusalem. For as long as I could remember, I had dreamed of making my ascent --- of walking in the places where the patriarchs had walked, the places where I knew my soul could hear the voices of the prophets whose passions still infused even the stones and the dust and the ancient oaks that had witnessed those times, the places where the Messiah would build his kingdom of peace. I longed to go there, to draw water for my soul from the wells that Abraham had dug. . . . . . . It was instinctive to my Yoel, a gift of spirit that, like some kind of discerning sage, he always seemed to know which souls should be brought together for their own illumination and for some greater common good. . . . Where had I known this man? His hand was ruddy, the bronze of the desert in flesh. When I grasped it, I felt an electric surge of energy through me, an energy akin to a recognition, and I knew in this moment with complete certitude that this man was well acquainted with love, that he knew how to arouse love in a woman, how to possess her spirit, how to awaken her soul. . . . I kept seeing the three of us . . . together, like one being, one vast soul, as vast as the Land, whose passion was too great to be contained in only one body.

Tahara, a devoted Jewish wife, goes to the prison for a conjugal visit with her beloved husband, Yoel. Go with her as she makes the shocking discovery of a hidden dimension of the heart, which plunges her into an anguished inner battle to determine who the real pure warrior in her life is. In an incredible encounter, she learns that propriety is no match for the wisdom of a timeless master of love who sees with eagle eyes and gently leads her to surrender to the true desire of her heart.

Rachav Shirah is an American-Israeli writer with a Master of Arts in French Literature and a long held interest in Jewish mysticism. She has spent much of a lifetime writing poetry and stories and keeping notebooks of her dreams during sleep in which she recorded the many visitations of an Israeli warrior lover. “Writing the dream texts, which came from somewhere deep in the heart,” Shirah explains, “taught me how to craft stories in a way that confronts the reader and draws her into the boundless world of the self that accepts her whole being, not just the ‘allowed’ parts. As the immortal Pascal attests,” she continues, “‘Le coeur a ses raisons que l’esprit ne connaît pas’ (The heart has its reasons the mind does not understand). Writing “The Meeting” was an exercise in stillness; it forced me to stop, truly listen to my heart and to what I was feeling, and to acknowledge that message as a valid inner truth, even if that truth appeared to conflict with defined external boundaries. My hope is that this story will do the same for the reader.”