Save Yourself Before Normal Kills You

Ascension in the Age of Chaos 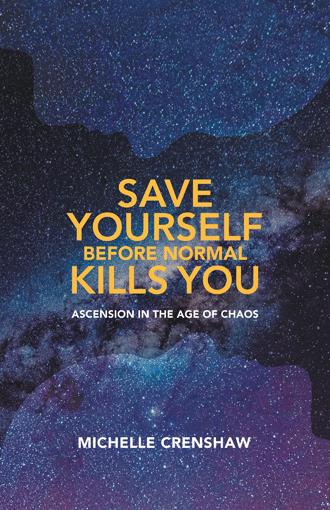 The problem we face in the current “normal” paradigm, however, is that a barrage of subliminal, and often overt messages, are being downloaded into our personal EP without our conscious awareness or consent. Because these messages, masked with deceptive double-speak woven through all areas of life, e.g. school, work, church, news, politics, advertising, etc., most of us have been unable to avoid their influence upon our world view and ourselves. Since these messages debilitate our ability to think independently, the unfortunate outcome is the pervasive de-evolution of our collective social and spiritual condition. As we download a daily dose of fear, anxiety, complacency, apathy, ignorance, intolerance, aggression and hate, most are unaware they are being manipulated. More disturbing is the fact that this global mind-ware has been created by and for the benefit of an elite community of beings whose minds and morals are, unfortunately, completely and utterly corrupt. In this paradigm, this mind control project touches almost all people in almost every part of the world. In this paradigm, the needs of the few, clearly outweigh the needs of All and The One. And that, my friends, also seems perfectly normal to most. Since you’re reading this book, you probably already realize that the current “normal” is anything but normal. You are also probably aware that your thinking is being manipulated; at least to some degree. At minimum, almost everyone is familiar with the New World Order global agenda of recent times. Surely you know that the designers of this world order possess the tools and the intention to control the thoughts, experiences, and behaviors of billions of people over many generations. You know this much even if you pride yourself on being too spiritual to pay attention. Finally, you must surely know that we have become a global community of spirit-souls who have lost our deductive reasoning skills, our ability to think independently, our intelligence, our creativity, intuition, and collective divinity. It’s okay if you don’t know these things because you will know by the time you finish this book! Therefore, if you truly wish to save yourself from an imprisoned mind, you must “unlearn what you have learned”. For according to the man called the Prophet Isaiah, “All we like sheep have gone astray; we have turned every one to his own way” (Isaiah 53.6). As such, we have surely only learned whatever the System operators want us to learn and little else. As generations pass, our collective and singular minds’ ability to unlearn lies and relearn ancient inner-standings, becomes more and more daunting and less and less attainable. As a global community, we are surely in very dire straits, as is evidenced by our current world condition. The pervasiveness of man’s inhumanity to humankind is the definitive proof. For thousands of years of false programming has apparently prevented us from waking up and saving ourselves from imminent moral and material destruction. For this reason, I believe all organized religious institutions have an obligation, to facilitate quantifiable acts of peace, global unity, equity, self-love, self-esteem, appreciation of all difference, and recognition of the shared divinity of all humanity; and nothing else. For there is no need to evangelize, proselytize, or convert masses of followers to one belief system or another because ultimately, we are One Humanity and One Spirit. To date, however, most organized religious institutions still preach their religious principles in a vacuum of sameness of belief, repetitive ritual, and isolated exclusion from opposing doctrines. Many of the religious elite are experts at beguiling their constituents with slogans, rituals, generational traditions, doctrines, and other group mind control tactics. These strategies insulate individual and institutional communities from their connection to the greater global condition. The outsiders are called sinners, heathens, infidels, unclean, or lost. If we are really religious, we go somewhere, sometime and pray that the world will miraculously become a better place. Then, we turn around and send our sons and daughter off to war to destroy entire countries around the world in the name of religious and political freedom. In this manner, religion has surely failed its commission to bring peace, wisdom, truth, love, unity, spirituality, and harmony to humanity. The reality is that the “Holy” Wars changed the course of history for the entire world and turned out to be most unholy, to this day, for the global family. No. Organized religion, as it has existed for thousands of years, cannot save you! For according to the Catholic News Agency, approximately 84% of the world population identified with some religious group as of 2012. The breakdown includes 3.3 billion Christians, 1.6 billion Muslims, 1 billion Hindus, almost 500 million Buddhists and 14 million Jews. Now, wouldn’t you think that the world would be a much more peaceful place with nearly 84% of the global population practicing some form of spirituality? Though these religions purport to promulgate peace, unity and righteousness, the world, filled with chaos, is the undeniable evidence of man’s propensity for hatred and self-destruction. Thus, people against people, and nation against nation, war, slavery, and oppression upon oppression continues as the perpetual “normal” paradigm for the modern world.

Save Yourself Before Normal Kills You challenges you to question everything you believe and why you believe it. In doing so, freshman author and rogue scholar, Michelle Crenshaw, offers a pathway to personal liberation and spiritual ascension in the “age of chaos”. By applying her “Ascending Mind” principles, readers awaken more personal awareness, inner-standing, self-esteem, purpose and peace. “Save Yourself” also boldly trumpets a call to action for those who dare to confront the illusion of limitation with confidence, clarity, truth, divine wisdom, purpose, common sense and purposeful action. If you’re ready to let go, question everything, think for yourself and live free, “Save Yourself” has found you! After all, “what kind of life are you living anyway?”