How to Grow a Beautiful Life 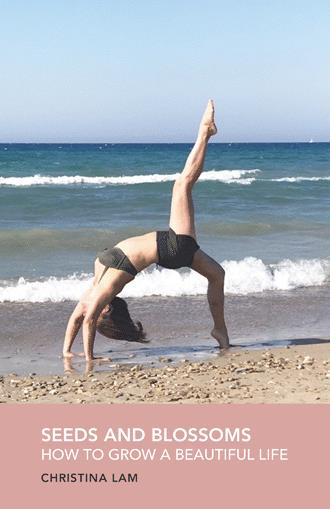 In 2016, I was in Glastonbury for a festival. Not the festival, I should say: this was a three day yoga festival: much more my cup of tea. You may or may not know that Glastonbury, besides the music festival, is famous for its spirituality. Ley lines and earth energies are said to surround the place, and myths and legends abound regarding the area’s history. King Arthur is said to have visited in search of the Holy Grail, while Joseph of Arimathea is said to have brought the holy chalice – which was used at the last supper – to Glastonbury. Glastonbury Tor has even been described as the ‘Isle of Avalon’: the vale between this world and the next. In short, Glastonbury is a spiritual mecca. On the final day of the festival, my daughter and I were lazing in the summer heat, resolved to spend the last day of our trip doing very little. Peacefully people watching, the sun warming our backs and the open fields and rolling hills of Glastonbury stretching as far as the eye could see, it was easy to see how those spiritual myths and legends might have begun, all those years ago, and why Glastonbury’s reputation as the spiritual heart of the UK remained unchallenged, thousands of years later. Of the people that we watched, one character in particular had caught my eye. Elona Woods, the sign beside her stall declaring her to be a clairvoyant and medium, had seemed to have an enormous queue for the duration of the festival. Not only that, but her customers seemed more than satisfied with the results of their readings. My daughter and I, more than a little sceptical, had been astonished to see customer after customer nodding enthusiastically at Elona, seemingly utterly convinced by her readings. ‘How can people believe this stuff?’ My daughter and I found ourselves saying again and again, as we watched yet another customer leave Elona’s stall with tears in their eyes. Surely, we pondered, these people understood that so called psychics peddled their trade by spouting generic nonsense to vulnerable fools? Eventually, as the crowds began to dwindle and most of the festival goers had headed home, curiosity got the better of me. Her queue had finally gone and, tentatively, I approached Elona. ‘Are you free?’ I found myself asking. My daughter watched on, wearing a sceptically furrowed brow, as Elona asked me to sit down. Her response had caught me off guard: I had expected her to tell me that she was about to pack up and head home herself. Instead, with no discussion of payment or whether or not I’d like a reading, I found myself sitting across from this mysterious clairvoyant as she pulled out tarot cards and, without asking me a single question, began to talk about my past and my future. At first, I remained wary. Although many of Elona’s comments about my past were accurate, I was sure that this must be a trick of the clairvoyant’s trade, and although the wonderful predictions about my future were intriguing, they were of course impossible to verify, and I laughed them off politely. It was towards the end of the reading that something very strange happened. Elona looked me squarely in the eye and asked me a question. ‘Did you know that you have an angel sitting on your shoulder, and his name is Gabriel?’ I felt a chill run over me, and goosebumps formed on my arms. I felt both touched and afraid and, as if from nowhere, began to cry. Once I had started, I couldn’t stop: the tears ran down my cheeks like a river and, like the other customers that I had been so bemused by moments ago, I found myself nodding enthusiastically. ‘Yes,’ I told Elona. ‘I do know it.’ In that instant I felt as though I had always known. I glanced over at my daughter - my cheeks still streaked with tears - and saw in her expression how baffled she was to see her mother become yet another duped customer. But the truth was, whether it was Elona Woods’ insight or an epiphany of my own, I have always felt the presence of a guardian angel sitting on my shoulder. I have always known that if I want something from life, I need only ask for it, and it will materialise. As I sat across from Elona Woods and thought about all blessings that life has brought me – the opportunities, the experiences and the relationships – it was easy to believe that an angel had been guiding my path.

My hope is that by sharing the events of my own life, as well as the attitudes that have shaped it and the lessons that has taught me, I may benefit those who find themselves reading these pages. I hope that by reading, the reader, too, might be able to find more joy and freedom in their own life and that their happiness may blossom as mine has.

It was in the state of reflectiveness that she find herself one morning sat in her conservatory, notebook in hand. Looking across the sweeping lawn of her large beautiful garden and felt the pleasant tingle of the underfloor heating beneath her Italian marble floor and felt overwhelmed. Her horizons had not always felt this broad, her life has not always felt this abundant. It was not to much that her former self had not dared to dream of these things but that she had not known that such things existed, in terms of geography, opportunity and happiness. She has come a long way in her five decade on earth.