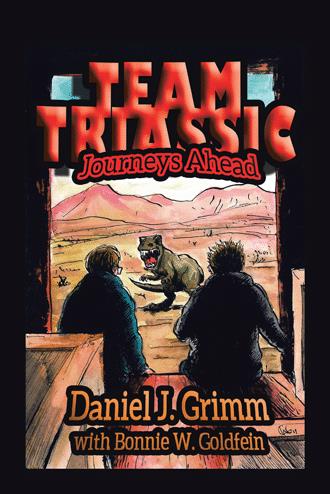 Chapter 12 Just about everybody in Las Vegas knows that the primary reason we formed Team Triassic was to prepare for another assault by one or more rogue dino hybrids like last year’s SpinoRex. We all knew that it was only a matter of time before whoever created the beast I fought at Molasky would threaten our city with more dino hybrid mayhem. This meant that our training protocol focused on battle tactics we would need to know to repel these oversized beasts. This narrow focus for our training changed when Xander joined us. Two incidents in his second week with us showed just how traumatized he was. The worst one took place the day we decided that one way to make Xander feel a part of our Team was to let him participate in one of our realistic training exercises. Since he had no dino DNA, we thought it might be a challenge for Andy’s and Matthew’s “super-sniffer” dino hybrids to locate Xander if he hid in a place where other humans were around. It was a slow Friday for us and Andy’s work shift had been cancelled, so it seemed like a good idea – at the time. Privately that afternoon, I had asked Lynnelle to take Xander over to the Red Rock picnic area where he could find a good hiding place. Before they left, I pulled Xander aside. “Are you ok with this, Xander?” I asked. “I know you are scared of dinos – with good reason – but these are Team Triassic dino hybrids and this is only a training exercise. They won’t hurt you.” He said, “Sure, OK, I guess,” but he didn’t sound convinced. “Let’s consider this part of your Team Triassic training then, ok?” That seemed to make a difference to Xander. He brightened a little and said, “Whatever it takes for me to be part of the Team. Let’s do it!” After Lynnelle and Xander had left for Red Rock, I called Andy and Matthew on my holo. “Meet me outside the gate in five minutes,” I told them. “I have a new training challenge for you.” Matthew arrived first. When Andy joined us, I said, “OK, guys, today I want you to find Xander.” “What – Is he missing?” Andy asked, sounding concerned. I laughed. “No… He is your training challenge for today. I want you to sniff him out. He’s away from Lone Mountain. That’s all I will tell you. Except for this: Remember that Xander has been traumatized by dinos, so DO NOT TOUCH HIM when you locate him. De-morph when you are at least five feet from him. Then call Lynnelle to come pick the three of you up. Got it? “Got it!” Matthew said and Andy nodded. Without another word, Andy morphed into his Avian Sinustrodon and Matthew into his Velociospirus. The two quickly sniffed Xander’s jacket, then they were off. Not even twenty minutes later, I saw Andy’s Avian Sinustrodon in the air coming back to Lone Mountain. Matthew’s Velociospinus followed closely on the ground. As they approached where I was standing, I saw to my horror that Andy was holding a very limp Xander in one of his claws. My brother swooped to a landing, de-morphing as soon as his feet touched the ground. He was just placing Xander on the ground as Matthew arrived and de-morphed. A completely terrified, sobbing Xander curled into a fetal position up against a cypress tree trunk, covering his head as though he expected another assault. I couldn’t believe my eyes. I ran over and knelt down next to Xander, reached out my hand to touch his back to comfort him, but then thought better of it. Without touching him, I spoke softly, “Xander, talk to us. Are you ok?” Xander said nothing as he continued to sob and shake from fear. I stood up and marched over to Andy and Matthew, furious. “WHAT THE HELL! I TOLD YOU TO NOT TOUCH HIM!” I screamed. “I- I forgot. I just got excited when I saw him…” Andy said, looking down. “THAT DOESN’T MATTER, ANDY! I TOLD YOU STRAIGHT UP TO NOT TOUCH HIM! He’s still overcoming a long-standing trauma. WHAT WERE YOU THINKING?” When I turned to Matthew, he shrugged. “I got there late,” he said simply. I was beyond furious then and I didn’t really trust myself to act rationally, so I just said, in a quiet but firm voice, “Andy… go home.” “What -- why?” Andy asked. “Just grab your stuff and go home,” I said. Andy shook his head with a sad look on his face. For a minute, I thought my big brother was going to cry. Then he went over and knelt in front of Xander, making a point of not touching him, and said with real compassion, “I’m sorry, man.” Xander still said nothing as he continued to shake. I put my hand on Andy’s shoulder. “It’s time for you to go,” I said. Andy stood up and walked through the door to Headquarters. He looked like a beaten adversary and I felt sorry for him. After all, he’s my brother. But he really messed up that day. My biggest fear was that this incident would set Xander back too much. He had been so eager to be part of Team Triassic and – until that day – he had been making great progress in learning self-defense and martial arts. Although I hadn’t told Matthew to leave, he followed Andy into Headquarters, putting his arm around Andy’s shoulders and leaning close to talk to him. I hoped he was saying things that would help my brother recover from making such a horrible mistake, telling him our Team is strong and we could – and would -- deal with it. These are things I simply could not say to my brother at that time. 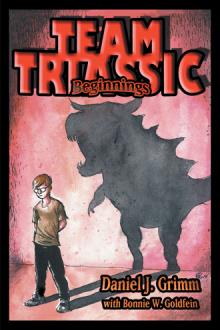 The teens of Team Triassic who came together in book 1 now have a state-of-the-art training facility in Dr. Robertson’s $25 million laboratory on Lone Mountain. There they train for battles against rogue dinos, and some undergo dino DNA upgrades in the lab. It’s all just in time as Centennial High School suffers a deadly attack from enormous rogue dino hybrids, an attack that calls on every team member to limit the carnage and help the wounded. In book 2, we meet twins Xander and Sebastian while we learn more about Nick, the team, Dr. Lingard, and Daniel, who faces an unexpected departure and a mystery threat at the tree house. Hmm . . . who’s back in Las Vegas?

Now 17, DANNY GRIMM has completed the second of a 6-book series that follows the adventures of a group of teenagers right out of his imagination -- the dino-human hybrids of Team Triassic. Along with the demands of high school classwork, this young author is heavily involved in both school and community theater productions. With his Oregon grandmother Bonnie Goldfein as collaborator and editor, he writes daily to ensure that fans of Team Triassic have a newly published adventure to enjoy each year. Danny lives in Las Vegas with his parents and brother, a King Charles spaniel called Max and two bearded dragons named Tom and Jerry.